"golden zebra loaches" are often botia histrionica...not the same as "zebra" loaches (striata). They could be histys or something else. Yep, too tiny to tell. The last several years I've seen mixed little loaches. I could tell the species of some but not all, too small. Kubotai, yoyo, histy or rostrata? Just for easy guessing. I prefer to buy 6+ of 1 species at a time.

I got my only striata loaches from a Petco years ago. They were labelled yoyos & were sold to me as that even though I found a book that had pics. They didn't have code for striatas...I quit arguing & bought all 6 they had, lol.

Are there any dots between the Y or solid stripes? That would be very young yoyos...they all change to some extent over time...

I loved my histys, smaller & more mellow than yoyos.

One has a dot but mostly striped. 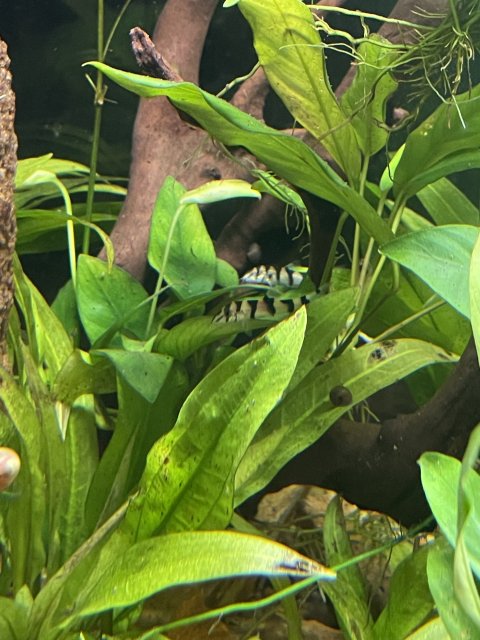 I see the dot but can't tell, sorry. The larger lower 1 could be a histrionica; the upper maybe? a yoyo or a younger histy. There's a difference in tail & dorsal fin markings too I think...I don't know if those change over time too. I believe there are hints in the loaches.com species index, I just don't recall...almost bedtime, lol.

The loaches stick together most of the time.

The giant bettas I ordered arrived and are active and healthy. They are currently exploring the tank and weaving around plants. They are larger then I thought they would be but the 40 is a great size for them! 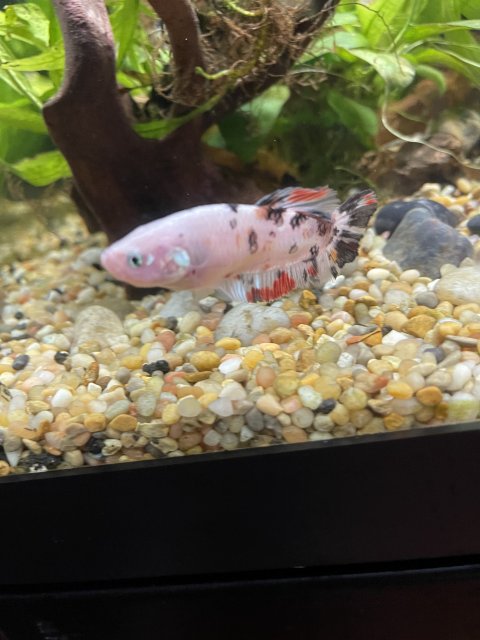 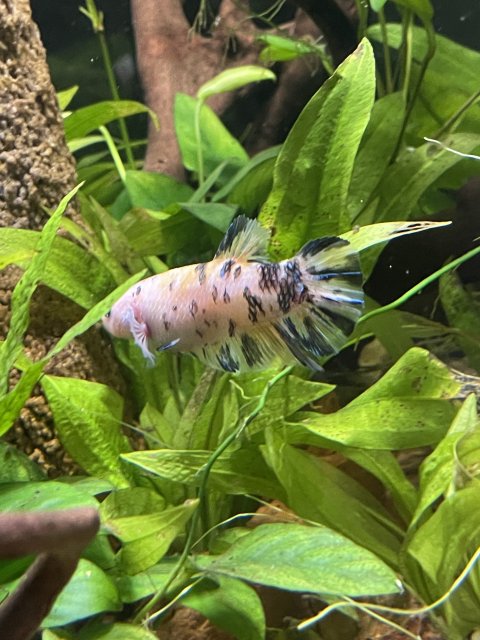 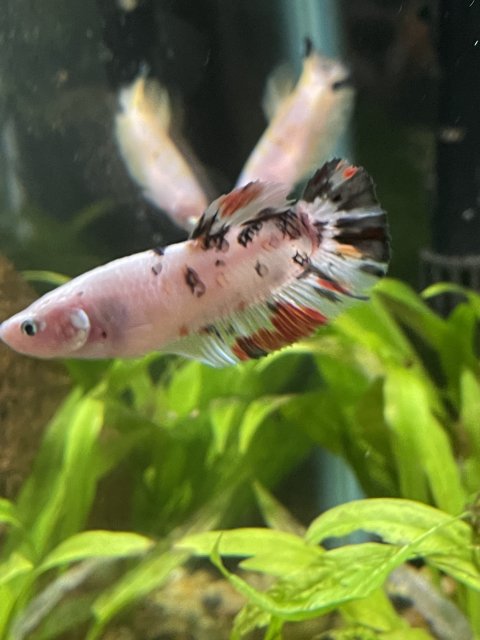 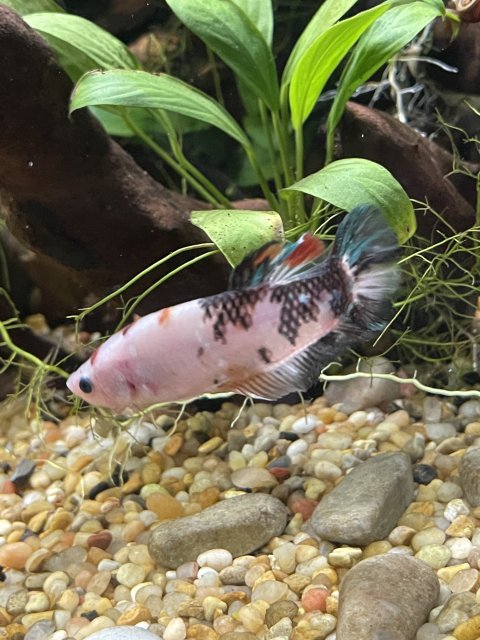 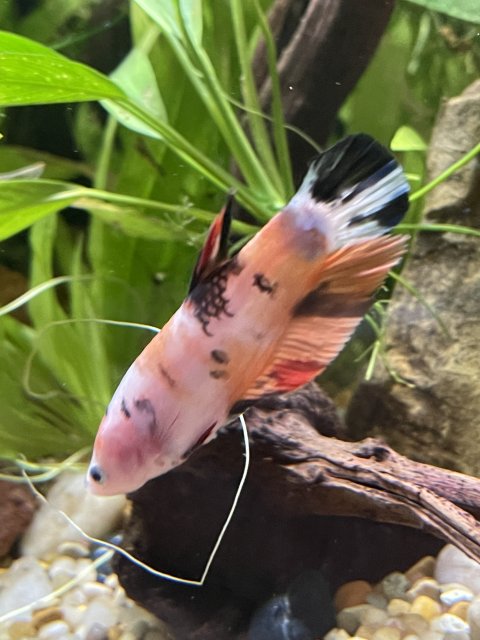 Yea i ran into this problem. I ended up with a mix of gold zebra and yoyo from petco; unfortunately the gold zebra after a year all jumped out at nearly the same time. I had the back covered and a glass canopy but they still found a small hole and in sequence zip through it; the yoyo did not jump. This was a 120.

I had these loaches before but gave them to my dad. He somehow killed them after awhile, I think lack of water changes.
I have 3 of the loaches currently and they zoom around for food and nibble on the rocks and plants.
My giant bettas make them look smaller now. 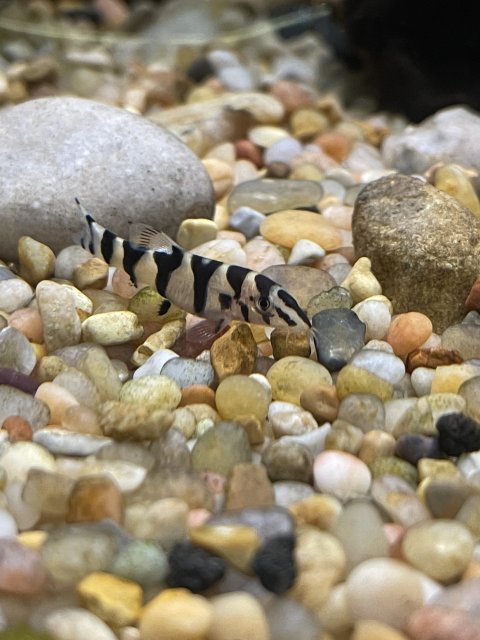 With those nice pics, I'm guessing histrionica loaches. I loved mine!

Which is a Burmese/zebra loach.
F

Look up botia histrionica, I think they're called "golden zebra loaches". "Burmese border loaches" are b. kubotai...not your fish. They show a bit of lateral line darkness even when pretty small. Yoyos (b.almorhae, takes a while to develop) show little dots between the "Y" shaped vertical stripes even when small. The "O" of yoyo doesn't show up for a while as the "dots" grow. I don't see that in your fish.

Zebra loaches are b. striata, fine pinstripes. I can say for sure that's not your fish. Botia rostrata (ladder loach) is similar to histy, yoyo, etc when small...but they're much less common. They show signs of dark parallel vertical lines with some gray in between

I still vote b. histrionica for your loaches. Check out head shapes too, some have longer "noses"; some more rounded...& tail & dorsal stripes are different in some too...

I would agree they are more likely to be golden zebra than yoyo loaches; though at a young age they are very similar. The pattern will change several times as they age (though i think it changes more on the yoyo). One problem i had with golden zebra is they will jump after about 18 months (or at least mine did). They are quite proficient at finding the smallest hole. None of the yoyo jumped so I wonder if this is a behavior thing. I have netting on the back of the tank where the normal slit is behind the glass canopy but they still found small holes. I even had one jump while I was doing a water change and the front was open for the python.
You must log in or register to reply here.
Share:
Facebook Twitter Reddit Pinterest Tumblr WhatsApp Email Link
Top Bottom