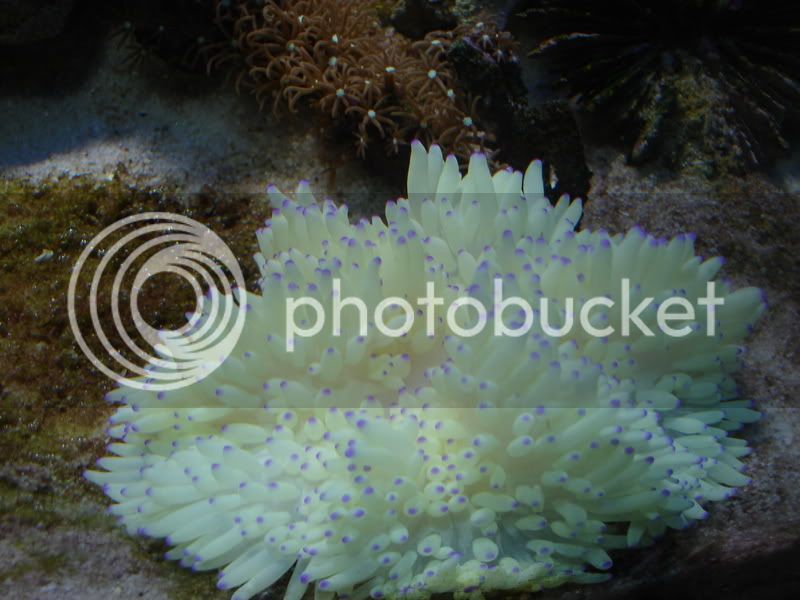 Just bought this, I believe its a bleached Sabae, but not 100% sure. LFS had it labeled as a "Flat Anemone"

The picture was taken Monday night, I bought it Monday afternoon. Since then, I moved it once since Monday night it moved partially on the front glass. So I moved it in a divot in the sand and seems to have dug its column in and fully opening. The tentacles also seem to have elongated more, and seem less plump.

Its taken mysis shrimp from my normal daily feeding routine and small chunks of raw shrimp. But the fish, including the clown that has bonded with it, have been snagging the food from the tentacles.

In my 65G tank and its almost directly below the MH at a depth of 24".

Anyone want to confirm my ID and advice on helping it color up and thrive.
Expand signature
Write a wise saying and people will remember your name forever
~Anonymous

I think your ID is correct maybe this site will help http://www.talkingreef.com/forums/anemones/5644-help-sabae-anemone.html
Expand signature
[rbishop] 8:12 pm: I was innocent...

Yeah, that's one of the pages I used to help ID it since the picture was basically picture perfect to mine. But wanted a second opinion and wanted to see if anyone here might have so additional advice or updated tactics on nursing it back.
Expand signature
Write a wise saying and people will remember your name forever
~Anonymous

did none of the posts in that thread help?
Expand signature
[rbishop] 8:12 pm: I was innocent...

It was informative, but I don't visit that forum like I do here at AC. Would perfer to receive advice from people that I trust from other post and I know are knowledgeable, compared to a bunch of unfamiliar screennames.
Expand signature
Write a wise saying and people will remember your name forever
~Anonymous

That may be a little low in the tank for a sabae, even under MH lighting. What wattage MH? What bulb? I am not sure of the feeding habits of those but my experience with condys and btas, they would react to the food touching, the food would stick and they would pull the tentacles into their mouth, like licking your fingers. Try target feeding it just towards the center/mouth. No real need to cover it all with food particles.

I've read that some corals/anemones with zooxanthelae can acquire it by eating it. If all its symbiotic algae has 'abandoned' the anemone then it has to get all its nutrition from feedings. Even in the wild, corals that get energy from algae and feeding can not sustain themselves by eating alone when they bleach.
You may need to feed it everyday until it gets some of its algae back (if that happens).

Perhaps getting phytoplankton from a lfs and placing some in a "breeder tank" with the anemone within the main tank? Do they sell live phytoplankton anywhere?

The bulb is 175w HID Aquatic Life fixture with T5 acintics, its a new company and a newer type of MH that is popular in European car headlights.

Been target feeding with chopsticks every couple days and last night it did actually close up around the food. The clown also started to try to either store food in it or feed it. It is also been grabbing mysis during the feeding like I said.
Expand signature
Write a wise saying and people will remember your name forever
~Anonymous

If your clown has been feeding it, then it accepts it as a perminent home. That placement may be okay for the sebaes, but it will depend on the actual anemone sometimes. It looks alright to me. A bit pal, but not too bad as far as sebaes go. Keep feeding it and it should be alright. They aren't as easy as condis, but they aren't the most difficult. And they can't actually eat phytoplankton. You were right feeding it mysis. silversides is also a good choice, as your clowns will have a harder time steeling it and it's much larger.
Expand signature
"You really are the Tim Taylor of fishkeeping Fishie."
You must log in or register to reply here.
Share:
Facebook Twitter Reddit Pinterest Tumblr WhatsApp Email Link
Top Bottom