Angelfish with huge lips~time to euthanize?

My poor angel, I've had her about a year and a half. Several months ago she began to get slightly enlarged lips, but I didn't think much of it. Over time they've gotten fatter, but again I never thought much about it, just thought maybe it was some peculiarity, a bodily defect maybe. Then the past few days they got even bigger, so I googled it and discovered it's a virus affecting some female angels. Really nothing to be done, some people have attempted surgery by cutting off the growths if they were easy to distinguish from the actual lips. I only saw one fish to survive such a procedure, and my fish has both lips swollen, I'd never be able to cut them both off without a lot of trauma and bleeding. Has anyone ever heard of this, is there any other treatment to try? I have tested the parameters using an API test kit, everything is normal, and all other fish have been fine all these months. My angel is beginning to have trouble eating. I haven't been able to get a good pic, so just imagine two fat lips.:help:
Expand signature
~46g w/angelfish, cherry barbs, lemon tetras, bn pleco
~29g w/swordtails, ghost catfish, neons, female betta, bn pleco
~37g w/3 juvenile fancy goldfish
~20long w/swordtails, mollies, zebra danios
~14g w/guppies
~600 gallon goldfish pond w/frogs

Euthanizing a fish really comes down to the owner's judgement. You're really the best one to make the call. I think most people would agree that it is a last resort, but to me it sounds like you would be fighting a losing battle. Good luck with your decision and sorry it may have to come down to this.
Expand signature
​20 gallon long planted
My carnivorous plants

Did you find a name for this virus? It might be worth doing further reading, maybe even consult a vet who does aquatic work (by email I would imagine) and see if anybody is doing research on this. Maybe they would take your angel for study or testing of possible treatments. It would be sad but better than just putting her down to no purpose.

Thanks, you can google angelfish lip fibroma to read more about it. Apparently the tumors/growths are extremely tough to cut, too. Every time I look at my angel and consider cutting off those lips/growths I feel positively faint.

I just found this discussion thread for you:
http://www.angelfish.net/VBulletin/showthread.php?t=7772

Ugh, after reading it through I guess I will be trying the surgery today. My angel couldn't eat breakfast at all, so this is her last chance. Instead of this being viral, there is some thought that it is genetic. What a horrid thing for both the fish and their owners.
Last edited: Aug 13, 2012
Expand signature
~46g w/angelfish, cherry barbs, lemon tetras, bn pleco
~29g w/swordtails, ghost catfish, neons, female betta, bn pleco
~37g w/3 juvenile fancy goldfish
~20long w/swordtails, mollies, zebra danios
~14g w/guppies
~600 gallon goldfish pond w/frogs

Oh my god... Parden my french, but I can't believe you actually went through with it! I wouldn't, ever ever ever, be able to do that. I've got serious respect for you!! But do let us know how it goes. Poor girl. It makes me wonder if they ever could grow back. Lets hope not!!

Thanks, it was dreadful, but she actually wanted to eat a few hours afterwards. So I gave her a few small pellets, she seemed so surprised when she was actually able to get them in her mouth! The flesh is ragged along her lips, and bloodied in a couple of spots, it looks terrible right now. But already she is active and behaving almost normal. If I can just keep the water clean and infection away she'll probably recover, some of the angelfish in that thread did fully recover. At least one required 3 surgeries but I think had so far lived another 3 years and counting. I never would have been able to go through with it if I already weren't facing euthanizing her, I bought the clove oil yesterday and my eyes watered every time I looked at the bottle. At least I have tried to give her a chance.
Expand signature
~46g w/angelfish, cherry barbs, lemon tetras, bn pleco
~29g w/swordtails, ghost catfish, neons, female betta, bn pleco
~37g w/3 juvenile fancy goldfish
~20long w/swordtails, mollies, zebra danios
~14g w/guppies
~600 gallon goldfish pond w/frogs

I'm with Petropulo, serious respect!! I don't think I could have done it, for one thing my hand isn't steady enough in such situations.

Maybe try some Kanamycin laced food? Super clean water and some kind of broad spectrum, gram + and - antibiotic should help keep any infection down.

That is exactly what I'm feeding her, it has garlic in it.

I never could have done it without reading of others doing it, successfully. I guess it is such a rare disease that not many have heard of it, so surgery is kind of a new thing. Here's a pic of her before the surgery, I'll take one of her tomorrow or so, I don't want to upset her any further right now. Even with the flash off a green light shines when I focus.

Oh man, I'm looking now, and I had left some of it behind, I had just cut across the middle to clear an opening. Now some of the puffy stuff left behind on both sides is kind of peeling, one tiny piece just fell away.

I hope no one is eating lunch. :crazy: I read some of the surgeries had resulted in something like that, with the immune system kicking in, and any remaining fibromas go away. 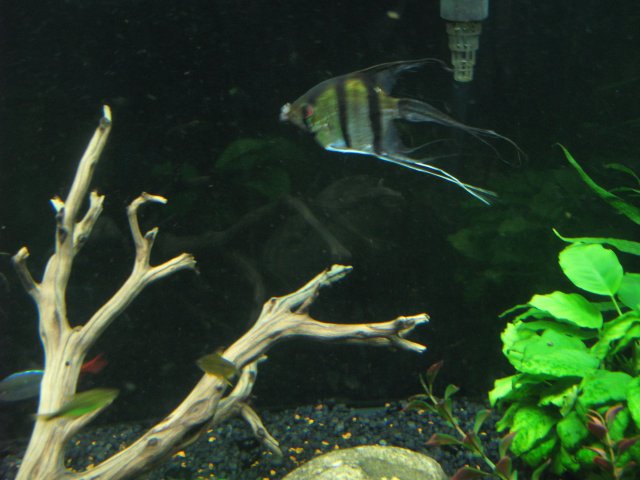