I have bba taking over my tank. I’ve been putting in liquid carbon for awhile to keep it in check but missed a few doses. I have no idea how to even go about trying co2. Any insight in what I could do to get rid of it?
29 gallon community tank that is at capacity. Fluval plant light 3.0 running at 8 hours timer on auto.
F

Well I also have a bba tank that I've been battling for quite a while. This is the worst I've ever had it. Here's what I've done:

The "gurus" say a 4 day TOTAL black out, no ambient light (tank wrapped in trash bags). I've tried that once & Excel...I've been bad at always dosing too. I've removed all I could manually. It never looks dying & reddish but it does come loose & clog my prefilters. That's fun to clean them all the time, snarl. I do know from other less infected tank old leaves tend to grow it. It thrives in both high & low flow. It can grow on tank sides, wood, substrate, filter intakes & returns, etc.
T

OK- I have just spent a bunch of time reading about 2/3 of really really long article (14 pages) on BBA in from the Barr Report from June 20, 2017. Most of the first 5 pages can be skipped except for the most hard core readers. The bottom of page 5 starts to discuss CO2, and this matters. later flow is covered as well.

Various treatment methods are covered as well as prevention in the future.

Basically your use of Excel is part of the problem. Not that you use it but that have done so inconsistently. Fluctuating levels of CO2 are one big cause of BBA outbreaks. Also faster flow can exacerbate things.

It is obvious as one reads what is important to know and what you can skip. Here is the link
The Freshwater Red algae: Rhodophyta - Volume 3, Issue 3
Expand signature
Vlad the Butcher.
Killer of women, children and old men.
N

So what I'm taking away from this is that I need good CO2 levels and better maintenance habits? My lights are on for only 8 hours and I already have nerites and amano shrimp in there. Pruning the infected leaves and removing affected décor as well? Guess I'll look into a CO2 system for that tank.

Thanks for the insight!
D

There are plenty of aquariums running without pressurized CO2 and without BBA. So I am going to say there's another issue.

I'm also going to say that Excel is a gluteraldehide derivative, and will eventually add carbon to an aquarium... it is not CO2, it is also debatable whether the carbon is usable by the plants at all... irrespective of what seachem's, API's marketing tell you (I don't think aquarium co-op count as they just put it into a bottle and sell)

Excel, or whatever, work in this case al an algaecide, plants grow better as a result of it killing the micro algaes on the plants, better letting them use the small amount of CO2 that gets naturally in the aquarium water (just like Oxygen is also)

In your situation, I would thoroughly clean the filter and gravel to reduce as much as possible any old, decaying organics. add some fast growing stem or floating plants in the water to take up extra nutrients, and remove the mostly affected leaves. if you want to add excel, feel free, I would use it in the middle of a water change, and spray the amount you plan to add to a fill aquarium mid water change over the most affected leaves directly then quickly fill the aquarium, you can also apply fresh peroxide directly to the submerged leaves via a pipette or whatever.

or google for the onw-two punch method to use excel and peroxide together.

A blackout will work also, but may not be necessary; but if you don't address the root of the problem it will just come back.
Expand signature
Randon Chat Quote
i do love to slurp it in unencumbered by object
Reactions: IceH2O
N

I’m using the easy products from aquarium co-op. Easy green, iron and carbon. I find it easier reading the dosage for each. I tried stem plants in there before and they kept dying. I have a hedge plant in there now as well as swords, Java fern, anubias and some Christmas moss.
D

I don't condone the use of any 'liquid carbon' products at all... not worth the risk for me,

I mention aquarium co-op as they don't really market, or develop the products as far as I know, just import from China and sell them.


Adding stem plants is so something will grow quickly and take up excess nutrients in your water.


Clean your gravel and filter, remove any badly affected leaves, revisit hos much you feed fish and plants.
Expand signature
Randon Chat Quote
i do love to slurp it in unencumbered by object
F

A combination of ....
- not overfeeding
- Aggressive mechanical removal (manual), including from the worse-affected leaves
- Spraying of affected hardware (rocks and wood included), and affected plants with peroxide
- and CONTINUED USE OF 3 METHODS ABOVE

....has allowed me to attain a near (not total but nearly so) elimination of absolutely awful BBAlgae growth in 4 of my planted tanks.

I will add that I tried blackouts and application of Excel, both by themselves and in combination of some of the above, with negligible (read, NOT effective) results.

The above is just my personal experience. In my opinion, the idea of the fluctuating CO2 as THE cause of BBA is flawed.
Good luck!!
T

As for Excel, I tend to trust Tom Barr on this as he actually has both the experience and the education. I have been adding Excel to planted tank now for close to 20 years. I have no problems using it and have seen no ill effects from using it. I will continue to use it.

But lets use a bit of common sense here. Excel has been around for along time and is used by many in the hobby. If it were harmful you would think there would be 1,000s or even 10,000s of reports of this. Where are these reports?

And then one needs actually to read what SeaChem says about Excel. Here are some key points they make in rebuttal to misinformation about Excel:

“Liquid carbon” or "liquid CO2" are misnomers that have been applied to Flourish Excel™ and similar products by our competitors and the general public to quickly summarize the purpose of the product. We don't use those terms in our packaging or marketing because they are inaccurate. Flourish Excel™, which is the product’s name, is an organic carbon source, that yes is in a liquid form. We in no way claim that is is a straight liquid form of elemental carbon (which does not exist) or CO2 (which only exists at high pressure or low temperature, such as in a CO2 canister).


Claim 3: Flourish Excel™ is actually gluteraldehyde! It is a dangerous carcinogen that is harmful to fish, plants, and humans!

This claim, that Flourish Excel™ is Gluteraldehyde, is a common one that is simply not true. I cannot speak for any other companies that may or may not use Gluteraldehyde, I can only speak for our company and our product. While structurally similar, Flourish Excel™ is NOT a gluteraldehyde product. Flourish Excel™ contains a molecule (2.0% polycycloglutaracetal) which contains a 5-carbon chain backbone. This molecule simulates the way a carbon would function in photosynthesis and helps to fill in the gap in a plant’s metabolic chain when there is not enough carbon present in the system (whether using a CO2 system or just from atmospheric exchange). Again, this isn’t to suggest that Flourish Excel™ replaces a CO2 system or atmospheric exchange or will interfere with either of those methods. It’s is simply an addition to the Carbon supplied by those methods, should extra be required.

Here is the SDS sheet for Flourish Excel™. Polycycloglutaracetal is not a carcinogen.
https://www.dropbox.com/sh/iu6wapsz...l=0&preview=Flourish+Excel+SDS+20160107+1.pdf


Claim 4: Flourish Excel™ is actually just an algaecide and does not actually help the plants grow!

Flourish Excel™ is not an algicide, we do not recommend it as an algaecide, and make no claim for it being an algaecide - because it’s not. Carbon is a fundamental limiting factor in an aquarium environment, where carbon is only available through gas exchange at the surface, unless you use some other means of carbon introduction. In these such systems, carbon is often the number 1 limiting factor surpassing plant growth. Because of this deficiency, the metabolism and photosynthesis of the plant suffers, causing a back up of other nutrients. Algae, are very good at taking advantage of this and blooming when there is a deficiency of some major nutrient (such as carbon). So, when you add a supplement of carbon, whether this be Flourish Excel™ or a CO2 system, you fill that metabolic gap, the plants can function and process nutrients again, and algae tends to die out because the plants are now functioning properly.
Click to expand...

The one thing that all responsible sites say about using Excel is to do so following the SeaChem directions. They all say do not overdose.

Finally, I was only able to find one study which was about glutaraldehyde. It did mention Excel and Polycycloglutaracetal. But one thing it did say about glut. was that in an aerobic environment it had a half-life of about 10.6 hours. It also explained the process of how glutaraldehyde provided carbon. " Under aerobic conditions, glutaraldehyde was first biotransformed into the intermediate glutaric acid, which then underwent further metabolism ultimately to carbon dioxide." I could only read the Abstract from the 2001 paper as I won't pay to do so and I am not affiliated with an institution which would get me free access.

I came home from work and went to work on the tank. Here is the before picture. 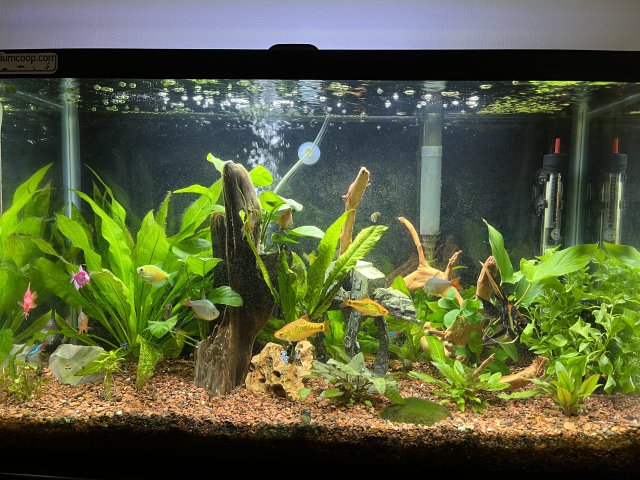 I pulled out two Amazon swords that were lacking growth and were vanishing and covered with algae. Trimmed the big sword in the left corner as well as the crypts. Vacuumed the substrate and pulled 10 gal of filth from it. 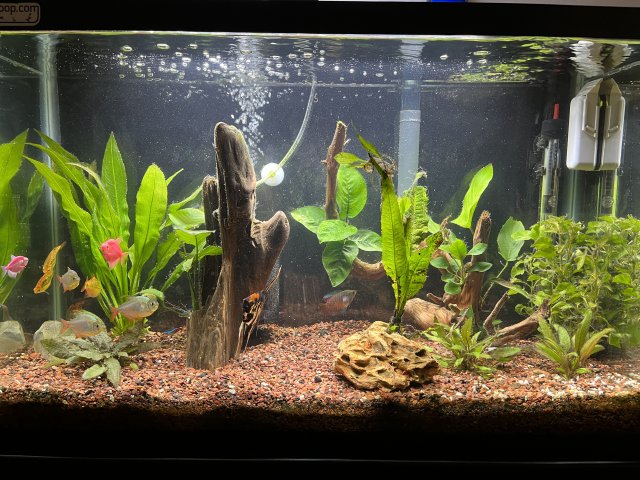