Hello everyone.
I have x2 clown loaches in an established (6yr) 120L tank.
Weekly water changes alternating 25% and 50% every fortnight - never any problems with nitrogen cycle.
All water changes treated with Tetra AquaSafe, Tetra Easy Balance, and API Aquarium Salt.
But the larger Loach has developed a flaky appearance at the base of its dorsal fin and has stopped using the fin.
No obvious signs of parasites, ICK, etc.
Any help diagnosing and guidance on treatment.
Photo enclosed. 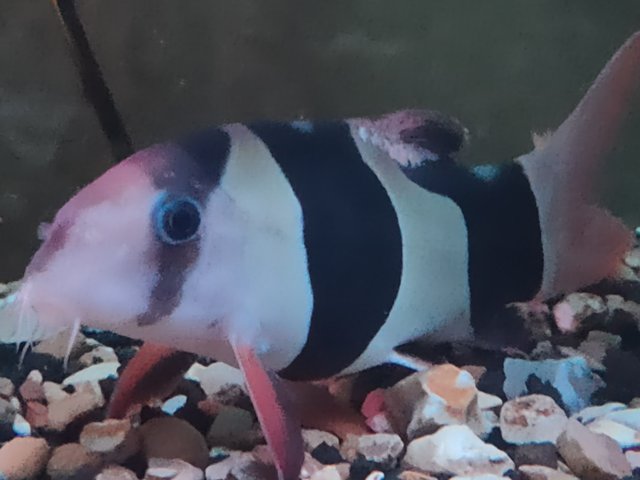 Oh dear, that dorsal fin doesn''t look good. What other fish do you have with it? That's a pretty small tank...even for just 2 clowns. Any decor he could have been injured on?

I'm not a fan of aqurium salt but it didn't do that to your loach.

I'm not sure what to suggest. It looks like the injury/disease goes into its body not just the fin. That's more serious. How long has this be going on?

Lets think about it & see if anyone else has ideas
T

Thanks for the welcome and the response.
Yes, I'm tempted to suggest it's an injury of some kind.
I first noticed it a while ago.
Yes, she (I'm convinced it's a she) could have injured herself on an aquarium ornament.
But both she and the other Loach both appear happy - she's still dancing around the tank, eating well, energetic, and so on.
I don't detect any changes in behaviour which indicate she is at all impaired.
They're both always joined at the hip.

That said, - I did notice her Loach mate nipping at her fins a while ago.
I've never seen that before, so it did take me by surprise - a rare instance of atypical behaviour between the two.
I've never seen it again.

As for other tankmates - they share the tank with a handful of Harlequins.

It's hard to tell from your pic...Is the light colored area in the body raised or look more like a surface scrape? Is it getting larger? Change water more often, clean water can help wounds heal faster. Skip the salt. I suggest twice/week to see if that helps.

If the spot is getting bigger, I would start an antibiotic. I'm guessing you don't live in the US, you may have limited choices.

Look hard at your decor, feel to see if there is a rough edge. They do like to cram into small places, might be time for some new hiding places. I would go with at least 3 "caves".

Loaches like several friends not just to play with but to displace any aggression, like food fights or claiming the "best" cave.

You do know they need a bigger tank...
T

Thank you.
It appears more like a surface scrape, and it doesn't look raised.
Yes, I will reduce the amount I use the salt.
I have bought some Esha 2000 as recommended on another forum, so will treat with that - just in case it's fungal or bacterial in nature.

It is almost impossible to tell from your picture what this is. I have had my biggest clown since 2002. I have an assorted group of 10 with most being under 4 inches. These fish really really need to be in groups.

I have never added salt to their water as they are a soft water fish which, when in the wild, lives in a neutral to slightly acid pH. These are the parameters of my well water. Aquarium salt is the same thing as the salt you put on your food. I would only add salt to my clown tank to cure something and even then I would be hesitant.

It is easy to jump to the wrong conclusion here because of the picture quality. However, you are there in person. I suggest you research columnaris. One of the symptoms of this is called saddleback disease because it often appear at the base of the dorsal. I am not in any way suggesting this is the diagnosis. However, given the location of the problem this is not a bad thing to investigate either to confirm or to eliminate.

Columnaris comes in a variety of strains and some are quite deadly and is also contagious. It is more often called mouth fungus because it can affect that area of a fish and resembles a fungal infection. However, columnaris is bacteria and anti-fungals won't help. Since salt is often used for fungus on fw fish and you have salt in the water, that might suggest this is not a fungal problem.

Next, the size of the tank is likely complicit in the problem. My clowns are now in a 150 gal. (567l) and I think it is getting too small. I do have a herd of redline barbs with them. I would suggest your tank needs to have almost daily water changes for the fish. But I cannot tell you in good conscience they should remain in such a small tank.

Finally, though I have never joined the site, I have visited often over the years. It is an site dedicated to loaches. You may want to investigate. If I remember right, there are a number of folks from the UK there. https://www.loaches.com/
Expand signature
'Everyone is entitled to his own opinion, but not to his own facts." Daniel Patrick Moynihan
"The good thing about science is that it’s true whether or not you believe in it." Neil DeGrasse Tyson
"How do you make a cycle go faster? Pedal harder." A. Nonny Mouze
F

Well, loaches.com is almost dead these days (sniff) but Redshark is in the UK & he still visits the site, sometimes anyway. He has some 25? year old clowns. If you're on facebook, there's loachfanatics. Some of the folks are from old LOL.com, many in the UK. You have to wait to be approved.

I did a quick search columnaris + clown loaches but the pics are just loaches with diseases in general. It often looks white, yours looks more pinkish...again, it could be the pic.