I don't know if anyone is interested but I have found some really cool stuff with this research so far.

The results haven't been published yet but we are confident that after adding in another family or two we will have a really good publishable paper. Currently, we could publish it now, but we'd like to get some of my stats that are borderline over the line and into significant which would really increase the amount I can conclude from my research.
The project I am working on at the moment is looking at maternal effects on shoal cohesion of juveniles and while I haven't waded through the massive data sheets my video analysis has generated, observations are suggesting that those raised in the artificial environment startle easier in a group, don't stick together as much and don't have a defined leader when they do shoal. Its been really interesting! Of course, obligatory pics of my gorgeous males. 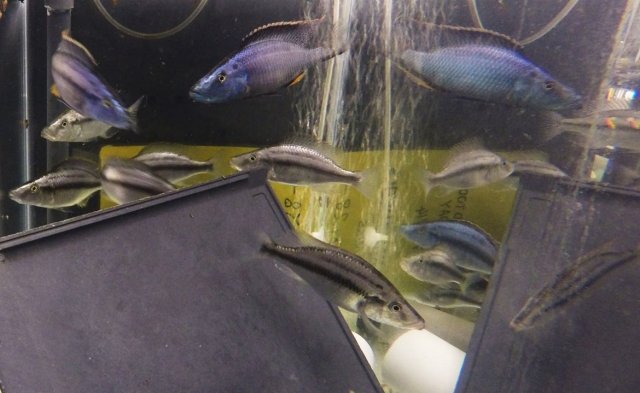 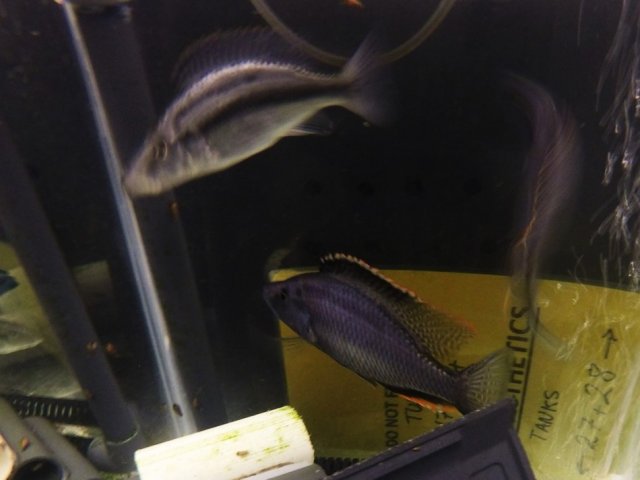 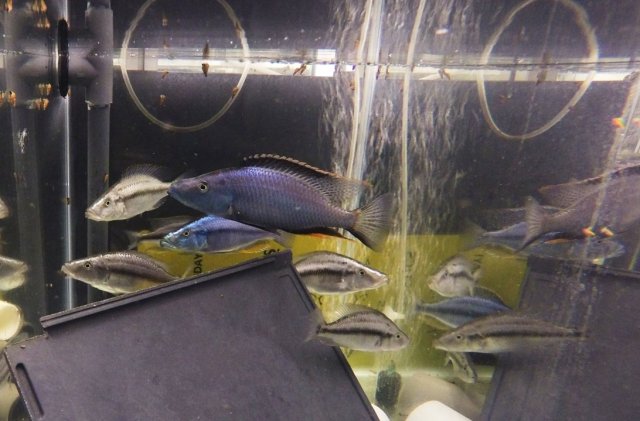 NP! I plan on just continuing to update this as I get info from my research. I find it fascinating.
Expand signature
"Boldness is always rewarded"

Another interesting thing that happened is in two of the three families there were some jaw deformities. This deformity, bottom picture, only occurred in eggs that were removed from the female. The question raised by this is whether or not there is something in the environment of the buccal cavity that does not allow juveniles like this to hatch, or if there was something external in the flask (though each were raised in a new clean flask and at separate times) that caused the deformity? Another option is does the female somehow selectively remove these individuals from the clutch before I am able to see them? Or lastly, was it just random luck of the draw. Its impossible to tell at this point. However, one female from study one was used to produce fry for study two and though she produced fry with this deformity the first go round, none were present in the second.
The deformity present does not allow juveniles to properly consume food and all of them perished within four days of absorbing the yolk. Fish pictured are of the removed group at 20 days post hatching when the yolk was nearly fully absorbed. 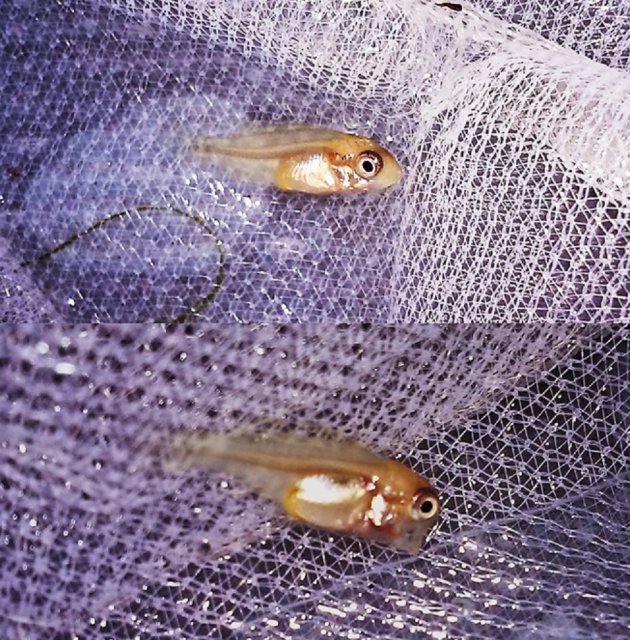 There is a third possible explanation, that the potentially deformed fry do hatch and that the physical parameters in the mouth prevent it from developing to such extreme. In other words they might get massaged into normalcy.

I suppose if you remove some in the future and some of them develop deformities, one method to test that the mouth conditions normalize fry could be found by finding a way to count the eggs that remain in the mouth before they hatch. Then compare that number with the number of released fry and whether they are all normal.

1. So if some removed fry are deformed and the number of eggs in the mouth and normal fry are equal, then the mouth normalizes potentially deformed fry or there is something damaging the removed fry/eggs.

2. If the number of eggs in the mouth is more than the number of normal fry released then the deformed fry are culled somehow by the mother.

This could possibly give you the answer on whether the cause of the deformities is nature or nurture.
Last edited: Jul 21, 2015
Expand signature

That is one way we were thinking about looking at it. The problem is figuring out how to determine that. With my current stock of females being wild caught they tend to stress and purge eggs much easier than tank raised individuals would. I had one female that simply removing her to the smaller tank caused her to cough up all of her eggs, it was very depressing. So, I do know that too much inspection of the fish would be an issue.

This particular deformity is potentially caused by an excess hormone that causes a change in the regulation of a specific enzyme, I can't remember which one, during skull formation. My supervisor purposefully bred some like this, of a different species, a few years ago to use as an extreme in the measurement of skull slopes based on the levels of that hormone.

It is something that we plan to find a way to investigate if I manage to get this PhD spot.
Expand signature
"Boldness is always rewarded"

Not like you can walk up and tell them, "Say Ahhh". Surely a puzzle anyway.
Expand signature

Getting some interesting results on shoaling cohesion in a novel envinronemnt so far! Should be some great results!
Expand signature
"Boldness is always rewarded"

Great series of posts. It's clear you are an awesome enthusiast! Mouthbrooders are my favorite fish, haha. I used to watch my Afro cichlids brood around all the time.
Expand signature

Sigrid;2567691 said:
The local mini-pet store folks would not know a dandelion from a marijuana plant, oooops "noxious weed", and that is the sad truth.
Click to expand...

rufioman said:
Great series of posts. It's clear you are an awesome enthusiast! Mouthbrooders are my favorite fish, haha. I used to watch my Afro cichlids brood around all the time.
Click to expand...

Thanks! I really do love this topic and posting here is great way for me to simultaneously procrastinate and get a better understanding of what I am trying to work on while not feeling too guilty lol. Mouthbrooders really are fantastic and I am so happy that I got to work with them!
Expand signature
"Boldness is always rewarded"