Help me set up a planted tank?

Hi! I have a 30g bowfront tank that I'd like to switch from fake to live plants. It's a huge battle with my parents to get live stuff in the first place because apparently growing something alive that doesn't actively swim around is tOo eXpEnSiVe and tHe FiSh ArE FiNe WiTh fAkE pLaNtS, but I'm slowly getting there through some propagation of the plants I already have in my other two 5g tanks (java fern, water wisteria, amazon sword, marimo moss balls, anacharis). I have a clump of anacharis growing behind the big fake plant, as well as a few baby java ferns in the front—those are just planted there to grow aimlessly, as I don't really know where they should go, honestly.

Unfortunately I have to go with inert gravel, meaning I only want plants that grow nicely in said gravel. I can buy root tabs and ferts, though! So, with all that in mind, as well as the current layout of the tank attached below, I'd like a few opinions. What plants should go where to mimic my current fake plants? How should I change my aquascape to make things look nicer and more natural? Do any of you have any recommendations on good, hopefully not-too-expensive driftwood and stone to replace the fake tree thing? Thanks in advance for any help I receive! The tank is currently stocked with six neon tetras, two female cherry barbs, a bristlenose pleco, a dwarf gourami, five or so ghost shrimp, and a crap ton of my arch nemesis, the stupid pond snails. The stocking is definitely subject to change in the future. One thing to note is that I want to replace the gourami with a betta whenever the time comes when he's old enough to pass... And the barbs will not be in the tank with said betta. I'll probably add in more neon tetras to replace them, since I love watching them shoal. Thoughts? 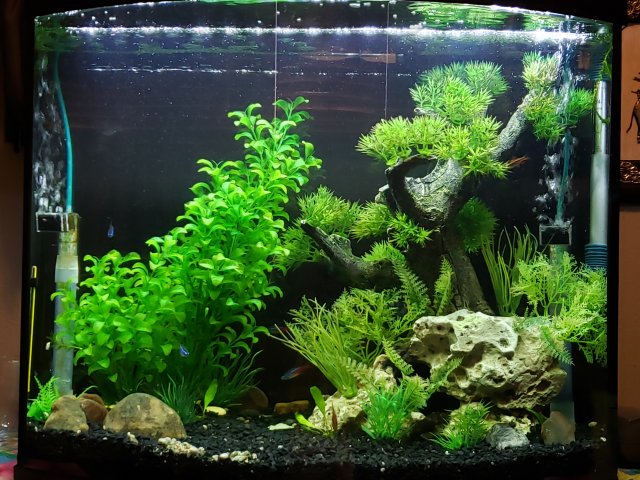 I actually like your fake plant set up! But, yeah, real plants are better...much better.

Wisteria is a stem plant, pretty easy planted in the substrate. So is anacharis but is more a cool/cold water plant...I never have good luck with it.

I bet your plastic "wood" plants can be removed & replaced with Java fern &/or anubias. The plastic plants are usually just plugged into holes in the plastic wood, easy to remove.

Some stem plants are more difficult to replace with real, that dense "hedge plant" on the left is where I'd stick in a wisteria.

You don't have to replant it all at 1 time, maybe 1 new plant a month or 2. My tanks are in for the long haul (years!)...you should aim for that too. That "may be" more understandable to your parents & you already have a few of those plants now.

This is all very helpful, thank you! And I like the fake setup too, but I definitely love live plants more. Eventually I hope to begin solely with live plants in every tank—that is, when I don't have judgemental housemates breathing down my neck.

I didn't actually know that anacharis was cold water; they seem to be doing alright for now, and are shooting off a few roots. One of the shorter stems did die but the rest seem okay; I hope they'll stick around.

Ii didn't think of adapting the wood! That would give me a good place to put all the baby java ferns.

I was actually thinking of putting a wisteria for the hedge, but do they grow that large? I've never seen wisteria before, but like the anacharis, the plant I have seems to be throwing out a lot of roots. I'm interested in how it'll look months from now, maybe I'll Google it.

As for the small plants, I'll have to buy a few new ones. But hopefully with all the propagation I'm doing, my family won't be too mad about that... Maybe I'll do those last.

It will definitely be a long process, but I'm willing to stick it out. Anything for the fish, right?
F

Java fern is perfect for you fake wood! & you already have baby plants!! Start there!. Baby steps but steps forward...No hurry...your tank is a long term project...find plants that work for you & your tank, lighting etc.
Reactions: greahound
T

What is wrong with your parents? Are they open for facts and logic? It's easier and better to keep fish in a planted tank... Plenty of aquatic plants are easier to keep as fish. Yes there are enough that are difficult to grow with a need for lots of light, CO2 and nutrients but you don't need or even want these... your tank will look just as great.
Also if you go to an aquarium club or live in a big city they aren't expensive, other hobbyists will give cuttings for free or sell you plants for like $1 or $2 per piece. Look out for these...

Thank you for the plant tips! And it's because they think I'll somehow kill the plants. But I'm not stupid, I'm getting low light and not super picky plants for a reason I really care about my fish. Unfortunately I live in a small town (nearest lfs is over 40 mins away) and not many fish people are around here... But I do get cuttings from my old aquatic science teacher! He's the one who got me into the hobby

Okay, so I've planted a cutting of my water wisteria, and it looks great. When it gets big enough, I will remove the large "hedge" plant. As for the java fern... I tried to stick them in the holes, but they have a lot of roots and the holes are relatively small. What should I do to get them in there and make them stay? I have a good amount of flow throughout the aquarium, so they just end up dislodging.
D

Glue or tie them down.

If you use glue, use superglue, use the gel kind if you need to put it straight back down into the water.

If using gel it will dry white, so while wet grumble some aquatic soil, substrate or sand into it to make it blend in.
Randon Chat Quote
i do love to slurp it in unencumbered by object

Sounds good; what do i do about the roots? just let them hang out over the fake wood?
D

glue them down too, or cut them off, or ignore them..

they should attach to the fake wood, with maybe a few exceptions. honestly I am normally one to use real wood so it'll always attach
Randon Chat Quote
i do love to slurp it in unencumbered by object
Reactions: greahound
You must log in or register to reply here.
Share:
Facebook Twitter Reddit Pinterest Tumblr WhatsApp Email Link
Top Bottom