Is this fin rot?

Any thoughts on what is happening here? Is this bacterial fin rot? Is there anything additional I should be doing? We were gone for a 2.5 week vacation and before we left we only saw a little bump on the tail and the fin was completely fine at that time.

A few weeks prior to our vacation, the tank was treated for what I suspect was a fungal disease that killed two of our three goldfish. Those fish went to a hospital tank when they showed signs of problems (about a week apart). At that time I didn’t have any medicine so I did a few PWCs along with prescribed amounts of API aquarium salt and API Stress Coat+. It came too late for two of our three fish but I eventually treated the main tank with API pimafix for 7 days (carbon removed from filter). I later did two PWCs. Besides for the previously mentioned bump, this remaining goldfish seemed to have made a full recovery. He went from labored breathing, clinched fins and no interest in food to his normal energetic and eager to eat self and has been that way ever since, even now with the fin rot.

I did not have test kits until after I returned from vacation. I did PWCs immediately because it was obvious that the vacation feeder overfed him so I assumed at that time the ammonia levels were high and were the cause for the fin rot. Now after six days and two PWCs, the ammonia registers 0ppm and pH is at least 7.6. I am using API kits (not strips) and the highest the color card goes for pH is 7.6. Our tap/well water is also at the same level and I don’t PH Down (yet).

We have 10 gallon tank that has been setup for three years. It was the same three fish all that time. There are no plants. The filter is aquaclear 20. I have no idea how the original fungus showed up. The tank is covered and the temperature is 64f like our house. We’ve kept the tank clean and introduced nothing new to it. Even the food remained the same. 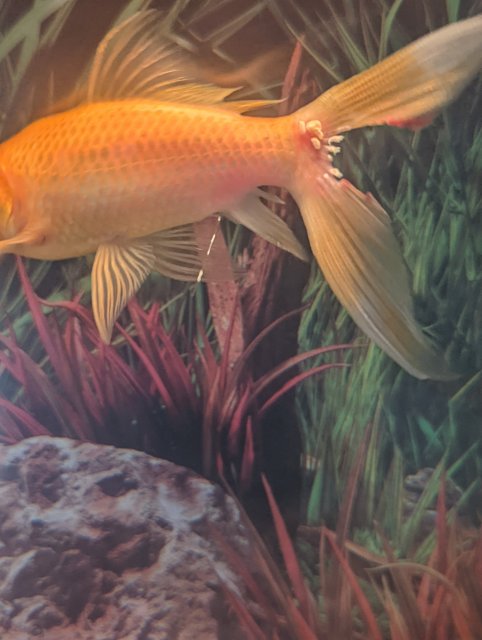 Maybe lymphocistus? It doesn't look good, whatever it is. I'm sorry I don't know what to suggest for treatment. I have almost no experience with goldies & what can happen with them. I hope someone can help you. You have my sympathy & good wishes.
Reactions: B34N3R
B

Thank you F fishorama for the reply.

It has been 9 days. The fin has grown back and the white spots are almost gone. Now the fish is starting to turn black. My guess (Googling) is that he had ammonia burn and is healing. My understanding is that this is a good sign.

The goldfish seems to be in good spirits and so is my 10-year old daughter. 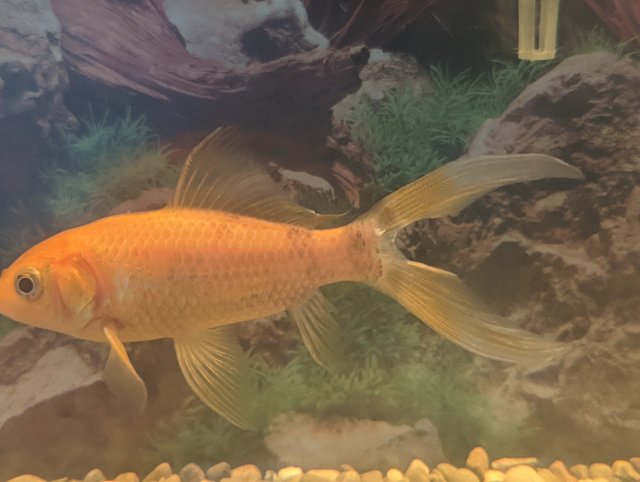 Wow, that looks much better! I still don't know what it is/was but better. Good luck!
B

He turned black on about 1/2 of his body. It started to dissipate after a few days and now seems to be in perfect health. The fin has fully grown back and there are not white bumps either.
Reactions: dudley
You must log in or register to reply here.
Share:
Facebook Twitter Reddit Pinterest Tumblr WhatsApp Email Link
Top Bottom