Not new to tank care, however, new(ish) to Jack Dempseys.

6 months ago... Bought two 1in Jacks and a Giraffe put them all in a starter 30 gallon. Giraffe started picking on the Jacks, tank was overwhelmed with red/brown algae. Removed the aggressor, re-did the tank, 50% water change (still got some algae), now Jacks and tank are acting funny.

Locked lips for the first 6 hrs. I added another hide. They havent done it since (1 week ago). However, now one seems to be yawning, they seem like buddies, one is moving rocks, and I cant get rid of the algae. Sometimes they rub their heads against stuff pretty viciously? Kinda strange.

There is also double the bubbles from the filter on the surface. Not as worried about that.

I do need another heater, its currently at 74 i think, and I know they like it warmer but I want to make sure they arent sick. I feed them cichlid sticks twice a day and they only eat maybe 2 sticks each. I feel they should eat more than that. I think I might have two females but they arent quite big enough for me to tell. About 3 inches. See picture. Any advice would help. Please dont judge me, I am new with Jacks. I have had other tanks before and never had aggressive breeds or algae problems. So im at a loss at what to do. 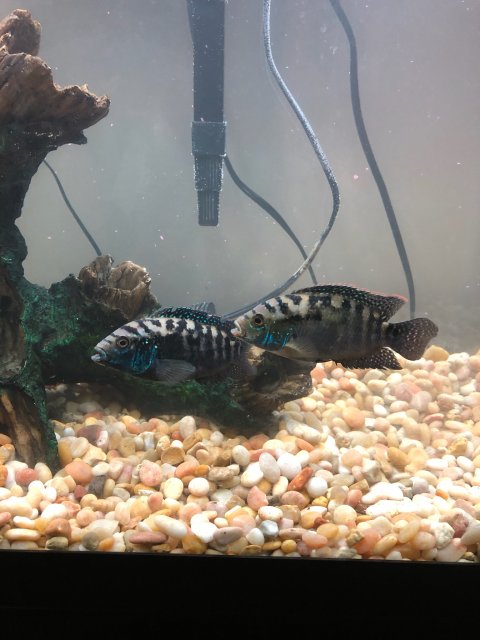