Recently I've been trying to re-vamp my brackish tank (20g) after it's went though a kind of "downfall" (long story) and one thing I want to do is grow a java moss carpet for it. I've tried leaving the java in the tank as it is but what i realized is that sometimes the water somewhat evaporates and the remainder gets too salty, and in addition the water's too cold for it to grow, at about 68-69 degrees. Fortunately, the moss hasn't shown any signs of total dying in all this prolonged suffering, however it's grown less, and gotten darker and thinner, so I have plans to make it grow more. Now, not only will I pay more attention to the tank with water changes and a heater, but also I'm trying to grow the java moss in a much warmer tank (10g in a separate room) with better lighting (I give the tank 4-10 hours of 14 watt, 5.0 UVB lighting usually) and better heating at, as of now 84 degrees. (i have heaters out in the garage somewhere but have yet to find them so I'm using a heater a foot or so from the tank to heat it up) I couldn't find egg crates at home depot so I used some fiber glass mesh for the moss to root onto, and before setting up the tank, I tore the moss into finer pieces and distributed it as evenly as possible on the mesh.
​ 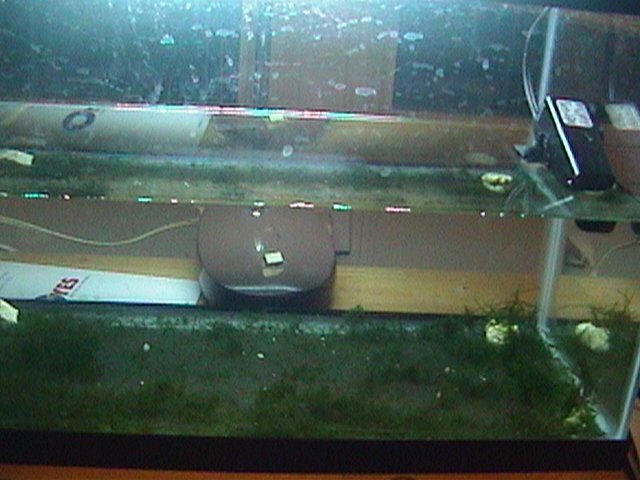 after i added the filter (i heard moss needs a good current to keep growing too) however some of the larger pieces of moss moved back together but what's good is that it's somewhat even and not all clumpy. here's a pic of some of the larger shreds possibly photosynthesizing as well.​ 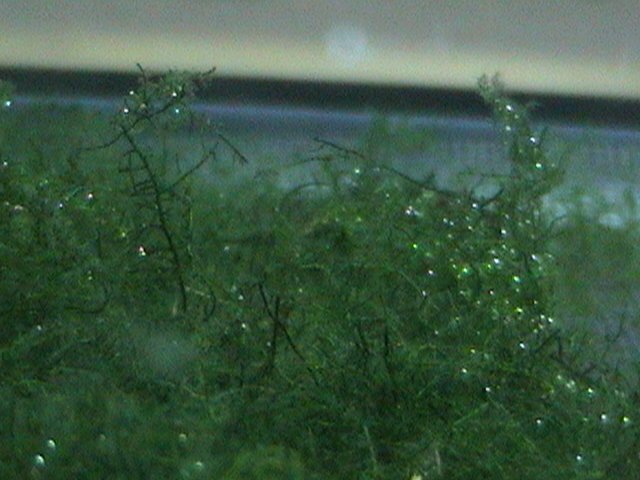 As for the really small shreds, they're under the grid and possibly photosynthesizing too, but i'm not sure how fast they'll grow, nor whether extra fertilizer, co2 or light will help them either. here's a pic of them, where they're not photosynthesizing.​ 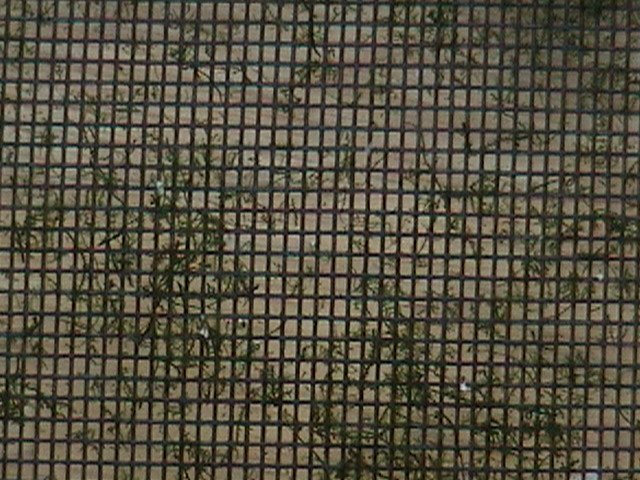 and a pic zoomed a bit further out of this part of the tank.​ 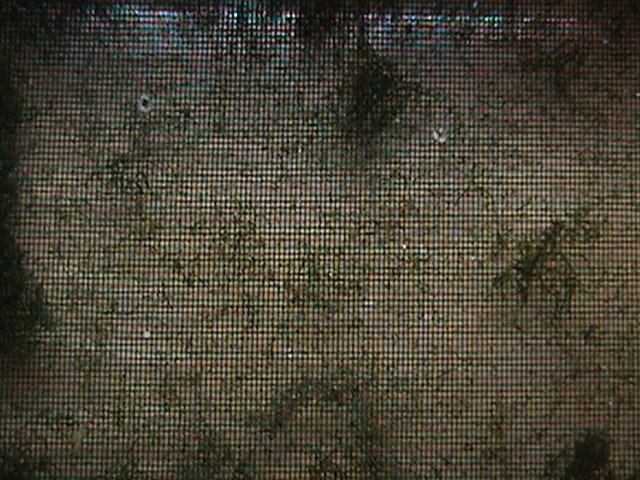 and just another last pic of the whole tank.​ 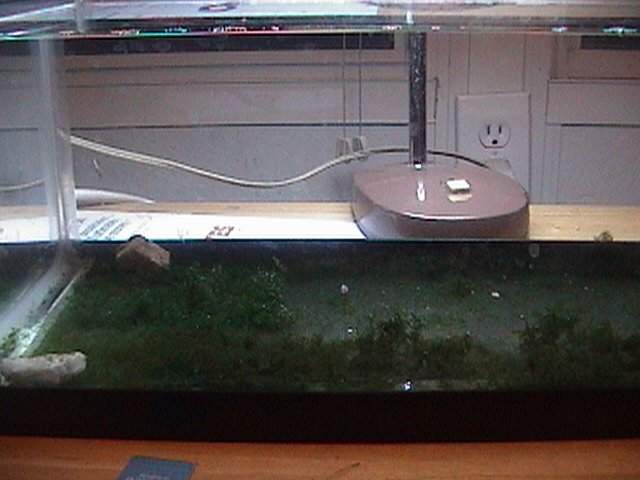 If this can start growing very well eventually, I'll re-introduce it into the tank by taking small, several inch squares of the moss from here and planting it back into the tank, giving the smaller and less grown patches more of a chance to grow. I'm still not sure if this will work out to grow a legit carpet of moss so I'm asking for the advice of you aquascapers out there. Thank you very much.
​

What kind of lighting you have over it? Whats the salinity of the water? From my understand much past 1.010 it grows pretty poorly. I've only kept in FW, even low temps its grown ok.

The lighting is fluorescent and there's no salt in the tank with the java moss. In the main tank I try to keep it at a SG of 1.005
woah.

Yep, pretty sure they're photosynthesizing lol. Should i start taking the bigger sheets of moss and placing them back in the main tank by now? (When I add the heater etc to the tank first of course) 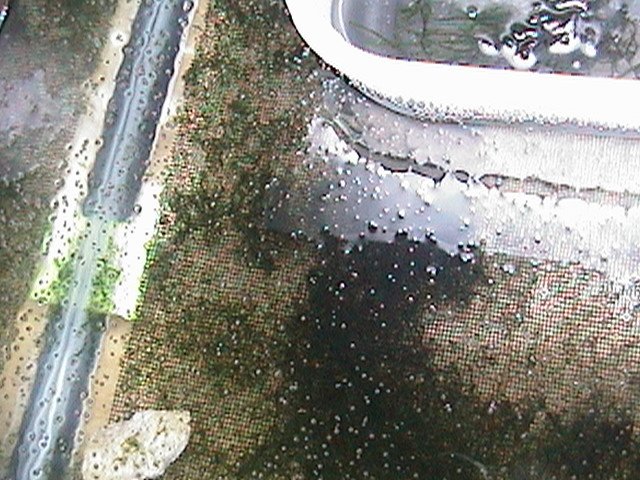 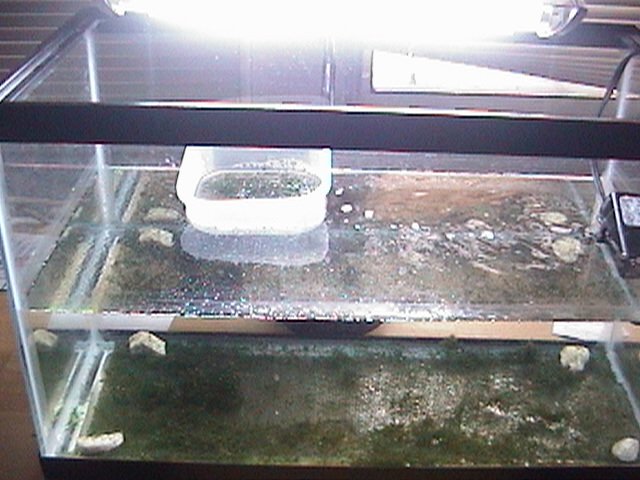 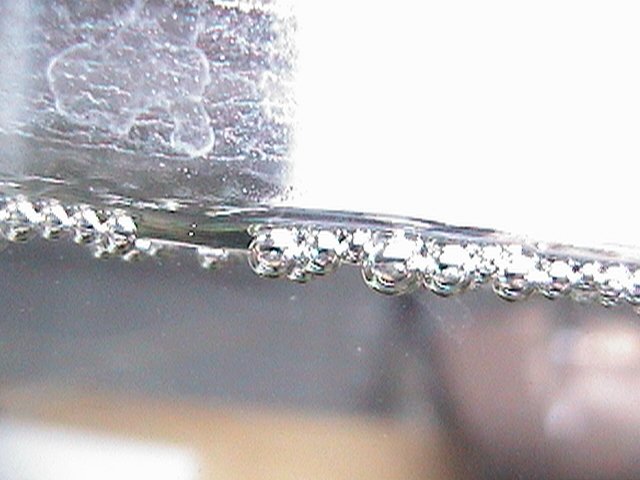 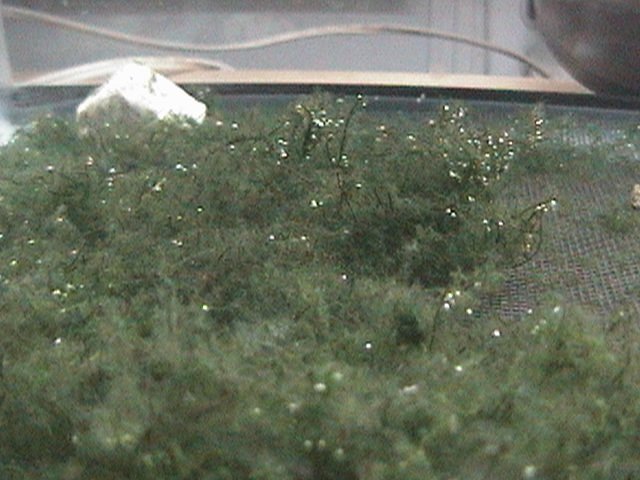 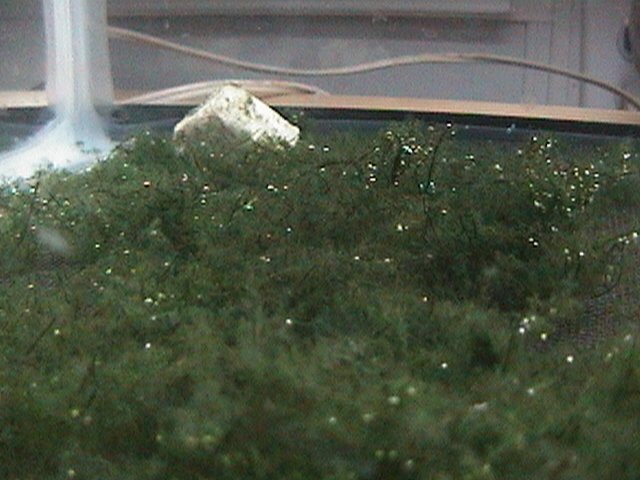 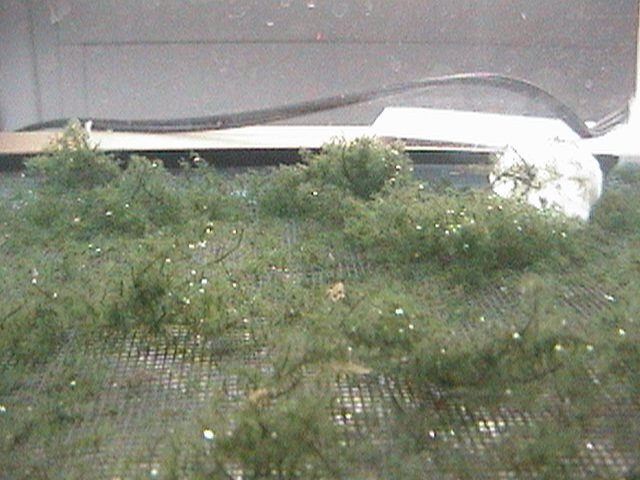 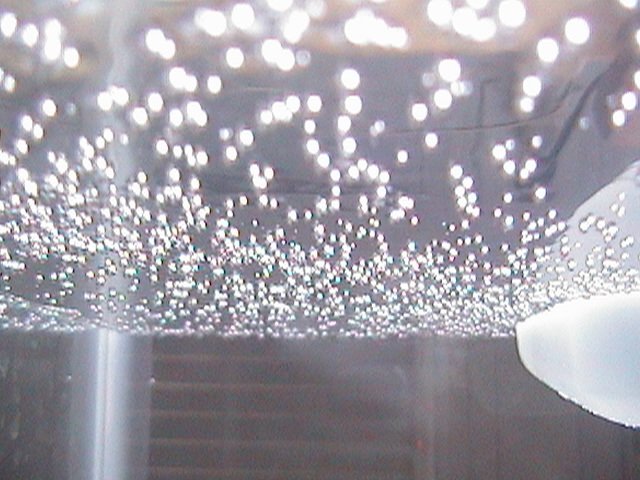 I have made a java moss carpet and it does work the problem for me was that the moss will start to detach from the bottom over time as it grows more and more. I have also tried a moss wall and a similar thing happens. I have had much better success with flame moss (which is very similar but it grows faster and holds on to what ever I attach it to better).

My issues with the java moss carpet detaching could in part be due to the Cory's and guppies who often swim into the dense part at the bottom and help detach it.

Here are some pictures of my tank after the moss has detached, also the Cory that is mostly responsible for detaching a lot of it.

Here is my advice for this experiment:

1. Cory's and bottom dwellers will swim through it and will over time cause it to detach. ( any fish that really picks at plants will also rip it up)

2. Weak current also helps it stay attached to the bottom

3. Putting a piece of wood or branch to help way moss down and also give the moss more to attach too once it gets more overgrown.

4. Maybe putting a rock or what ever you can to help keep it anchored

5. And finally I would recommend trying different mosses because java moss doesn't like to attach very well. 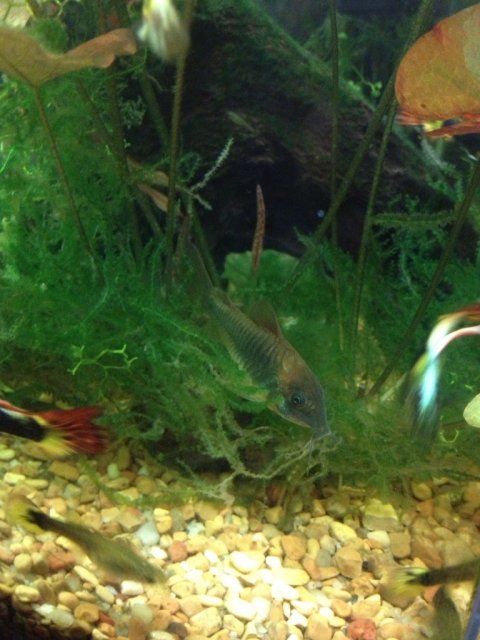 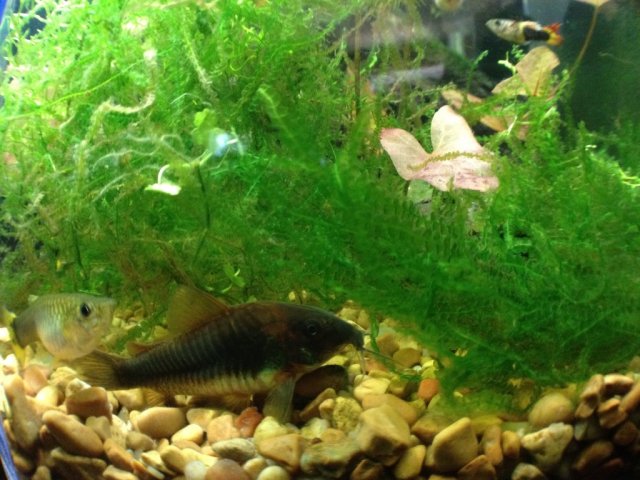 Nice, but the thing is, I'm using java moss because it's for my southeast asian biotope tank. All the life in the tank I want to be native to SE Asia's estuaries. I've had the moss drift off from the grid to, but eventually i'll put said moss in the tank and careful plant it. Last year I did that by attaching a couple fronds underwater evenly but all I also need to do is keep the tank heated.
woah.

It's been more than a month since I've started this IIRC and so far, regardless of extreme evaporation, low temps, etc, the moss has been growing great. For a bit of fertilizer I dropped in one of my mudpuppy's droppings (no pun intended) and it's been growing profusely. From the little leaflets I tore off in december have sprouted branches and even on the rocks i used to weigh the grid down it's been growing. I've transfered the larger, older clumps back into the brackish tank and they've kinda been weighted down with bacteria rings and me pushing the moss into the gravel (i wonder does that hurt the moss?) so here are some pics I took this morning, taken with my new gopro. 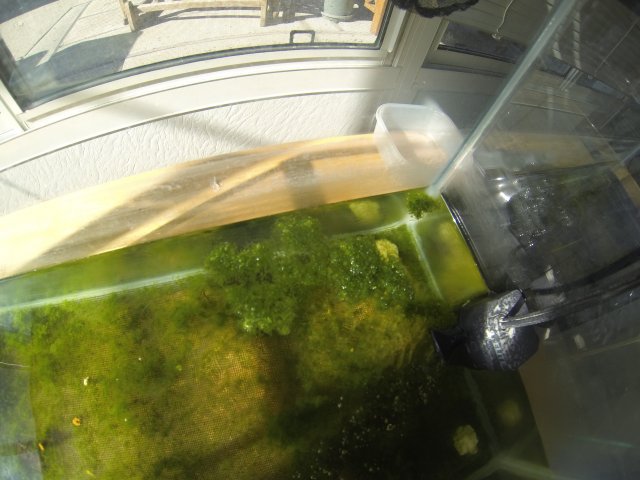 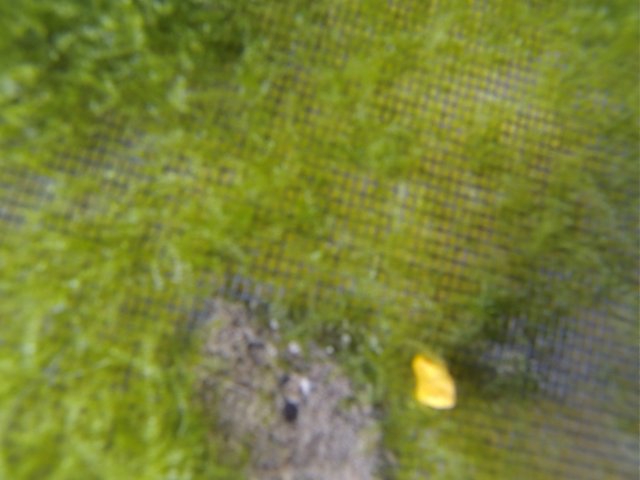 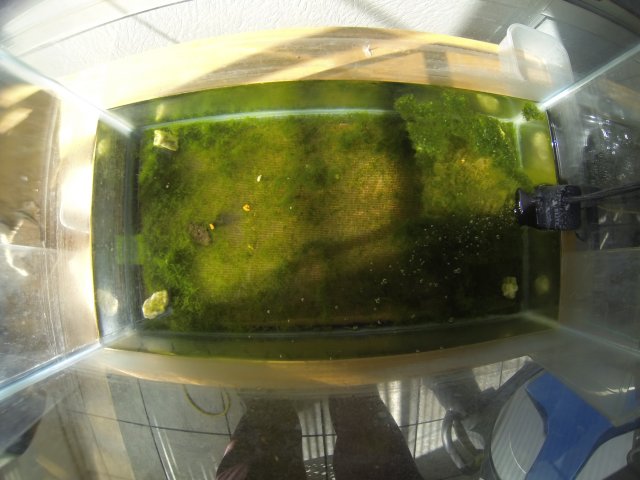 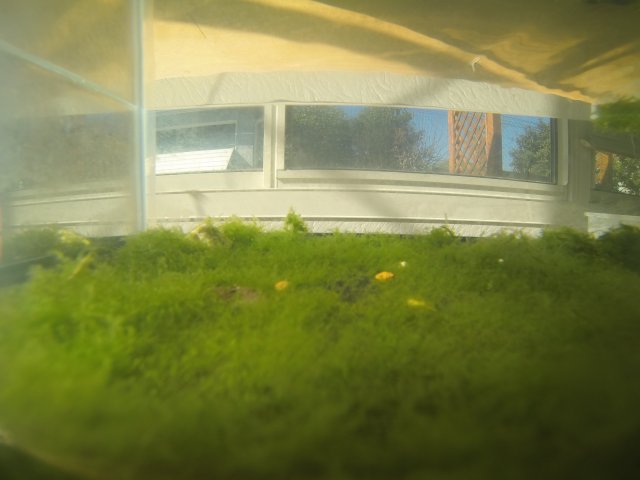 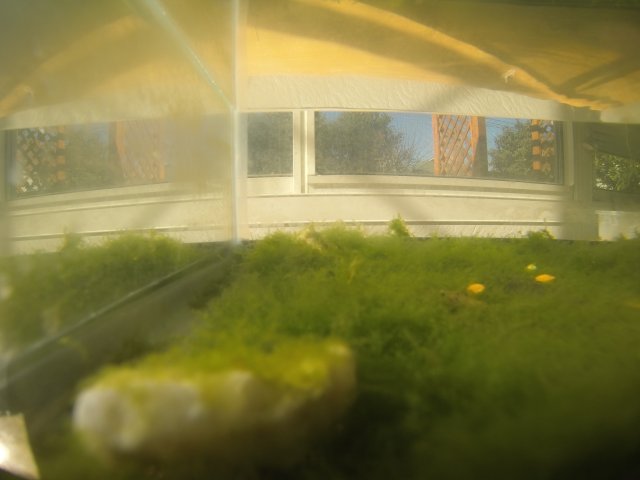 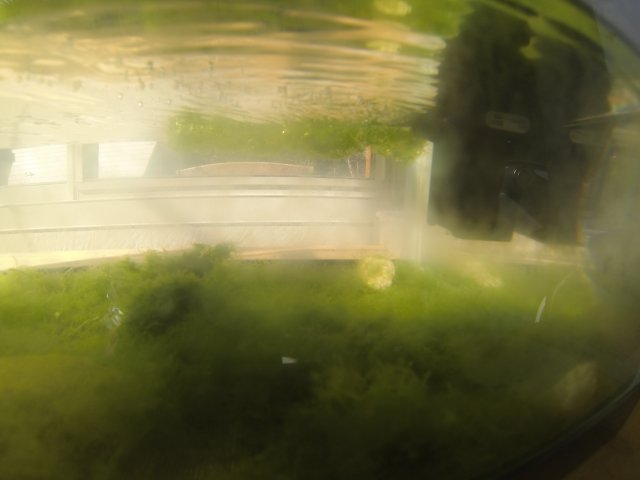