this is my 450 gallon tank. it lasted about 8 months due to a bad seam. the manufacturer was not good at what he did. was nice while it lasted. right before the break, it was flourishing with 5 pairs of different colored sailfin mollies, tons more plants, catfish and siamese algae eaters along with what you see in the pics. didnt take pictures of it in the last 4 months until after the break.


this is the start when i first filled the tank. had 2 pieces of driftwood i found at my lake and bleached. i had 3 large sailfin plecos, some silver dollars, a small albino tiger oscar, and tinfoil barbs. 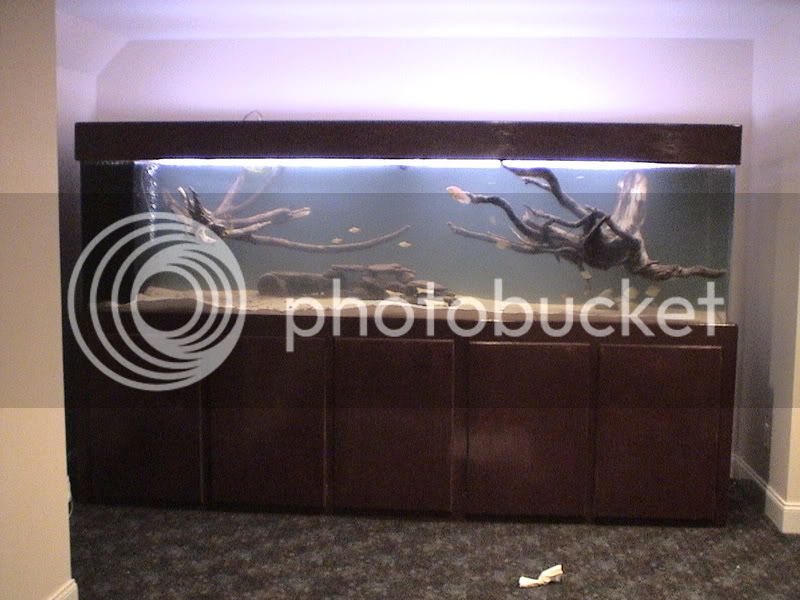 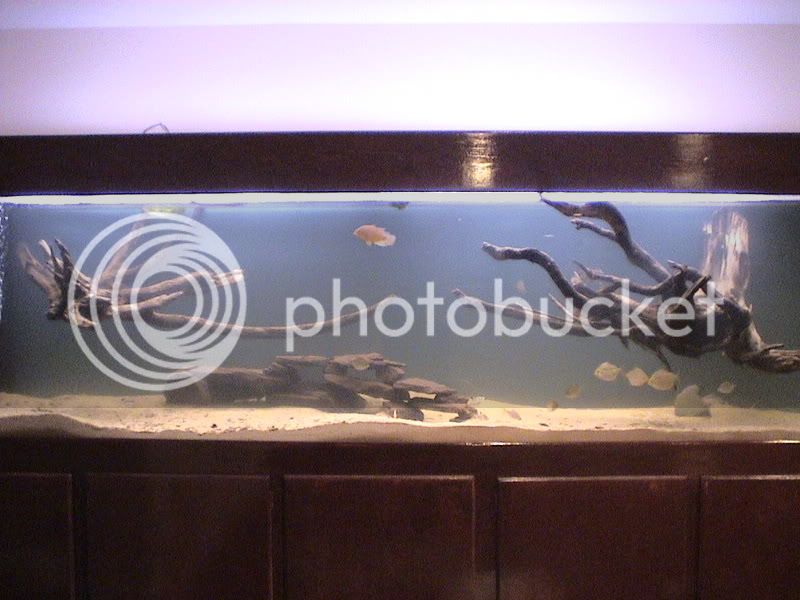 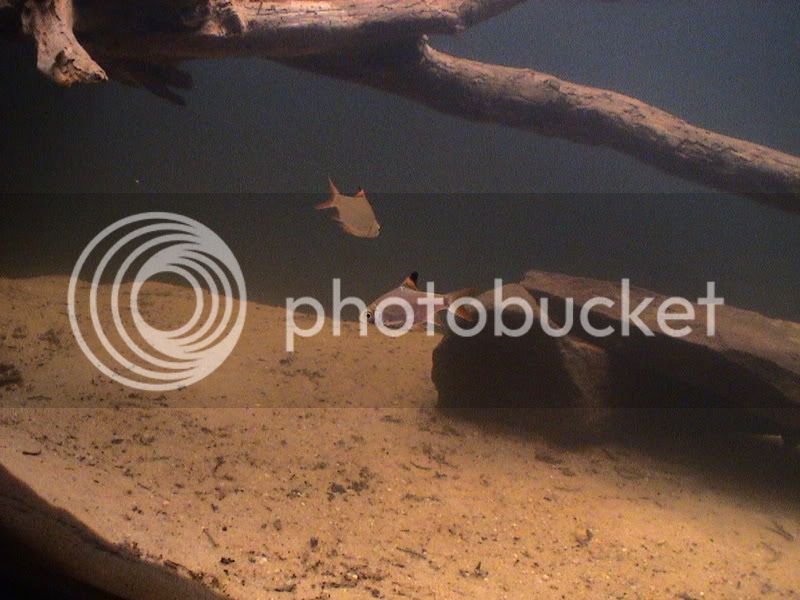 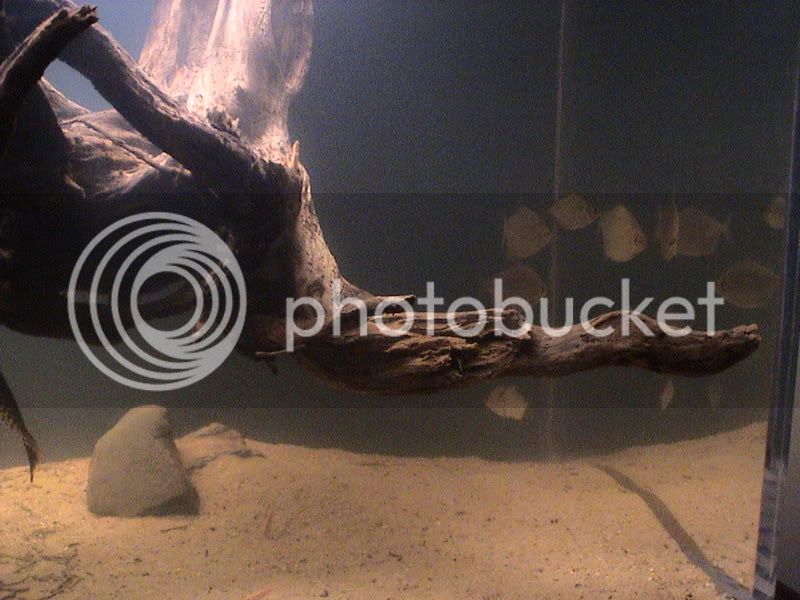 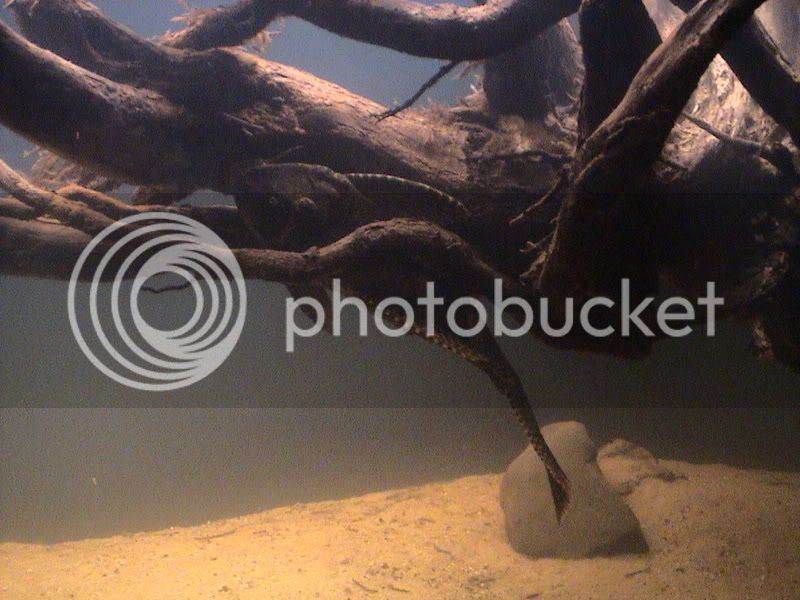 love the sail. here i planted some onion plants. the only thing my silver dollars wouldnt eat. they even ate my anubias and java fern! 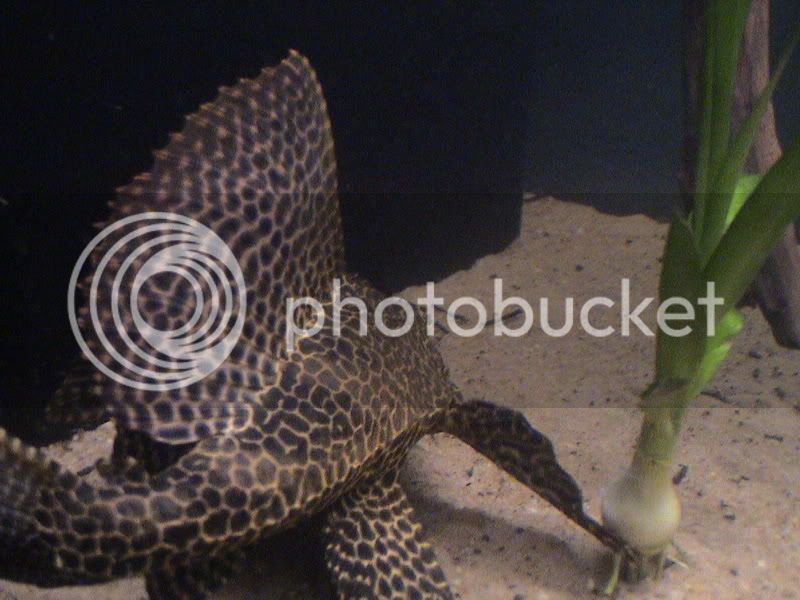 took about 3 months for the wood to sink... 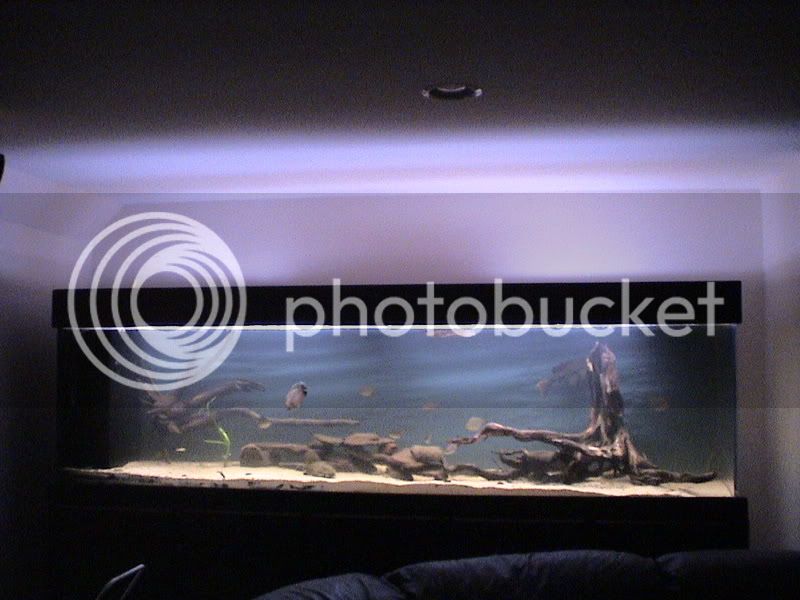 got a golden oscar 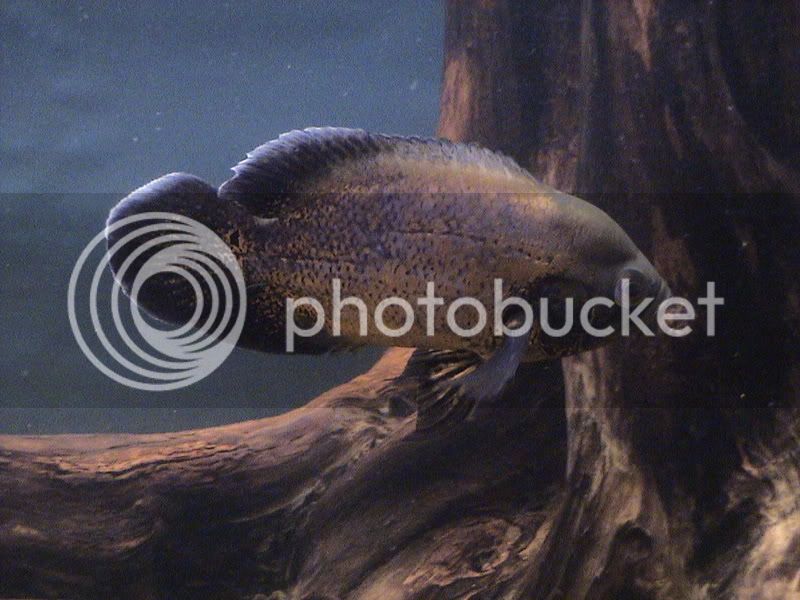 here is my little prochilodus...i still have him and now he is about 10 inches. in the pic he is 4-5 inches. 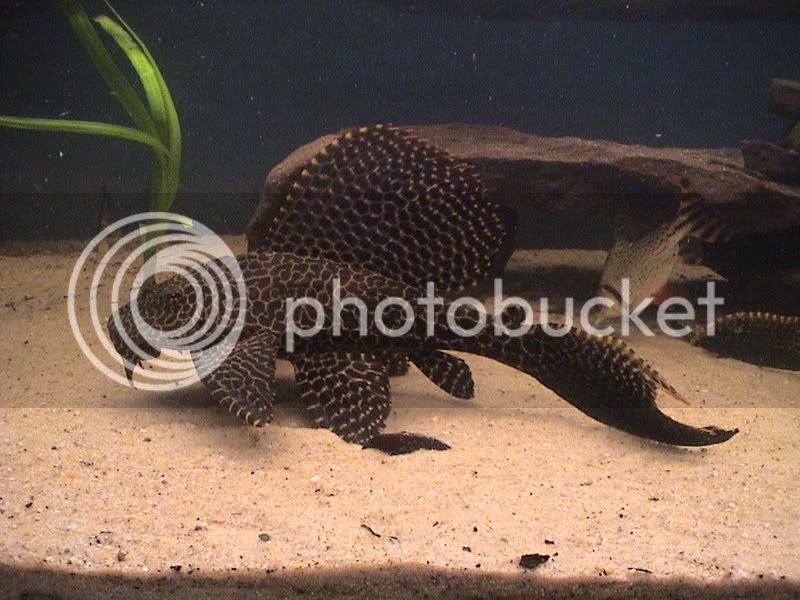 here i added a large albino female oscar and a male black tiger oscar. i had them in my 75 gallon for a while. i got rid of my small albino oscar since it was getting beat up. 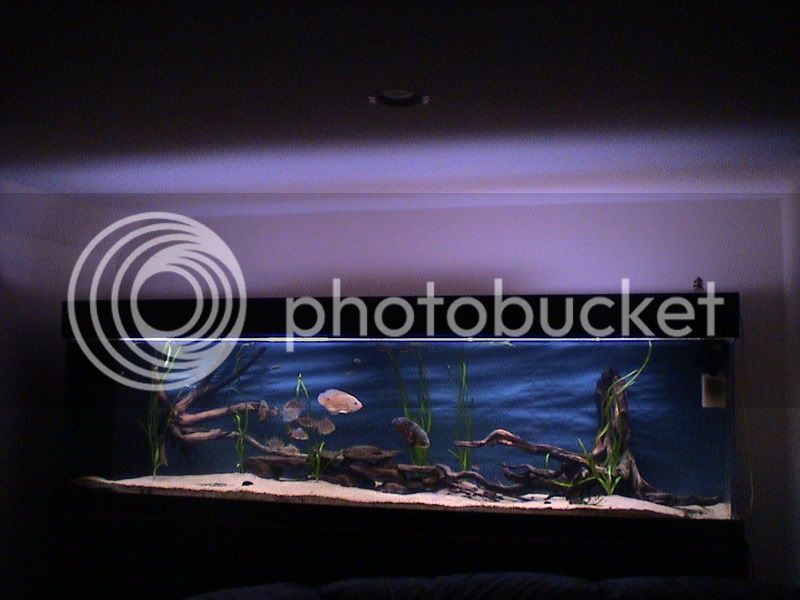 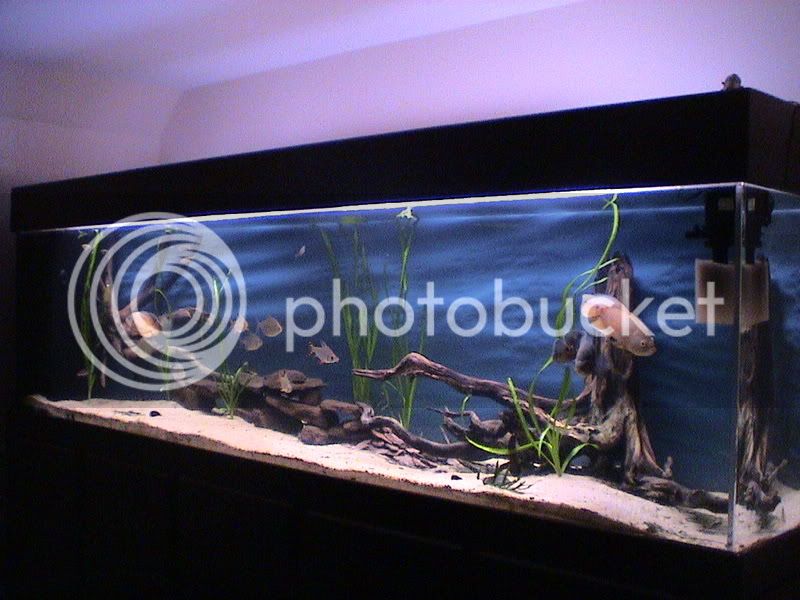 the tiger oscars paired up and started clearing off some slate for breeding. 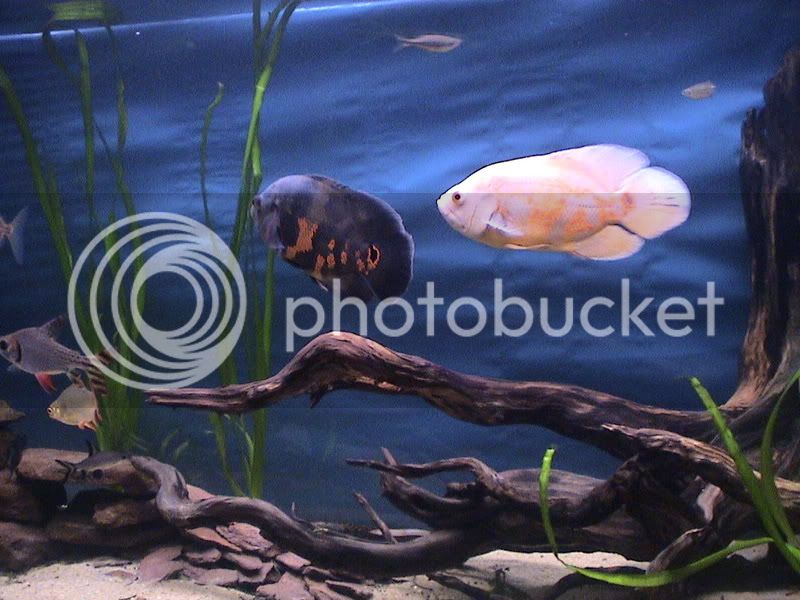 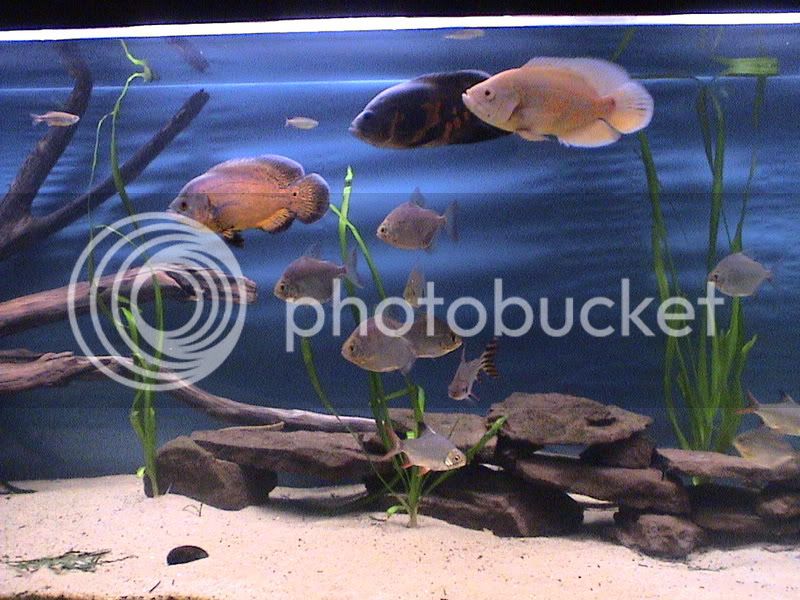 got these 2 ropefish. they were around 16 inches each. one killed the other...bit out its eyes and all. 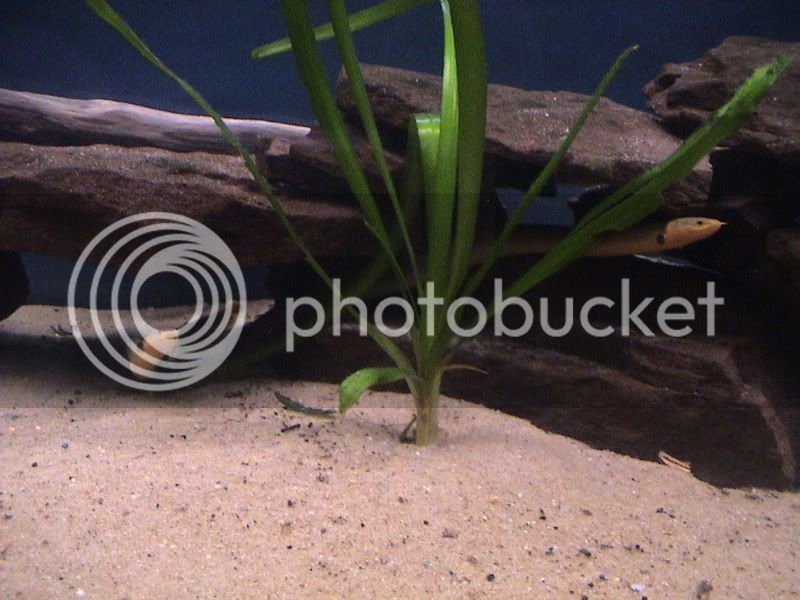 the silver dollars here are the size of a small dinner plate (5-7 inches long). 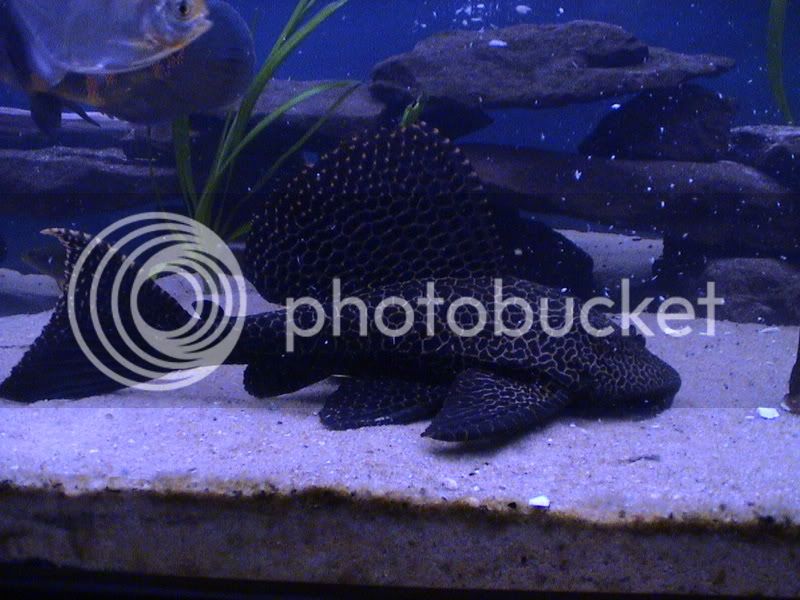 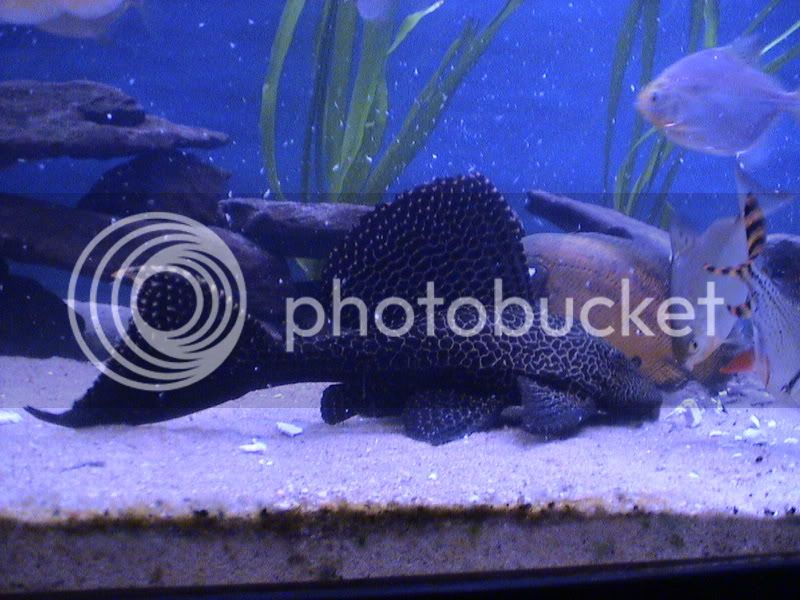 a yellow perch i caught and added to the tank 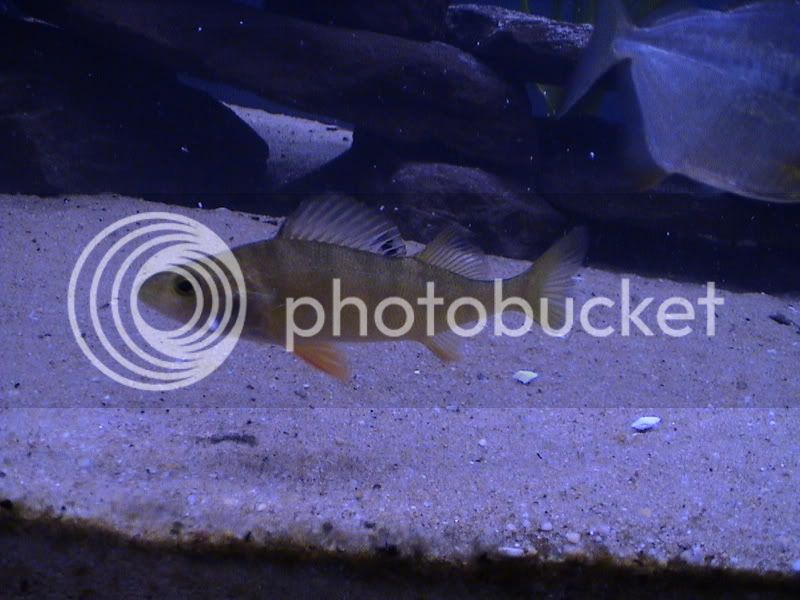 the seam busted and flooded my basement. thousands in damage and the house was not even two years old. i found out later the pet store dropped it once and claimed they told me ( because i would buy a broken tank) when they spoke to the insurance company. also found out the manufacturer had a lot of bad tanks and messed up. apparently, they didnt know what they were doing. 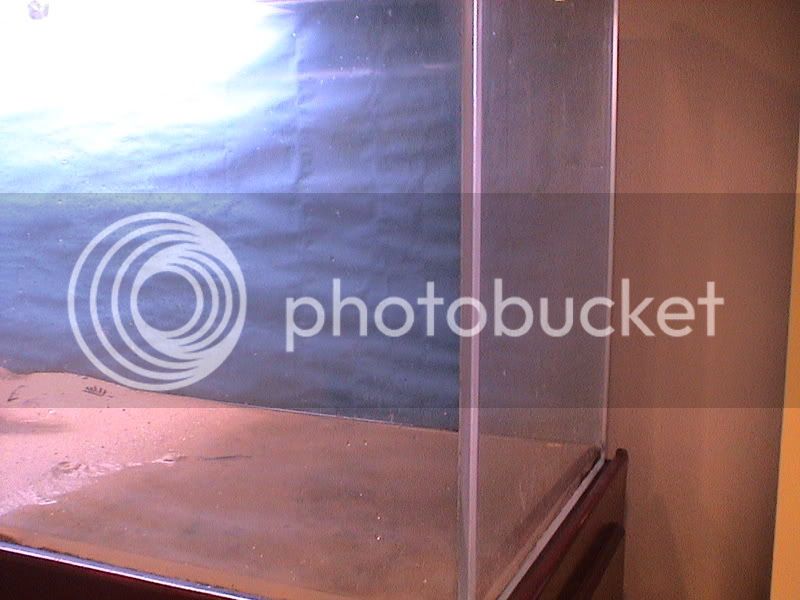 the gap in the seam 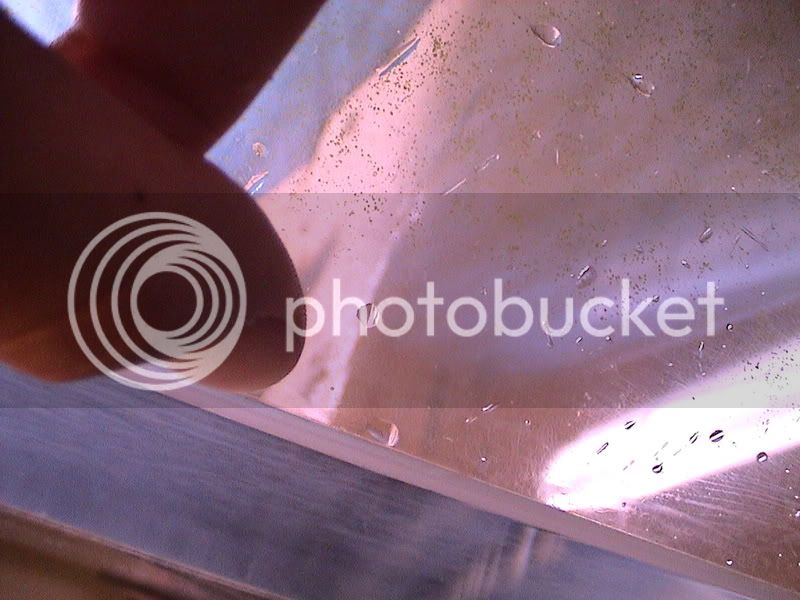 the force of it cracked the top 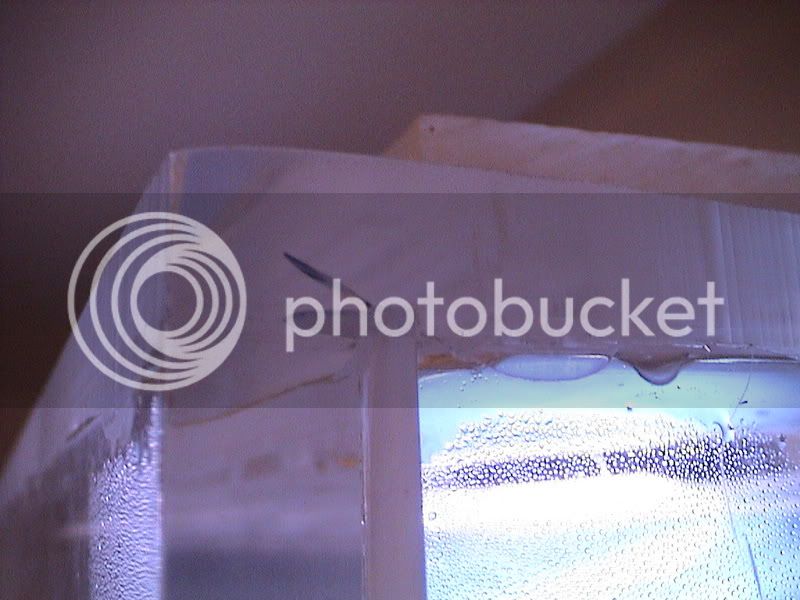 the darker area is where the damage was and where the water leaked out. 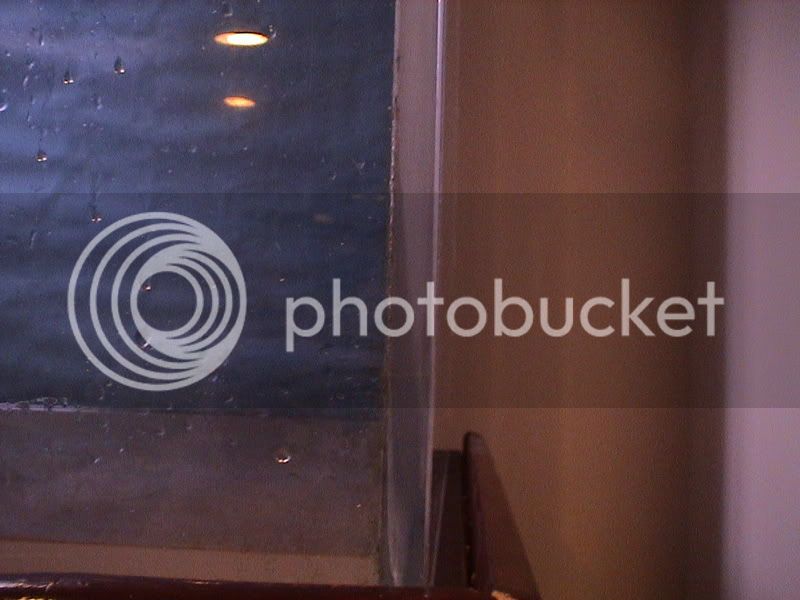 the stand got warped. i spent 3 months building it from scratch. costed a grand in lumber and was backbreaking. it was a 10 foot long solid piece. i staind it and all. had to chop it up at the end. 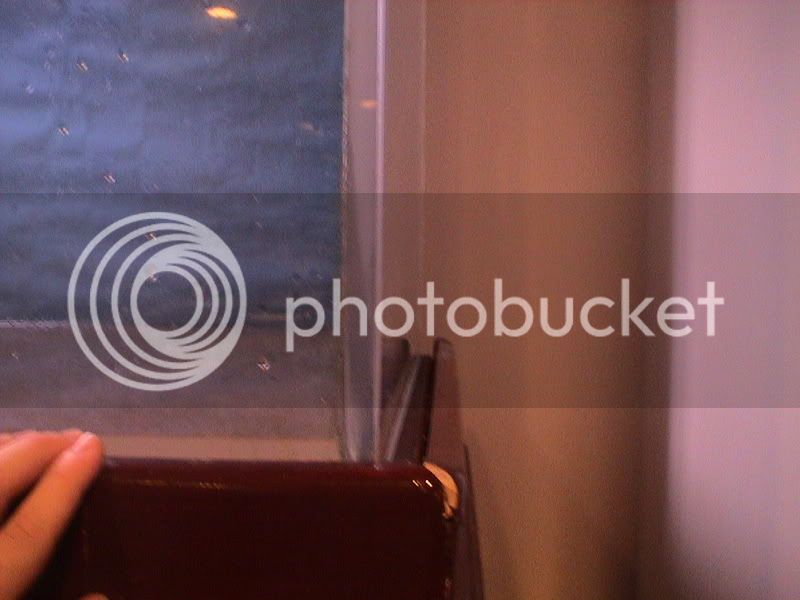 i feel so bad, what happned to the fish?
Expand signature
IM ADDICTED TO FISH!!!!!!! :crazy:

dang man that sucks big time. Im sure you are keeping a good eye on that 125g of yours now.
Expand signature
My Aquatic Jungle
​
:headbang2:55G Planted (updated 2/25/13):headbang2:

very careful with the 125. i have a 600 gallon tank but im not setting it up for a while.
the fish all lived in a 75 gallon for a few weeks until i gave them to friends or sold them off.
the large dominant male sailfin i keep by a friend. he is around 25 inches. we named him tiny. he is a crap factory, but what a sight!
i adopted the sailfins when they were 10 inches and about 1.5 years old from a woman keeping them in a 75 gallon tank. they almost doubled in size in a year. maybe it was the driftwood the always chewed on or the room they had. they always fought with each other and even the oscars knew not to mess. it was fun but i felt bad for the other sailfins so i found them new homes.
Expand signature
click here to see my 450 gallon tank
click here to see my 150 gallon african tank journal
click here to see my 125 gallon planted tank journal
Click here to see my 75 gallon cichlid tank
http://jaysen223.deviantart.com

Oh man, I'm so sorry to hear about that.

Awsome looking while it lasted! I like the effect the paper had on the back!
Expand signature
http://www.shroom.instantws.com/fish.htm