I assume this is a parasite my serpae is trying to evacuate. I do get lots of dog hair in the tank because....well....dogs. But this appears to possibly be a worm of some sort. How do I determine what it is and what Med do you all recommend? 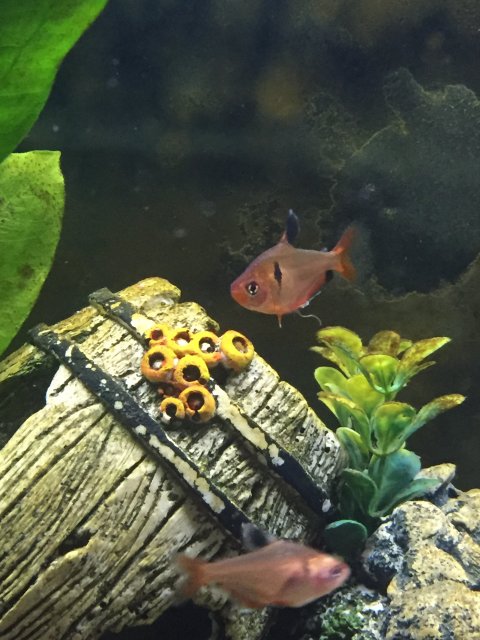 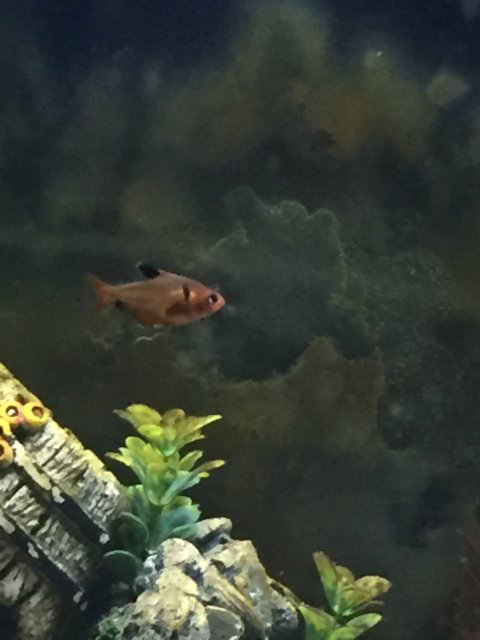 Well, it could be a parasite, rather more likely than dog hair to my eye. I use flubendazole because I have it. It also might be bacteria...& that's a different tx.

Metronidizole "might" help with either, but I've never had good luck with it.

Does the fish eat? What do you feed?

There are medicated foods too, I've gotten them from angelsplus in the past...if the fish is eating well.

Eats like a champ. I feed flake and freeze dried blood worms. This is the first I’ve seen of any parasites in any of my fish. His colors are bright and he appears healthy. Just want to narrow down what I’m dealing with so I’m not dumping a ton of different meds into the tank.
F

Try not feeding the freeze dried worms for several days & see if that's the problem. There's a lot of chitin, undigestible outer parts, to frozen, & especially freeze dried worms. That can mean pooping that part out in an alarming way. I hope that's all it is. Good luck!
Reactions: ustabefast and DaisyTattoo

Thanks! I’ll give that a try
T

It doesn't look like a worm (the worm you're thinking of is Camallanus) but it still could mean the fish has intestinal parasites. Microscopic examination of the fecal matter would reveal if they are flagellates like Hexamita or Spironucleus or worm eggs from for example Capillaria present. In the best case it could be due to overfeeding.
And don't let your dogs swim in the tank

I work in vet Med. I know how to run dog and cat fecal, but not fish lol. And I promise to try and keep the dogs out of the tank.
T

Metro tends to work best if fed. Flubendazole is goos stuff but hard to dissolve. Dr. Charles Harrison has a great paper on this med and how to administer it here http://www.inkmkr.com/Fish/FlubendazoleTreatment.pdf

I have in my fish med kit for parasites/worms : PraziPro, Metro, Flubendazole and Levamisole HCL. I get the latter two meds from Dr. harrison's site http://www.inkmkr.com/Fish/ItemsForSale.html
“No one has ever become poor by giving.” Anonymous
“Everyone is entitled to his own opinion, but not to his own facts." Daniel Patrick Moynihan
"The good thing about science is that it’s true whether or not you believe in it." Neil DeGrasse Tyson
Reactions: DaisyTattoo
T

It is not advisable to use these medications 1) without knowing the cause for sure 2) without a hospital tank.
Catch fish and put fecal matter under a microscope. Hexamita/Spironucleus are small fast moving dots.
Capillaria eggs look like this: 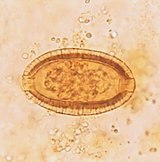 There are also medicated foods since the fish is eating. I've gotten them from angelsplus. But you do need an idea or good guess of what might be the problem to know which to choose. I'd think if 1 fish has whatever, all the same species bought at the same time would have some level of the same thing. & so might any other fish in the tank by now.

Fenbendazole needs to be fed to work, but it's similar to flubendazole. I don't recall the brand but there's prazi/metro combo med, I haven't used it. Levamisole I have used but it doesn't kill the eggs so needs to be redosed in ~2 weeks. It's fairly mild compared to some meds IME, but some fish may be sensitive. I often treat wild caught loaches in quarantine "just in case", but add half a dose in the am & half in the pm just to be extra safe. I "think" it's capillaria it treats.

It helps a lot that you can look under a microscope, but in a decorated tank it'll be hard to get a sample, lol. Yes, a bare hospital tank would help.