Good for you, cheap tanks are the best
But it is difficult to give recommendations as light is crucial for aquatic plants, you got to know where you are on the spectrum. There aren't that many low light plants, the more light you have the more choice you have. Does the fixture at least have a watt rating?
T

Good for you, cheap tanks are the best
But it is difficult to give recommendations as light is crucial for aquatic plants, you got to know where you are on the spectrum. There aren't that many low light plants, the more light you have the more choice you have. Does the fixture at least have a watt rating?
D

I'm not a fan of stem plants at all.

personally, if staying lower light, I'd go with crypts and/or chain swords (or vesuvius sword for that matter) Some will give you more height than others, Vals might work well in your water too.

If looking for more height, I'd be going with driftwood with bucephelandra or anubius. Both are available from big box stores, (I think In-vitro/tissue cultured from Florida Aquatic Nurseries, who are the largest plant grower/supplier in the US, you shouldn't have too much trouble finding them)
Randon Chat Quote
i do love to slurp it in unencumbered by object

I picked up a small Amazon Sword on Sunday and planted it off center to the right. It will have to grow into the space.

Thinking further, I plan on taking three small Anubias Nana plants from another tank and putting them on the larger driftwood piece to the left. I also have about a softball size ball of Taiwan Moss I am considering attaching to the taller, slender driftwood on the right for a sort of tree effect. Both of these are free floating in the tank as of this evening.

After that, I like the idea of Java fern or crypt wendtii and jungle or spiral vals, but not sure exactly how I would place them.

Thoughts on any of that?

Does this tell you anything worthwhile about the bulbs? I'm not sure what I'm looking at. 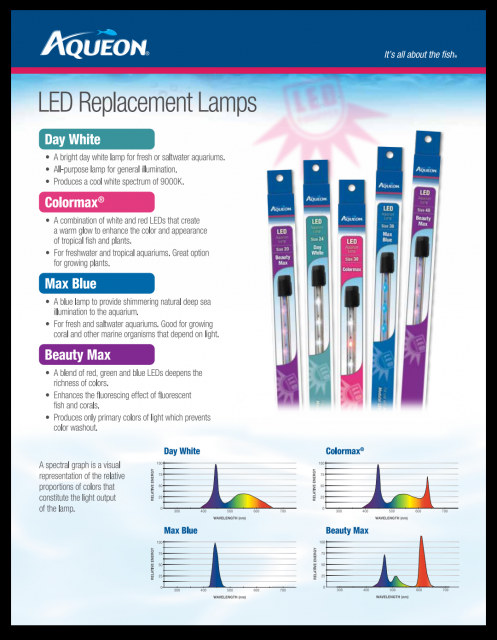 That only shows the spectral output of the emitters... It will indicate, sort of, how your aquarium inhabitants will look, but not necessarily how well plants (or algae) will grow.
Randon Chat Quote
i do love to slurp it in unencumbered by object
T

Led replacements for fluorescent bulbs. I wouldn't recommend these. Too expensive and only "save energy" because they have less than half of the Lumen output of fluorescents (and you need as much Lumen as you can get for plant growth). In essence it would be replacing a 36watt fluorescent with an 18 watt, to "save energy" but you also half the output. Anything without a Lumen, CRI and color temperature specification is useless, they leave that out on purpose because they can't compete yet with fluorescent tubes.

If you already have fluorescent fixtures, just get fluorescent tubes. The cheapest option is Phillips 865 or Osram 860. Those are 6500K and have about the highest output in Lumen possible for a fluorescent of that size. CRI is only around 85 though, but they are only like $3 a piece.

The best fluorescent tube I have ever seen is the Osram Skywhite 880. It is 8000K with a CRI of 90+ but only has slightly less Lumens. They are slightly more expensive, around $5-$6 per tube.

Other aquarium specialty bulbs can be as good, but are mostly 10 to 20 times the price, and never come close to the Lumen output of the 860/865/880. (More customization=less output)

Incidentally they do have excellent led strips with the right specifications, but those are never marketed for aquariums just for general use.

Remember you can also grow plants like we did in the old days, with incandescent bulbs or the cheapest fluorescent bulbs from the hardware store. It just won't look good, the fish will look like they're swimming in apple juice. The plants don't mind though...
Last edited: Aug 9, 2018
F

Ya know, I'm able to grow all low & medium light plants with old fashioned (& old bulbs too)T-5 & T-8s. I don't get LEDs yet, I need more reliable info before I invest in them. My fish look great!

I've also been on a major moss hate for several years. It grows everywhere!! although slowly, it's still a PITA. I just discovered some in my crypt grow out tank, gah! I was "sure" I weeded it all out, hah!

Stem plants, as dougall said, need more maintenance. I'm into lazy gardening, I don't like plants that need trimming every week or 2, maybe a bunch or 2 at most, & only the hardiest types.

I LOVE crypts of all kinds! So many shapes & colors, what's not to love?
Reactions: dougall
T

Led strips are great for prefab tanks that don't have space to put more fluorescents in (almost all of them). Also all leds will still dim significantly over time (as do fluorescents, but those are only a fraction of the price) If you do the math, led replacements for fluorescents aren't currently worth the investment. They will have to get like 3 times more powerful per watt for a more competitive price before it will get economical (and providing they have the same color temperature, CRI and Lumen)
PS the examples I gave in my previous post were all T8's...