TL;DR: RCC with brown marking unlike other smaller crabs but gets "picked on" by them a lot. New to crabs so not sure if sick, old, or just a weird crab pacifist. Pics below. Stats within.


Hello! I've recently plunged into the world of Crabs starting with an impulse buy from Walmart (I know, maybe I'll share the story later) and am now the proud owner of 3 adorable Red Clawed Crabs. I've been lurking on these forums (along with a few others) and just wanted to start with saying thank you so much for the tips and help with getting them set up and happy! Now for my question.

I'm not sure if I'm just being over-worried, it's still just the novice-ness in me, or if something is going on here. One of the crab's color and (at least my expected) behavior has me "hmm"-ing a little. She's the biggest crab in the tank, but seems to be getting "punked" out by the other two, smaller crabs at every turn and opportunity. She's also got this brown "patterning" on her back that almost makes me worried its some sort of disease/fungus (hopefully pics attached, saw something about new forum members not being able to post some things). Just wanted to ask around if anyone knew anything about this and can calm my new, crab-rental nerves (get it? Like parental? But with crabs? I'll stop now...) or give me a heads up about something I should actually take action against.

Quick overview of the tank (again, I'll try to add a picture. If successful, you can see the crab in question in the bottom right): 3 crabs total, all female (Ruby, Swee'Pea, and Olive Oyl. Olive is the one in question, poor Popeye didn't make it, more on him later). Temp has been around 80 F lately due to the summer heat but never really higher than that. Salinity is around .005 using Instant Ocean Marine Salt. Water's been treated with Aqueon Water Conditioner (usually sits for at least a day before using). Diet so far has consisted of Omega One Freeze Dried Blood Worms (they don't seem to really bother with them too much) and Hikari Crab Cuisine (they love that stuff). If you need any other info, please let me know.

Reason I'm so worried is Olive's original tankmate, Popeye (male RCC that I got at the same time as her), was more of a dull brown color than a darker brown/blackish color with very dull brown-red claws. He was somewhat lively but seemed more like the grumpy old man than the big dog on the block I expected him to be (he was the biggest kid in the playground). Few days after getting him, decided one more couldn't hurt and got Swee'Pea (smallest at the time). Everything seemed happy in the neighborhood until a few days later when I noticed Popeye was kicked out of his normal home by Olive and was missing an arm. Thought that was strange but was late for work so had to take off. Got home and noticed he was still in the exact same spot, but now a leg missing too. Thinking maybe Olive taking advantage of him molting or something until I noticed her dragging him into her "lair" with absolutely no response from him. I scared her away from him, very gently and slowly game them more distance, and called it several hours later when I noticed he couldn't even keep his eye stalks up anymore. Now seeing Olive be a bit more sluggish than usual (not sure if she's just used to me moving about now or if it's something else. They're right next to my computer so they get plenty of "bonding" time with me) and her seemingly starting to be getting taken over by a similar brownish thing, I just want to know what to expect if there is something wrong.

Sorry for such a long post, I just notice many posts asking for help with little to no details so I figured I should give the whole story vs risk omitting details. Please either help my crab or my nerves xD

EDIT: So I can't do pictures. I hope the description above covers it and the pics won't be necessary. If they are, maybe direct messages would work if someone is interested enough? Sorry, just new to posting.

(Insert attempt to do pictures here)

The rest seems to not have any signs of the lighter coloring and have no issues starting problems with her (a sign for me of some sort of weakness through sickness or old age). Just want to make sure it's not something I can/should worry about.
S 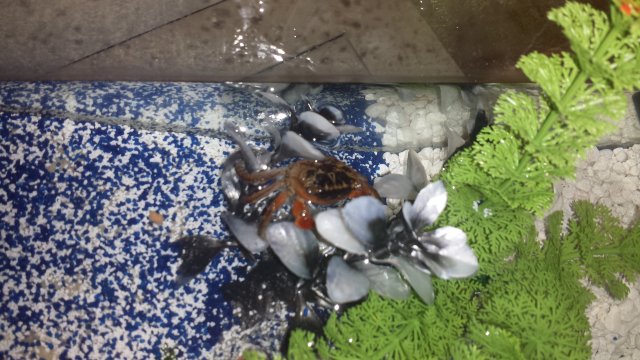 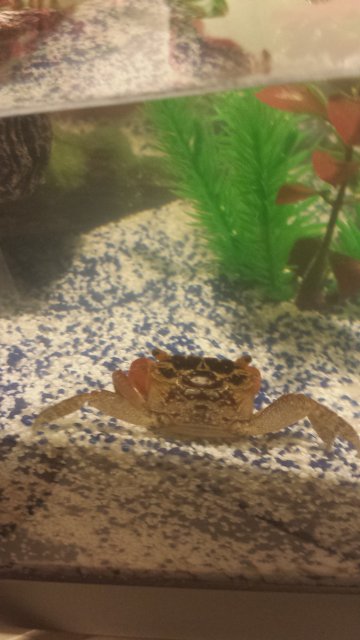 Here's her underwater with a good view of her back 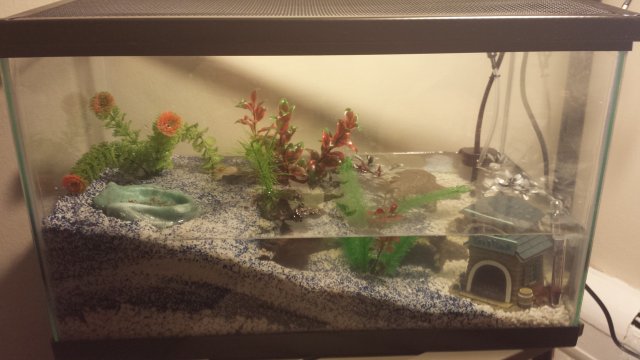 Here's the overview of the tank. If you look, you can see Olive in the bottom right hanging out by the thermometer. Sorry it's a bit murky, I need to do a change soon.
You must log in or register to reply here.
Share:
Facebook Twitter Reddit Pinterest Tumblr WhatsApp Email Link
Top Bottom