There is no reason for 2 x 300 on your tank. If the older one was about to die and you got a newer one, all you needed to do was to move the media from the broken to the new and save the parts from the older filter that are still able to serve as repalcements if needed (intake tubes, the lid and other useful parts). Adding a filter adoes not create more bacteria. At best it spreads out the existing amount of bacteria between the two filters.

The bacteria live immobilized in a biofilm attached to hard surfaces and out of direct light. The total amount of bacteria will increase or decrease in response to a change in the ammonia loading in a tank. When there is more than they need, they multiply faster than they die. if there is less ammonia, they reproduce ever slower until the colony shrinks to the size that thrives on the reduced ammonia level.

So, when we add a filter to a tank we are just giving the bacteria more choices of where to live, but the addition does nothing to increase the amount of bacteria. By leaving two filters for a bit of time in a tank that had only one you are pretty much insuring that moving one of the filters will mean moving about 1/2 the combined bacteria they contain. Depending on the tank that can be a bigger or smaller part of the total bacteria in a tank. It lives anywhere it can get what it needs delivered to it.

Have you tried doing a decent cleaning on the older filter? Have you checked the impeller to see if when out of the filters it spins smoothly? I have had the magnetic cylinder on the impeller split open on a canister impeller. Can you tell if the impeller shaft is bent at all? These things are cheaper to have replaced than a whole filter.

Just as an FYI- the AC 20, 30, 50 and 70 all use the same motor and shaft. What differs in the models is the impeller. I have owned a lot of ACs over the years. I still have 18.I have never had one quit as in not be fixable for much less than the cost of a new one.
Expand signature
Vlad the Butcher.
Killer of women, children and old men.
N

Well that’s good to know! I was under the assumption that I had to run the new to help keep the load stable. Some one told me or I read that if I start with a new filter that it could crash my system? I though I just had to move the carbon and rings to the new filter to help keep it stable? I did take and clean the old impeller and such. I had a prefilter on it to keep my shrimp from getting sucked into the filter and thought maybe that gunked it up? Flow seems really light now though so I was afraid it was going to crap out. I’ll take it off tonight and keep the parts as spares.
T

A pre-filter is a good idea. However, the most important consideration is that it not clog too easily so you should rinse it weekly. Foam/sponge comes in different porosity. This refers to the size of the holes in it. The more holes, the finer it is and the faster it will clog. So the best choices of pre-filters are generally a coarser foam.

I have made my own from AC sponges and Poret foam. i have also used the ATI pre-filters, but I do not suggest them for most hang-on filters. Her is a picture of one of my homemade from an AC sponge pre-filter. It is on an AC intake. 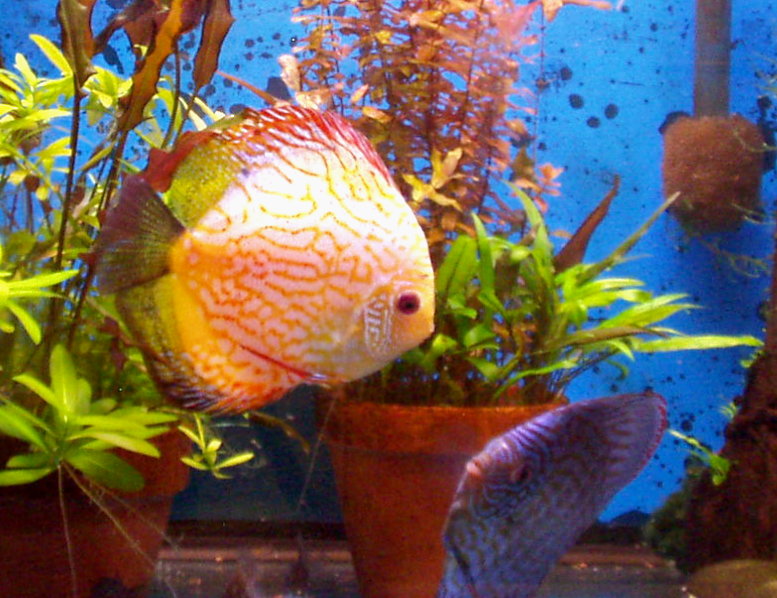 Nyk0nn said:
Yeah I’m familiar with the melt. I had two crypts in my main tank awhile back when I first started. They both melted bad and I thought they were dead, little did I know they could have came back. There isn’t any Amina’s in that tank, I’m sorry. I put them in my main when one was supposed to go in that tank. I picked up a nice piece of wood and put the Anubis’s on there. Not a fan of how I put the Java fern but it’s too late now. I have all my tanks on a 9 hour schedule except the main is only on 8 hour cause I’m fighting some black beard algae.

View attachment 230788
The glue let go and now this wood is floating…
I tried to drill holes in two different rocks so I could screw one of them on the bottom and they both split while drilling. The one never made it an inch in.. Is there and easy way to take plants off that are glued on? Or am I just taking a loss and starting over with new plants and wood?
Click to expand...