And sorry for the absolutely terrible picture quality. 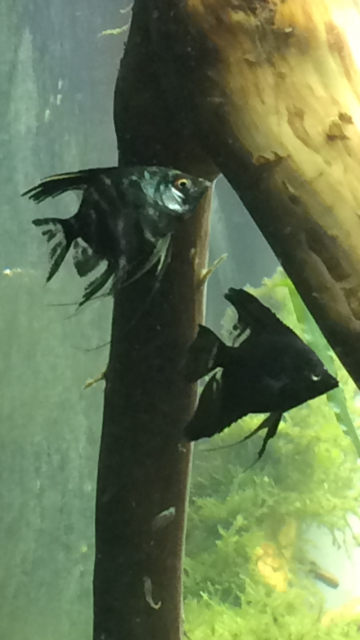 Here's my other angel. I'd love to know the genders of these three if anyone can help... 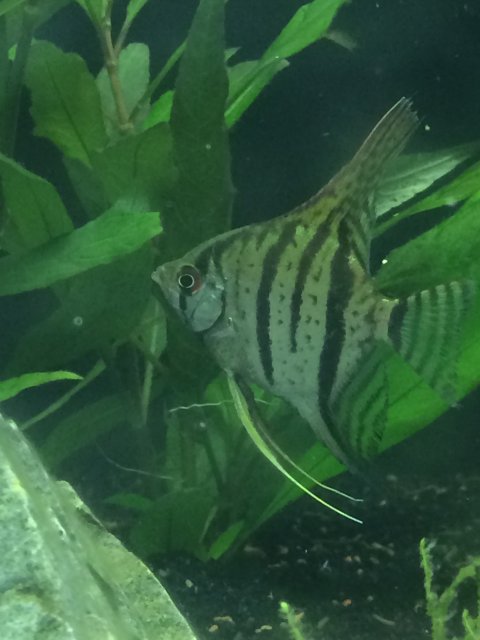 My clues were the female breeding tube was wider than the males silt tube. A lot of the time the females tube was longer too. Post more pics as they progress!

Also on my older ones, one sex had more visible bump on the forehead. Sorry I cannot remember m or f, but it was pretty accurate with my older ones. The bump is referred to a "stop" on dog breeds if you are familiar with that? Same idea only in a fish rather than a dog
F

With my angels, I could tell M from F by posturing behavior. Boys wide & aggressive ventral (pectoral) fins, girls held daintily closer together. I saw that behavior at least 3 times...sigh...& like Wild West said, there's humped forehead in most males, dog stop or whatever want to call it in ciclhids of many kinds.


From your pics I'd guess top black right fish is male, second pic is female...& top left is a poor stunted...something...sorry, it's not a good specimen for sexing or breeding IMO, not that it isn't a good pet in just that way...football shapes are not a good breeding choice... & the work of breeding "ok-ish" fish (or less than) is just as hard as breeding the "better" ones. This is where the hard choice of culling should have happened...earlier...sorry to say...but honest...sigh...been there, don't do it...Not worth the work even if it's the opposite sex of the others, if I'm wrong...entirely possible!!
You must log in or register to reply here.
Share:
Facebook Twitter Reddit Pinterest Tumblr WhatsApp Email Link
Top Bottom