Pliz stop scaring me. Gravel will no b at bottom. But what do u mean? But will it sink to bottom? Hope no.

i must say the guppy is unaffected by those bit so last water change and will b adding plants and then acclimating my sparklers
Expand signature
Want a goldfish? You have one or more in a bowl or small tank? Read this:

dougall said:
Putting fish in before getting answers from experienced aquarists would not even make my list if things to do.
Click to expand...

But got no answer what to do about those thingies. Just doing water changes now to remove those.
I know I did fine with the set up, i did it like foo the flowerhorn did. But his soil is miracle grow one so it sunk to bottom but mine is bit different, i had to soak the soil in water to cap it and i think the soils need to drink bit of water and will sink down. What else can i do? The spaklers spent half a day in their bag. I have to put them in the tank sometime?
Expand signature
Want a goldfish? You have one or more in a bowl or small tank? Read this:

You will need to test the tank water for ammonia daily for the next couple weeks to see if you experience an ammonia spike because of the addition of soil. I would also check the pH at the same time.
Expand signature
Dee

I suggest learning a little patience, maybe ask Floo the Flowerhorn for advice.. they are apparently the expert anyway
Expand signature
Randon Chat Quote
i do love to slurp it in unencumbered by object
Reactions: Sprinkle and Wyomingite

dudley said:
You will need to test the tank water for ammonia daily for the next couple weeks to see if you experience an ammonia spike because of the addition of soil. I would also check the pH at the same time.
Click to expand...

Done loads of water changes to that tank today so no test today, but will test tomorrow! thanks for the tip dudley!

Expand signature
Want a goldfish? You have one or more in a bowl or small tank? Read this:

I suggest learning a little patience, maybe ask Floo the Flowerhorn for advice.. they are apparently the expert anyway
Click to expand...

Patience, not my thing. My sisters are no patient either.. LOL.

i do no know how to get in touch with him..but i would love it.
Expand signature
Want a goldfish? You have one or more in a bowl or small tank? Read this:

Set up the tank. It does no look like the sharpest tool in the shed yet...but looks alright 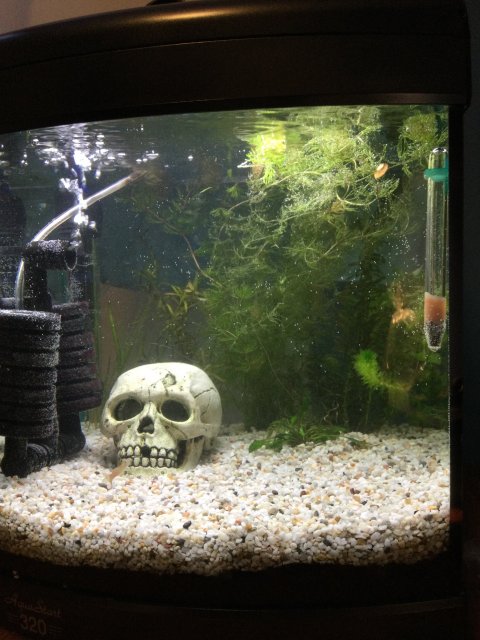 Expand signature
Want a goldfish? You have one or more in a bowl or small tank? Read this:

Dougall is right, Sprinkle. A little patience. It's hard, I know, shoots, even I want to jump the gun sometimes. But think of your tanks as a fine wine. It's not so good at first but it improves with age.

After having the same experiences as you with soil and a gravel cap the first few times, I started using sand to cap the soil in my Walstad-style tanks. I have also always used a small filter, which wasn't part of her original process if I remember correctly, and I've also was never able to use natural light because of the placement of tanks. I've also cycled the tanks normally before adding anything living, plant or animal. Of course, this was before the internet was well-established (maybe it didn't even exist, for all I remember) and I didn't even think about forums. I wish I would have had an internet the first few years of my hobby experience.

When freshyfresh talked about the gravel sinking to the bottom, well, that is something that will happen over time, not something that will happen immediately. It does look like it may start to sink eventually, especially when you start adding plants. IME it's almost impossible to not have a bit of the dirt released into the tank when planting anyways, regardless of the cap medium, so make sure the soil is inert without any additives or man-made substances.

So this is what I would do. I'd siphon out the particles and empty the tank of water completely. I'd then either carefully scoop out the cap layer and replace it with a finer gravel or sand, or I'd scoop out half the cap layer of gravel and replace it with sand while carefully mixing the sand and the remaining gravel into a single homogenous layer. I'd then carefully add water and start cycling the tank. When adding water, place a small bowl or dinner plate in the tank first and pour or run the water into the bowl/over the plate. This will help reduce the substrate being stirred up and destroying the integrity of the cap layer, thereby reducing how much soil gets stirred up. Just move the bowl a bit every now and then so that the water overflowing the sides doesn't move the cap layer so much that it gets down to the soil layer.

The past 3-1/2 years, have shifted from mainly Rift Valley cichlids to CA cichlids, livebearers, and a mix of other species.
Reactions: Sprinkle

Hey, thank for ur reply WYite! How long does it take for the gravel to sink down? This scre me the most..is it gonna b harmful to my fish? I can’t replace the gravel with sand now..the gravel costed me too much and ehm you know? The soil is perfectly fine, i just removed larger bits and that grit and seramis. So the particles won’t harm my fish? Oh! Almost forgot. I thought that granular convection would take the sand down just like the gravel?
if it happens if the gravel goes down, how do I fix so i could keep the same style as now (I love it, it is smexy LOL)?

*Edit*- I do have a very mature filter in there, it is mature for around 2yrs ish. When first i will get my daylight bulb, my plants gotta settle in and then i should remove the filter as i think by then i should have bacteria on surfaces

Nahh, i no have the patience. I want my sparklers in the tank LOL
Expand signature
Want a goldfish? You have one or more in a bowl or small tank? Read this: