Will my female Krib accept a new mate...?

I recently bought a 2yo krib pair, and the male died. My female basically just hides in her coconut shell cave all the time. They came from a community tank and apparently she was hand fed and very friendly. I guess the stress of moving and losing her mate will take a while to recover from.

Two days ago I moved her into my new 160L (40gal?) tank with a sandy substrate (from my 60L). Atm the tank is set up very minimal because I want to introduce new things slowly. I put a tunnel and her coconut cave from the last tank in there with her, and there are 3 fake plants that came with the tank as well as a small Giant Baby Tears plant that I just bought. I've put a male guppy and two juvenile guppies in there with her.

I'm sure she's already much happier, she's been digging around in the sand, made a small pile outside her 'door' and been spitting sand out the top of her cave as well (yeah, my 5yo son 'made another window' in it for her...!). I also have a terracotta pot as another cave but just waiting for my java moss to arrive as I want to plug the drainage hole with that before putting it in the tank.

But I really want to get another male for her. I've read that kribs can bond for life... but how likely are they to accept a new mate? My LFS has a male for me now so I've dropped a water sample off for them to check as I want to double-check that the tank has cycled properly (tested before I moved the fish in as well) and figure out how long I should wait before introducing another fish.

But my big question is, is there anything I can do to provide an environment that will encourage them to bond? 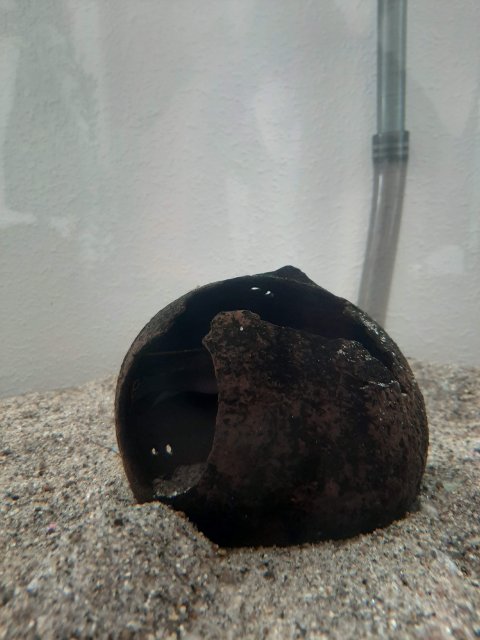 Well, we bred kribs for several years (until rehoming was a major problem). Neither males or females are too fussy about a new mate. IME females are more in control of mate selection than males...They may be smaller but they know what they like...& breeding doesn't make for very tame pets...hormones over people hand feeding...it's not people they prefer Give her some time then try a male. If he's smaller...there may be trouble. Young males are not always ready to "go"; she may not be patient...Do you have a smaller tank for him to grow out into?
A

okay thanks, that sounds hopeful...! These blokes are about her size from what I can see, they say they're fully grown so hopefully no trouble there. Although I do have another tank I could put him in if they fight... and maybe just keep trying them every few weeks?
F

He needs to be larger than she is or she will likely beat the snot out of him...It's good you have a back up tank, you may well need it! Males don't usually fight too much if there isn't a female but there's no telling, they're cichlids after all...Good luck!
Reactions: Sprinkle
A

Thanks for that. I have him now and he's def smaller... she's not too happy about it and chasing. It's great to actually see her! He seems pretty chilled, doesn't fight back at all and only moves away when he has too. Finger crossed he chills her out and here's to hoping no one is dead in the morning...!

UPDATE: so this morning they're both still alive... which is happy! I put a new rock cave in last night so he has another shelter spot but I don't have many plants yet, so he doesn't have a lot of hiding spaces. She's still chasing him aggressively. He doesn't look ragged or injured (she seems to head butt him straight in the side rather than fin nip, although she does go for his fins and tail as well).

Even if he seems physically okay, at what point can I tell if he's so stressed that I should give him a break?

Any tips appreciated, thanks in advance
F

Is he able to get enough food? Does he look pale? Your tank looks pretty bare. Plants & or more hiding places will allow him to get out of her line of sight, add more now! Even rocks from your yard (washed well, no soap). You can change things later. If the ramming continues it'd be good to separate them, she really can hurt him.

Thanks for your reply. I have seen him eating, but I only feed once a day and he hasn't been in there for 24 hours yet... so will keep and eye on that. I fed him when I first put him in. Yes I added more rocks and another cave last night. I also have a terracotta pot I'll add as soon as I get plants to plug the drainage hole with.

I'm going out soon so will bring home some more plants.

I was slow to add the rocks because I want to keep a close eye on the PH, although I have read that Kribs aren't too sensitive to pH (between 5 and 8 ok?) but mine was up at 7.6 so wanted to be careful. I do have some driftwood soaking that is still floating, I could put that in as well just as an extra. Not sure it would help with pH tho as there's not much colour/tannins leaching out of it. But then I don't want to change too much in the tank at once.

Plants shouldn't be problematic tho so I think I'll start there.

Not sure if he's pale. Wasn't really bright when I got him. One thing he does seem to do is rest his 'chin' on something (like the heater or a rock) and it looks like he's eating, but I wonder if he's actually panting or something - wonder if that's a sign he's pretty stressed or if that's fairly normal behaviour?

She's not bullying constantly. They'll both rest in their caves for a while, she'll come out and have another go, then they go back to their caves again.

I'll update again tonight with how the rest of the day has gone... unless I decide to move him or anyone has any more advice that requires action.

I know it'll be stressful for him in there but moving him from tank to tank will be stressful too. So guess it's figuring out the wisdom of hoping she'll calm down or needing to move him!
F

Give them another couple days unless things get violent, then act fast! pH isn't a super big deal with kribs. They're riverine Africans & are more adaptable than some fish. When we had them we had pretty hard water back then but I think as long as changes are slow whatever (within reason) it's ok. Keep a sharp eye on them!

Plants are a good idea, they break up sight lines & help with water quality too. Don't wait, get some soon.
A

So I'm home with my plants... but they have pond snails... I don't really want them in my tank and not sure how to deal with that quickly. Wondering about shifting her to another tank until I can get more plants in there. That way when I put her back in, it's like she's new to his territory, rather than him invading hers. Don't know if that makes sense or would make any difference or not...

Unless you reckon I should just try them together for a bit longer? She's fairly constant and I reckon he's starting to look a bit ragged now... I don't want to give up too soon but also don't want to keep him in a stressful threatened position for any longer than necessary.

The other thing I could try is if I can find some sort of makeshift divider (with holes to let the water and possibly smaller fish through) and put that in the middle of the tank for a while so they can still see each other but can't get to each other?

Thanks for all your comments so far - really appreciate it. I can always google but sometimes there's just nothing like an actual conversation