For 18 years in aquarism, I have been more dedicated to saltwater aquariums, starting in 2002 with my first 10 gallon freshwater aquarium and as you can imagine, I had a bad combination of species, my tank was overcrowded and with totally disastrous equipment, but by then everything had changed, the immediate passion I felt for aquariums had changed my life, and I began to read and look for information, which was quite limited at that time, and soon Transform that poorly managed aquarium into a larger and properly established tank. However, a year passed from the beginning with my 10 gallon fresh water tank, and I immediately switched to salt water in 2003, with ups and downs over the years but I haven't lost my way or enthusiasm. Over time, I carried out some freshwater projects, the typical community aquarium with peaceful species, but they were tanks that dismantled within a few months, I did it in 2007, 2013 and 2015. However, in the middle of last year I started to buy freshwater fish for a 35 gallon tank again, I was looking for good-line scalars and I also bought other fish that caught my attention but that weeks later I gave them to other aquarists from my city.I currently have a 65 gallon saltwater tank, which will soon be moved to a new 130 gallon tank, freeing up the 65 gallon space. And this is when my most ambitious project in freshwater begins, I have always had the idea that I have 'something pending' with freshwater aquariums, and since August of last year I have some species that I really want to conserve, and I will use the 65 gallon tank that the saltwater fish will drop off, to do something exciting with fresh water.
The new idea is to set up a 65 gallon community freshwater tank, with exclusive species, little seen in aquarism and if possible, use the term 'rare'
I have reduced my list of scalars from 9 specimens to 5, which I describe below:
Marble scalare, Smokey, Albino pearlscale, Koi, and the most special for me, a wild scalar angel from the inirida river. I plan to reduce this list even more, and leave the place to fish of a greater exclusivity, you can notice that koi climbing is not unusual, but a red devil koi climbing is, that is a good example of how I want to base My community in this tank. Right?
I hope to start assembly during the first weeks of the following month.
Reactions: CichlidFins

This is the 65 gallon saltwater tank: 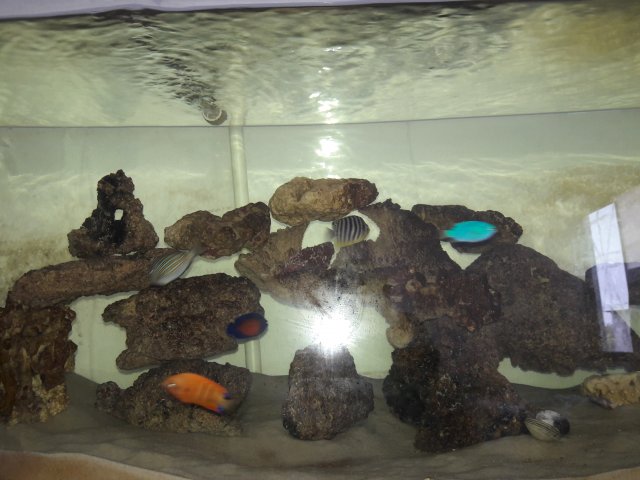 I just thought about sharing some of the species found on my wish list for this project:

That's quite a long list! I'm not sure what you mean by conserving rare species. Breeding? Or just keeping cool fish? A community tank isn't a great idea for breeding if you expect fry to survive. I no longer have that as a goal but I enjoy cichlid behaviors without the work of raising babies. A few fry may sometimes survive. If you really want to breed you'll need a separate tank...

Will you have live plants? They can help break up territories & besides, they're cool too. (I belong to a plant club, lol). Lots of wood &/or rocks can help too.

Some other thoughts: too many cichlids on your list; pelvichromis are larger & tougher than apistos. Corys don't understand territory issues, sids do.

Fishorama, thank you very much for your advice, I do not plan to have a fish breeding aquarium, my intention is to build a community tank, and indeed I will have low-requirement live plants, and a good amount of rocks and logs. I have no intention of raising any fish. I appreciate your suggestions, if it was your project then which fish would you remove from the list ??
The tank is 48 inches long, 16 inches wide and almost 20 inches tall, my angels are female, do you think they would aggressively take territory as well? If this works then I can consider buying a copy of P. Altum that is a female, at the moment there are 4 left and they are at 35 gallons, I have sold the largest fish.
F

I haven't kept altums but they are much wimpier than any form of angels & need a group to be happy...without "regular" angels to compete with. But like I said even a 4 ft tank is small...if you're absolutely positive!!! you have only females...well, that changes things... a bit. I had a female angel "pair" that even with a smaller male, preferred to lay eggs with each other. There's no accounting for cichlid (or anything's) taste in partners. Have a back up plan.

I've kept apistos but not those you list. You might get away with 2 pairs, or a trio (1 M & 2 F) of 1 species. But you may have problems with "other bottom fish" including sids & corys. I include apistos as "bottom fish", that's pretty much where they live. Same with Dicrossus & Laetacara, pick only 1 pair or maybe trio of 1 species...IF you can truly sex them. This would be instead of apistos.

As for schoolers, well, you're running out of tank space. Diamond tetra get 3 inches. I wish tanker was still around, I know she kept them with angels, & corys I think. Chocolate gouramis are way too wimpy & need a small tank of their own, I haven't kept them because of that. Angels & gouramis are NOT usually a good mix, especially big & small.

I'm all about loaches...& catfish these days, so take that into consideration too. Although I've kept fish for almost 40 years, I have my own preferences & experiences too I do still have a soft spot for cichlids especially those little cute 1s

Think some more about your possible choices & we'll try to help you narrow it down.
Reactions: angelcraze

Thank you for all your contributions fishorama. I suppose I will be forced to remove some of the cichlids I want to keep in this tank. Laetacara dorsigera is a fish that I have never seen here in my city, I live in Mexico, and here it is not easy to get fish of this type, but regarding the availability of specimens, I am thinking positively. I have a great desire to keep S. osphromenoides, and previously I have read suggestions like the one you wrote me, so I could also dedicate a smaller space to keep them, I just have a Trichopsis vittata in a 10 gallon aquarium, so I already have the idea.
Diamond tetra is a fish that I have never had but I want it badly, anyway I can try to get a bigger aquarium, maybe 90 gallons but I'm still not sure. If I could get this tank maybe I can recap the options on my wish list.
F

I love L. dorsigera! But I've never kept them...like you, they're never available when I have a place for them. That's why some of us have several (or many) tanks...& as I said my current focus is on loaches... & catfish.

I know it's hard to get some fish in different areas. Can you order online & have fish shipped? Or have you asked what fish your local shops can get for you? At least that way they pay for shipping & some even quarantine them. Ask to see their "fish list" they can order from their wholesaler. Be as charming as you can , it never hurts & you might get the fish you really want. If you have a few local fish shops, be a "regular customer" to all. Let them get to know you & the fish you like. I was "the Loach Lady" at my previous LFS & the help knew what I might like . Plus it's fun to talk fish with people who know...& some fish are seasonal as to their availability especially if they're wild caught. Is there a fish club near you? That's another option, at least sometimes.

Yes, narrow down your list of fish & we'll try to help more...others are looking even if I'm the only 1 answering you right now

I just located a business exactly in Mexico City, and I have seen that they obtain some unusual species, they are friendly people and although I have not yet bought anything from them, they continue to be my number one option, the imports they obtain are very interesting , and of course they can send. However, here in my city there is a family who also have a business, they are my friends since I started this hobby, and they often get some interesting fish, but currently I only manage these two options, the businesses that I have researched in the city of mexico they sell common fish, and here in my city other people's businesses only bore me with the fish they offer, this may not sound nice, but I love unusual fish, I am excited by those species that make you a little jump from his seat to see him because he doesn't know what he is, or doesn't know him.
There are no fish clubs here, but there are groups in my city with people in the networks where we share experiences, although we have never met. You can manage multiple aquariums due to the requirement of different species, and I have no doubt that you are doing an excellent job with your tanks. And I could not agree more with you, it is incredibly fun to chat about fish with people who know, and who are passionate about it.
F

I think you should start cycling your tank for freshwater beneficial bacteria (see the "sticky" at the top of this page). That can take a couple months...& talk to your fish shop friends about what fish you'd like & what species they can order...You can always keep the cycled tank going while waiting for your ideal fish...but finding the right fish at the wrong (uncycled tank) time can be a lot of hard work changing lots of water daily & very hard on fish too.