I don't know if it means anything gender-wise but I noticed some of your youngsters seem to have longer pectoral fins than others. Could just be the angle of the pics too.

You could host a small club gathering to help move tanks indoors or whatever help you need. They might like to get together for a food & tank event, it's been a long while since we could get together. Our last meet was masked & outdoors but it was great to see people again!
T

I have no place for the tanks inside. Even if I did, I want fewer than the 20 I have inside. I need likely to be selling a few (2.+) 100 of fish. I would like to sell most of the summer tanks as well. I need to sell a couple of my breeding groups. "Time is not on my side, no it isn't." (apologies to Jerry Ragovoy.)

The plan is to have between one and no tanks before the end of March of 2024.
Expand signature
'Everyone is entitled to his own opinion, but not to his own facts." Daniel Patrick Moynihan
"The good thing about science is that it’s true whether or not you believe in it." Neil DeGrasse Tyson
"How do you make a cycle go faster? Pedal harder." A. Nonny Mouze
F

It's the fish you need to sell, the tanks can wait out in your yard or porch, that's not where the $$ are...you know that. So what's the word on shipping reliability? That, to me, seems the biggest hitch right now...but getting better now?

Just my random thoughts before my bedtime...
T

FedEx, as always. is the best option. but i do not have an account. Further, to ship fish one also need to pass their box/packing test. However, there other options. UPS is a PITA but not as bad as FedEx. UPS required one drop fish at a limited number of specified locations. Yhe there are service like this https://shipy...h it. Knowing temps along the way also helps.
Expand signature
'Everyone is entitled to his own opinion, but not to his own facts." Daniel Patrick Moynihan
"The good thing about science is that it’s true whether or not you believe in it." Neil DeGrasse Tyson
"How do you make a cycle go faster? Pedal harder." A. Nonny Mouze
T

One a break from breaking down tanks, sorting fish and moving them. I pulled apart the Budrovcan L236 breeding tank today. The adults are big and 3 males in caves got parked. The females are fat. I will put the tank back together with the adult fish shortly.

Yesterday I did the Bud grow 236 tank here are the final tallies on the Budrovcan line L236:


Yesterday I did the first of 4 tanks holding true F1 offspring of L173. A 33L with 23 fish all in the 1.75 to 2.25 inch range. They are now in terrace tanks.
40B- 15 fish I describe as top grade- likey to show the zig zag patter when when mature.)
20L under the above- 8 fish I describe as unusual- I am not sure how they will turn out but they all have neat looking patterning now.

I have 2 more grow tanks and the breeder tank for the F1 L173 offspring to pull apart and rehome offspring..

I am trying to get pics of things about to be available for sale. It will take some time to edit them all and many more to come.
Expand signature
'Everyone is entitled to his own opinion, but not to his own facts." Daniel Patrick Moynihan
"The good thing about science is that it’s true whether or not you believe in it." Neil DeGrasse Tyson
"How do you make a cycle go faster? Pedal harder." A. Nonny Mouze
F

Well, you have been busy My back is having sympathy pain for yours.
T

Yesterday nat have been a bit of a letdown ib terms of there being 23 fish. How much depends on my bad memory. Either 25 or 30 fish went in, s depending on which it was I am happy or a tad ticked at myself.

I am having a late lunch at 5:30 and am posting while I eat. I lowered the water int he 40B and then divided the tank. I broke down the left side of the tank, I have already pulled 13 fish from 2.5 to 3+ inches. There must be 15 -20 more s,a;;er sized. None looks to be under about 1.75. I will begin pulling them next and shooting pics of then about 6 -8 at a time. However, they will be regrouped together in one of two halves of the 33L which was emptied yesterday. I will try to group by appearance more than size.

Then it is on to the right half of the tank. I have no idea what will be there. Over 60 fish went into the tank a year or more ago.

I will stop with this tank today. I want to try and work on pics tonight and maybe post some. But who knows. To quote Little Feat, "And you know that you are over the hill when your mind makes a promise that your body can't fill."
Expand signature
'Everyone is entitled to his own opinion, but not to his own facts." Daniel Patrick Moynihan
"The good thing about science is that it’s true whether or not you believe in it." Neil DeGrasse Tyson
"How do you make a cycle go faster? Pedal harder." A. Nonny Mouze
F

5:30 counts as early dinner at my house, lol. I'm almost ready to light the grill now!

Good luck on the fry count, there's almost always a bit of attrition even with the best of care.
T

50 fish pulled, then add 1 I found in the Rubbermaid after I returned the tank contents to the tank. I am not real happy about the number as it means 10 fry did not make it. That is 16% loss. On the other hand the fish turned out better than I expected.

173 is a really unusual Hypancistrus. If you see a single spawn of fry you would swear they were from differnet species and would not be able to identify which species. A year later things would not be a whole lot better. Some might show indications of the zig zag pattern that is so desirable. From there some will, but the best indication that this is where they are headed is when they start to look like zebras. However, if one knows zebras, they will say they are not zebras but are pretty close. from there the stripes morph into zig zags. This happens when they are old/big enough to spawn.

I was very lucky to come by the breeding group I have. They are 10 fish which I have good reason to believe are wild caught. When they arrived 9 had the classic zig zag but the 10th looked more like an L236. I was going to return it. But by the time I was ready to do so when I went to pull it, I could not find it. I had 10 fish all zig zag. That fish had morphed.

Earlier, I had also acquired a group of 14 tank bred l173 at about 1.75 inches. I do not know the source but based on shipping labels left on the box, they came from Germany. The parents were not wild fish. None of these showed the zig zag pattern when they arrived. They do today. I have watched them grow. I have reason to believe the parents of these fish were originally sent to a German breeder by the same person who sent me the 10 wilds.

The wild fish began to spawn for me long before the TR group. So I now had adult fish I had seen, I had 1.75 inch fish I had grown to spawning size, and then I got F1 fry I watched from birth until today. They are now likely the six fish group I pulled today have segregated. If not all of them are in this group, they are the biggest fish in second group of 7 I pulled and segregated.

I am really quite please with the quality of the fish I pulled today. it is better than I had expected. There were only a couple that did not look like they are headed towards or are already showing the zig zag pattern. Then there are a bunch that look really nice but may or may not morph into the lightning bolt striping.

The good news is I got pictures of them all (except the one in the Rubbermaid). I shot them in groups of 5 or 6 fish. I took a bunch of shots of every group- from 8 to 16 pics i think. I am dreading editing and uploading them. But there is no way folks will buy these guys at the going prices without seeing the exact fish they will receive. I will be selling a lot of mine for below market rates. However, I will not do so at prices which would allow folks to just flip them for profit. I want whomever gets them to want to spawn them down the road or to at least keep them longer term.

This is the culmination of an adventure that began about 21 years ago. When I began I swore I would never own any of those ugly looking sucker mouthed fish that I would see stuck to the glass, rocks etc. I never imagined that some of the most strikiing looking fish would be B&W instead of bright lovely colors until I received my first zebras.
Expand signature
'Everyone is entitled to his own opinion, but not to his own facts." Daniel Patrick Moynihan
"The good thing about science is that it’s true whether or not you believe in it." Neil DeGrasse Tyson
"How do you make a cycle go faster? Pedal harder." A. Nonny Mouze
T

I promised some pics. I shot mostly individual fish in sub-groups of 5 - 12 fish. I am a poor photographer and I 0make it for it by doing quantiy and then massive editting. When I broke down the 40 long I divided it first. This makes it easier to nab fish. I snapped a few pics of the first half. These are some F1 L173. Most are in the process of morphing into the zig zag pattern. They are all from one of three fathers and an unknown number of mothers. My best guess would be 2. All of the parents have the zig zag pattern and there are 10 fish in the breeding group.
{click on the pic to enlarge} 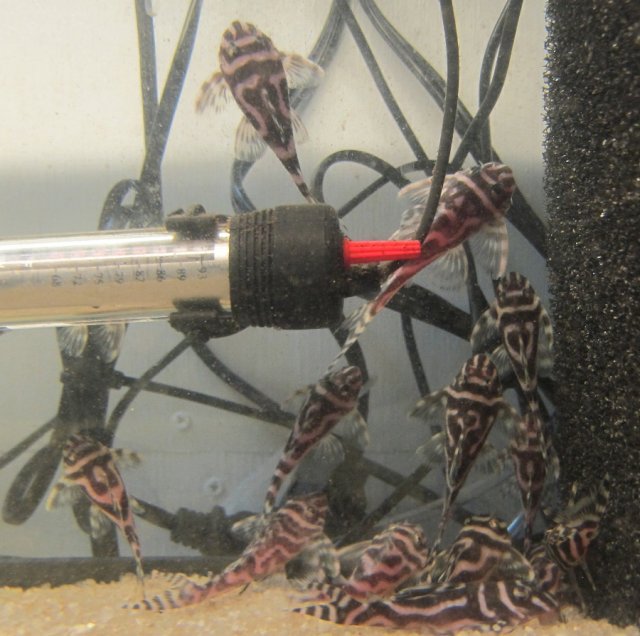 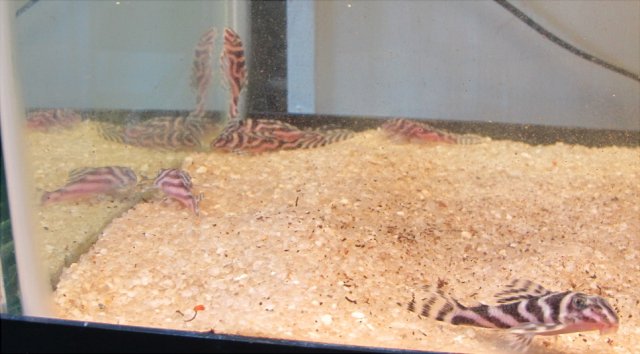 Expand signature
'Everyone is entitled to his own opinion, but not to his own facts." Daniel Patrick Moynihan
"The good thing about science is that it’s true whether or not you believe in it." Neil DeGrasse Tyson
"How do you make a cycle go faster? Pedal harder." A. Nonny Mouze
You must log in or register to reply here.
Share:
Facebook Twitter Reddit Pinterest Tumblr WhatsApp Email Link
Top Bottom