I put them into the right half of a 33L with Budrovcan 236 fry. I got lucky with this mistake unlike the last time I made one similar. The 19 L236 in that tank are all tiny- about .5 inches. The 4 L173 are all much larger (about 1 in.) and will be easy to find and remove. But it will require breaking down that half of the tank completely. I can wait a bit to do this but not too long because the 236 grow faster.

Young 236 and 173 can be impossible to tell apart. If it weren't for the size difference here I would be way be up a creek without a paddle. Back in 2016 I brought L450s and L236 as a room seller at CatCon. I was exhausted by the time I arrived and got it all up to my room and I still had about 8 tanks to set up and fish to unbag. I was almost done when I mistakenly dumped the bag of 450s into the tank with the 236s. I was almost lost until I remembered that two of the best catfish people I know were down the hall. Barbie F and Dale E. rescued me. Barbie came down to my room where we put all the fish into a plastic shoe box and took then back to her room. She and Dale then sorted out about 30 fish in a matter of minutes. i would have needed hours and still have made mistakes.

I am normally very good about not allowing species to mix. In fact all my pleco tanks hold only one species of pleco and a few also have snails. I keep no other fish with them. In 15 years this was my second slip.

Golly, you were lucky twice! Bad things can happened when you're exhausted.
T

I am in the process of breaking down the Wc 173 breeder tank to pull offspring. Step one was to pull the cube filter and a bit if sane and divide the tank. All my 2 or 2.5 inch wide foams are in use so I had to use a 3 inch. While putting it in place a newly free swimming fry passed by. Just what I need, more babies. Before I will pull apart a breeder tank I always do a cave check. And of course there was a dad on brand new eggs.

I used to think I was so lucky to get so many spawns from so many pleco tanks. But this is getting stupid. This is also one big reason I have losses in grow tanks. The process of collecting offspring is a lot of works and it disturbs the group. I have to pull that cave with the dad and the eggs or the process of breaking down the tank will cause some number of the other fish to seek shelter in any cave there is. Normally, I will try to dump any males out of caves when doing this, but not if one is on eggs or wigglers. Then I net the cave and pull it to a hang on circulating trap.

O.K. it's back to work. I am dreading how many offspring I could be about to find.
Expand signature
Vlad the Butcher.
Killer of women, children and old men.
T

The count is in:

Now I have to find a place to put those 66 fish.

Aww, it's hard to feel too sorry for all your breeding successes & fry. But I do understand your overwhelming work load right now. Covid & lack of selling ability this last year or so has hit you hard...but soon it will be better, we both hope so.

Good luck my friend, you're getting a good grip on all the fry & tank sorting, almost there!
T

I have to revise the total. When I was putting the second half of the tank back together I spotted one fry in the tank and in the Rubbermaid was another as well as a 2 inch fish. I just put the two back into the tank, But the total is now 69 for today and 185 total F1 173. I would not be surprised if a couple of more tiny fry did not stay hidden in the wood.
Expand signature
Vlad the Butcher.
Killer of women, children and old men.
F

Wow! There's no end to your finding fry!
T

I managed to get those 4 L173 out of the 226 tank. It was getting crazy trying to keep track of where everything came from and then to where it went. This thread helped me iron out any issues yesterday. On today's schedule is breaking down the right half of the 125 and getting a head count of the TR L236s there. I put 13 in over a years ago. I pretty much never see them. I have caves with fish in them but no signs of spawning.

I am considering selling on AquaBid.

I was just recalling how my involvement with the B&W Hypans originated. It was my desire to acquire zebras. this is before I was breeding anything, However, some of my fish didn't need my help or encouraging. I was offerd the chance to buy a pair of adult zebras, two L66 and two wild caught P. Compta. The result was my Yipes Stripes Pleco tank. Not long after I added two L333. Thos tank taught me a few things, most importantly was zebras do not do well with other species in smaller tanks. I When the opportunity came to buy the proven breeding group of zebras, I needed to move out all the other fish in the tank. The 66, 33 and P. compta went out and the 2 of 3 replacement zebras i had added and that remained were parked in a discus tank. I hated to lose the P. comptas as they were really pretty. 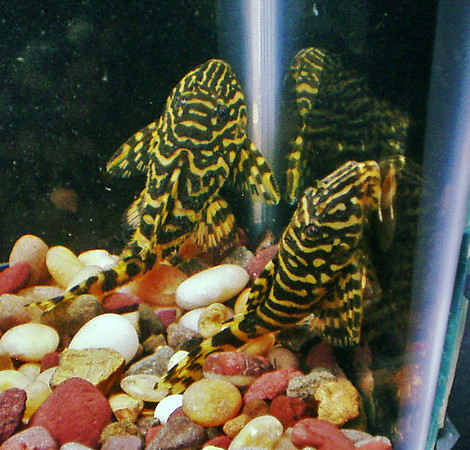 Those P. compta are very pretty! I think if you'd have called them L134 or leopard frog plecos I would have known them. A pleco by any other name...I think they're less "hiding" than some? Or am I thinking of another species?

I'm glad you moved out the L173s before it was hard to tell or an accident happened. I've never tried dividing a tank, what do you use? Poret or a purchased screen type? I'm a klutz, if it's possible to bump them out of position I probably would
You must log in or register to reply here.
Share:
Facebook Twitter Reddit Pinterest Tumblr WhatsApp Email Link
Top Bottom