Hi everyone I have had my tank for about two months now. It is a 30 litre big one with a bubbler, heater and filter. We keep the tank at about 24°C.

Inside, we have 6 neon tetras, 3 cherry shrimp and one bamboo shrimp.

We ordered the bamboo shrimp online and he came in a bag and had seemingly molted in the bag. We acclimatised him to the tank and then for the first week he was zooming around having a good time and filter feeding and enjoying the bubbler.

Now, he has been for almost a week laying on the floor, sometimes on his side or back. He hardly moves, only his legs twitch or front bits twitch. Everytime we have tried to move him back to his favourite spots he doesn't even grip on just let's himself fall. He sometimes kicks his back legs and it looks like he is trying to move but either doesn't move or just falls over. I have attached a photo as now he has developed a curved back

We have tried to feed him spirulina powder for more calcium in the water and done water tests for ammonia, nitrates NO2 and NO3. They have all come back at 0ppm. PH is at 7.0-7.5. KH and GH are normal.

Everything else in the tank is fine and acts/feeds as normal.

What is wrong with him? Can he be saved? 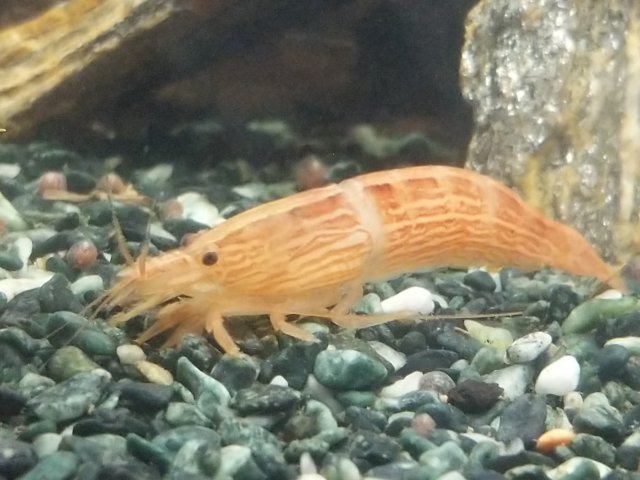 **Please give test numbers for ammonia, nitrite and nitrate**
** (We cant help without those provided)**

Is the tank cycled? For how long?
Due to you issues with your shrimp yes, i am guessing on your water quality *BUT* there is a white ring on your shrimp suggesting molting problem or your shrimp will molt.
I would keep water temperature on 25 C.

KH and GH *are normal* is not gonna help us. Please provide those numbers.

is the shrimp feeding now at all?
Expand signature
Tank Journal:

Sounds like trouble molting. You can see the ring at the back middle there, unfortunately there isn't a whole lot you can do about failed molts
Either wait for him to get out of his shell on his own or hes not gonna get out and won't make it unfortunately.

If some of the shell seems a little bit loose at all, you can attempt to verrryyyyy carefully help remove it with tweezers, ive had to do it as a last resort with a ghost shrimp and the shrimp survived.
But its really risky, as the shrimp's body under the shell is extremely soft and delicate. So I only suggest this method if the shell is part way loose.

Otherwise, not a whole lot you can do about it sadly. It's bad luck mostly unless all of your shrimp have the same problem--then its time to look at your pH, GH and KH for shrimp problems.
Reactions: Wyomingite

NoodleCats said:
Sounds like trouble molting. You can see the ring at the back middle there, unfortunately there isn't a whole lot you can do about failed molts
Either wait for him to get out of his shell on his own or hes not gonna get out and won't make it unfortunately.
Click to expand...

So i said so
Expand signature
Tank Journal: