What the heck is this thing? :help: I bought it as an unknown polyp, for about ten bucks, and it has gotten huge, compared to it's original size, and just keeps growing. I glued it to a piece of live rock, and it has, at least, quintupled in size. I thought it might be an anemone, at first, but it has never wandered, and the new polyps seem to be attached to the first, still. I would love to buy more of these things, since I started a 120 gallon tank, and it would be hard to frag this sucker. I feed it mysis, dried plankton, pieces of silverside, and any other meaty foods I have on hand, and it gobbles it all up, and then, after a month or two, it starts a new fold/polyp. I feed it, at least, once a week, and it shrinks, a little, the next day, but swells up further the day after that. I have it high up in the tank, in a 6 bulb T5HO, 75 gallon tank. It seems to love it there. Any clue? Thanks, a million! 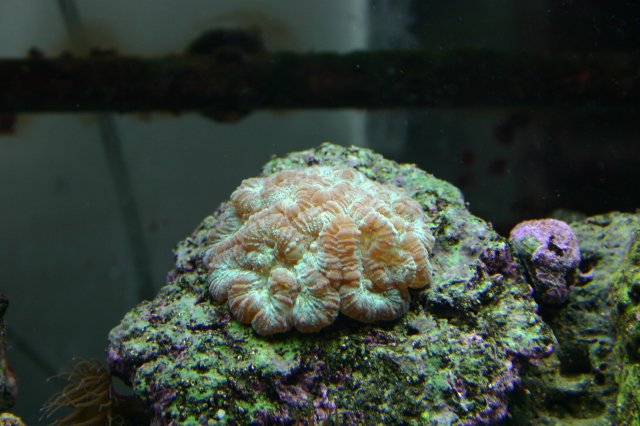 Oh, and sizewise, that's a standard sized, adult margarita snail, next to it.

Many possibilities. Can you get it to close up and get another good pic that more clearly shows the skeletal structure?
Expand signature
Democracy is two wolves and a lamb voting on what to eat for lunch.
Liberty is a well-armed lamb denying enforcement of the vote.

Sorry, for the delay. With the holiday, and now, my computer crashing, it's been a long week. I opened an e-mail, thinking it was a message from marineland(bought a maxi-jet 1200, from petsaolutions.com, and it didn't have the water mover impeller inside, and petsolutions.com said they'd contact marineland to send me the part, and I still haven't heard anything, and it's been a month or two. I need to contact petsolutions.com, again.), and it exploded into all these websites, and it has caused me problems, ever since. Anyway. . . that's part of my problem. I don't know that there is a "skeleton". I glued as a small polyp, smaller than a dime, and it seemed to be a zoa or a small anemone. It doesn't retract, to show any kind of skeleton, and I thought lobo, too, but it seems to be three to five seperate polyps, just with walls close to each other. It was one, then split, then split, and so on, and the walls of each polyp seemed to wrap around the others, to create the lobo type shape. I can't take a picture, tonight. I'm on my fathers computer, it's his camera, and he's not home, at the moment. I think it would be pointless, anyway. I'm not an expert photographer, and have trouble getting that close with his camera(my fault, not the camera's). Would a lobo. start out that small? It's grown a lot, and it's even bigger, now, than in the piture I took, a week ago! Thanks.
F

After looking at all the lobo. pictures, I think it might be one. I didn't know there were so many different species of lobo. out there! Thanks, for the link, Ace25. Love your 75 gallon thread. I re-read it, hoping to get some free frags, when I switched over to salt, to see your tank had crashed. Sorry, to hear it(and not for purely selfish reasons. I haven't seen this coral retract, because I have led moonlights, so, it stays pretty swelled up, at night. Anyway, if those are all lobos., I'd like to get some more. Some of those are pretty cool looking, and the way mine grows is awesome!
C

I'll look up Wellsophyllia's, and get back on here. You can't really see the feeder tentacles, in this picture, but they rim the inner circle of the outside ridge. The tentacles have cool colors in them, like the reddish rim. Very short, and pointed. Still can't get the camera, and my computer is now, not responding to my commands. Need to get my computer savvy dad to look at it. Anyway, I'm thinking it's a lobophyllia, but I'll check those Wellso's out, too. Thanks.
F

Well, after googling wellsophyllia pictures, I've decided it's not one. The wellsophyllia genus seems to be dominated by single polyp animals. What I have is several polyps, and not one single one. Plus, it seems that the polyp is more substantial, and not as "inflated". I'm hoping, that my single polyp turns into a lot more, and comes out, over the edge of the rock it's on, so, that it can be fragged easier. At the moment, it'd be similar to scraping up a semi-cooked pancake. I'd just ruin it. Any other guesses? That was helpful, for me, to look up those two, because I haven't researched a ton of different coral genuses, as wholes. I tend to look them up on sale sites, and then check them out on here, and several other sites, that have species ident. forums. Can't afford to get a lot of books, so, I read Coral, Tropical fish hobbyist, Aquarium fish magazines, and research a lot online. Any good websites I should check out, that have accurate info.? I've checked out a few that were terrible, and a few that seemed to match what I'd read, elsewhere.
You must log in or register to reply here.
Share:
Facebook Twitter Reddit Pinterest Tumblr WhatsApp Email Link
Top Bottom