Just wondering if anything else looks like ick. My little gourami just doesn't look quite right. He is getting some little holes in his tail which I know is not ick, but on his sides, it looks like there might be ick, but its not really white and obvious, it is very hard to see, but appears to be slightly textured, and sort of yellowish or off whiteish - the color of him which is why its hard to see. Any ideas?

thanks.
Expand signature
Hopelessly New!
10 GAL:2 Napoensis Cories (one with only one eye)
37 GAL:1 Ropefish, 6 Otos

Look up Velvet and see if that matches what you see on your fish. Also answer the questions above so we can further help you.
Expand signature
Dealing with ammonia or nitrite click the link below to read up on the cause and cure of this common problem.

Ich lools like the fish was sprinkled with course salt
Expand signature
Don't Meddle in the Affairs of Dragons...because to them...you are Crunchy and taste good with Ketchup.

that's Yukio in my avatar
R

Here is a picture of ich that I cleared up with salt. The fish is a white skirt tetra which happens to be highly sensitive to meds. From your description, tiny yellowish specks I can make the assumption that your fish has velvet but I need more information to make an accurate diagnosis. 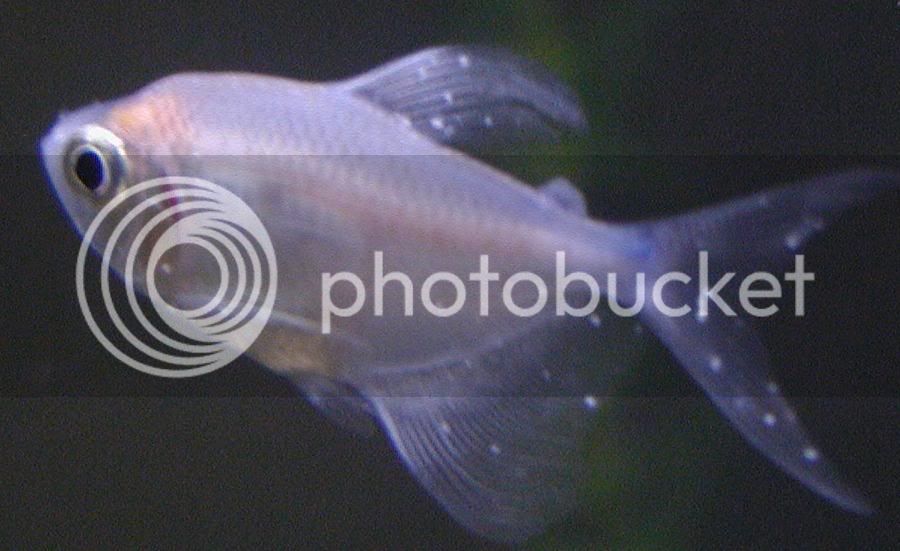 Expand signature
Dealing with ammonia or nitrite click the link below to read up on the cause and cure of this common problem.

My water peramaters are good.
So I am currently treating for velvet. Hope that does the trick!
Expand signature
Hopelessly New!
10 GAL:2 Napoensis Cories (one with only one eye)
37 GAL:1 Ropefish, 6 Otos

The best treatment for velvet would probably be a malachite green + formalin medication or anything with copper (though I would not reccomend that).
Expand signature
Dealing with ammonia or nitrite click the link below to read up on the cause and cure of this common problem.

well, there has been no improvement, I am treating with Noxich which claims to get rid of ich and velvet. The fish is looking worse and showing a lot of tattering on the fins too. But I noticed Nozich does not have any copper in it, but it is what I had on hand. I also only use half a dose because my fish store did not know how my rope fish would tolerate the med. And I forgot to say that I have not added fish since proably Dec. I need to update my signature because it is all wrong now. The problem is in my 37 gallon tank which I started with a fishless cycle and added a full load in Nov - 1 opaline gourami, 2 dwarf gourami, 1 rope fish, and one snail. With in a week one dwarf showed signs of ick. So I bought the medicine, but the fish died the next day. In order to rid the tank of ick, I treated with heat and salt. I lost the snail. I was feeling very depressed about the tank. Then some time after the heat/salt treatment, I added 5 otos to take care of the algea - all appear healthy and active. Then the opaline got some kind of problem in its gill and died. Now the remaining dwarf has this stuff that maybe is ick or maybe is velevet, but what ever it is he is looking worse. The rope fish appears healthy although he has a couple of dark spots on his tail that I am not sure if they are his natural markings or yet another problem.
Expand signature
Hopelessly New!
10 GAL:2 Napoensis Cories (one with only one eye)
37 GAL:1 Ropefish, 6 Otos

Trust me, it's for your own good.

We still need water parameters and water change routine to guide you. Velvet is commonly caused by low temp, stress (caused by transportation), or poor water quality.
Expand signature
"In matters of principals, stand like a rock; in matters of taste, swim with the current."

Fell free to PM me with questions about your glass boxes, the critters that live in them, and your current crisis concerning them.

The temp is about 80/81*
I change/vac about every week or two anywhere from 10 to 45%
I will test the water and report back, but typically I get the same readings everytime (which I do when I change the water) and they are