Goldfish not eating, clearly sick with no other symptoms.

Hello all,
My family and I have been viewing posts on this site via google searches trying to diagnose our very sick little goldfish.
Nothing is working and no one seems to have this problem as of yet so I decided to create my own username and post myself on here.

Our little Beamish has been sick for quite some time.... He is a white Oranda. Over a period of two weeks he has been refusing to eat his food and has been floating head-down in the tank.
He shows no signs of distress. His scales are shiny and all of his fins are perfectly in tact. The only other symptoms he has are his small clear-cloudy strands of poo he has from time to time.
He has had small problems with his swim bladder from time to time, but we fed him peas and he would perk back up immediately.
We first treated him with Myracin Two thinking it might be bacterial but to no avail. We then tried Myracin one which also did not help.
We then tried a general parasite remedy from API thinking it was an internal parasite but still nothing has changed.

He has no signs of bloating, he is not gasping for air nor are his gills moving rapidly. he just seems to rest at the bottom and breath slowly and quietly.
There are three other goldfish in the tank, but they all get along very well. In fact, one of them comes and goes to lay with him from time to time.
When it is feeding time he swims about the tank with the other fish, but when flakes, pellets, or peas fall by him he either ignores them or spits them out if he catches one.

This has been going on for almost two weeks now and we are baffled. How long can a goldfish go without eating??? Can anyone figure out what is wrong with my poor goldfish.

I feel bad for the little guy but for the life of me I cannot figure out what is wrong ):

As for the tank itself, it is a 60 gallon tank that is cleaned with 30% water changes weekly. All water parameters are in normal range. two fluval filters are also attached, there is a bubbler and some fresh plants on one side that they tend to sleep under at night. 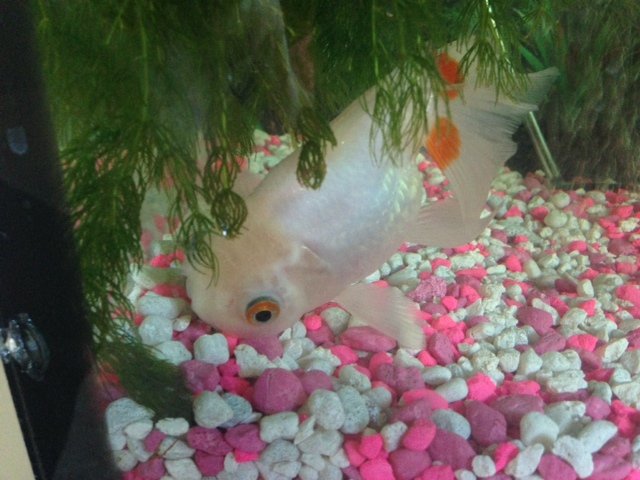 Clear cloudy strands of poo? Sounds like an intestinal parasite of some sort. Any new additions to the tank? Tank size? Ammonia, nitrite, nitrate? Temperature?
So much to learn, so much to teach...

Fish can go for a very long time without eating.

I agree, sounds like an internal parasite, although 'clear poo' is a symptom of not eating as well. I'd try some garlic soaked food, and the offer an anti-parasitic treated food.
D

Hi. Did you ever figure out what was wrong with your goldfish? I came across your post on google and I am having the exact same problem with my goldfish. Same symptoms. Not eating, floating about. No physical problems. I thought she was constipated so didn't feed her anything for a few days. The tried some frozen peas (which she loves) and she just ignored them. I have also treated her with API general cure for parasites, thinking it was a parasite infection, but she hasn't changed. She's been like this for 2 weeks. Any help would be greatly appreciated. I'm panicking as I don't know what to do for her.