This one is AMAZING!! Never seen a clown like it. Hopefully it will successfully breed and we will have some in the trade.

Wow that is cool!! I'm not much of a fan of maroon clowns either but I definitly wouldn't mind that in my tank lol!
Expand signature
29 Gallon SW FOWLR+ some reef!-- 1st SW tank:dance:

THAT IS AWESOME! I definitely am getting one when they come out for sale worldwide.
Expand signature
Thousands of candles can be lighted from a single candle, and the life of the candle will not be shortened.​
Happiness never decreases by being shared. - Budda
​

HOLY **** Thats a lot o $$$! I think ill wait till they can easily breed them and the price goes down a little.
Expand signature
Thousands of candles can be lighted from a single candle, and the life of the candle will not be shortened.​
Happiness never decreases by being shared. - Budda
​

There are several factors that went into the final price.. and the collector/exporter made sure it went to the proper "home" vs the person with the most $. They could have easily gotten $5000 for it but they chose to sell it to the person with the best chance of successfully breeding it. This isn't the only lightning maroon that has been collected either. From what I have read they have collected about half a dozen so far and say there are more on the reef they came from, but it still isn't common to find them. A lot of different discussions have gone on about this fish, from how they got the markings (environmental, genetic, diet, etc), to is it a sustainable pattern that can be bred. Only time and care will be able to answer the sustainability question... but this is exactly how ORA bred their naked and picasso clowns. The pattern seems to be a genetic trait and not an environmental or dietary trait from what I have read.

I am more excited just to see if it is possible to tank breed it. Even if the price was reasonable on them I still don't think it is a fish I would buy (since it is still a maroon clown and probably has all the normal maroon clown traits).

Hindsight is a wonderful thing!

That is one amazing looking fish
Expand signature

Hello. Ret Talbot here. I am a writer and photographer who frequently covers the marine aquarium hobby. I was fortunate to be in Papua New Guinea researching a story on the SEASMART Program when this PNG lightning maroon clownfish was collected. I have subsequently been following this fish very closely since it arrived in the States (the day after I did!). I thought I might add a few things here and provide some links in case people are interested in more of the backstory.

In terms of where the fish originated, it is one of two fishes with this same variant that have been collected from the same reef in Papua New Guinea. The first was collected in 2008 and the second is the one I photographed in March of 2010. There was a third collection reported on ReefBuilders on 1 April. Let me repeat that: published on 1 April. A good gag and some nice Photoshop work, but not a third PNG lightning maroon clownfish. There have been other variants collected on this reef, but no other "true" lightning maroons to my knowledge have entered the North American trade. Having said that, anecdotally there are more on this reef.

Regarding the price, the retailer who handled the retail sale (Pacific Aqua Farms was the wholesaler), bids well in excess of $5000 were received, but, as indicated above, Blue Zoo decided to get the fish into the hands of a reputable breeder. ReefBuilders published the price at $2500, which was the price that showed up on the Blue Zoo Aquatics Collector's Choice page briefly, but the actual sale price has not to my knowledge been revealed. The breeder who is now caring for the fish, Matt Pedersen, sold off a bunch of fishes to fund the purchase. You can follow Matt's progress here:

I think it's also important to give kudos to the SEASMART Program, as they ensured that the collector was fairly compensated for the collection. What we may call "fair trade" is central to the SEASMART model, as is a commitment to both environmental and economic sustainability.

You can learn more about this fish's backstory by reading the length article published by Blue Zoo Aquatics. It is here:

There is a shorter article published on the SEASMART website (with a few more pictures of the fish):

Finally, for more background on SEASMART and PNG, you can check out my blog from the trip here:

...and here is one more picture I snapped of the lil guy. 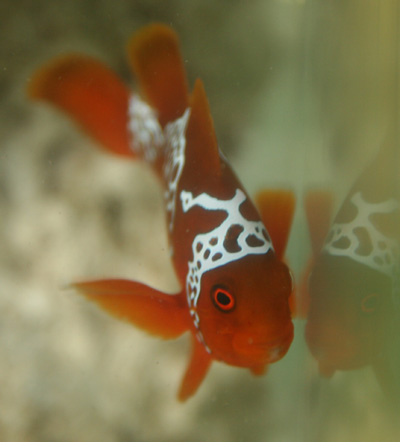 Truly a sad day when the "experts" don't have the ability to keep a maroon clown alive.