Invert PEST!! What to do? 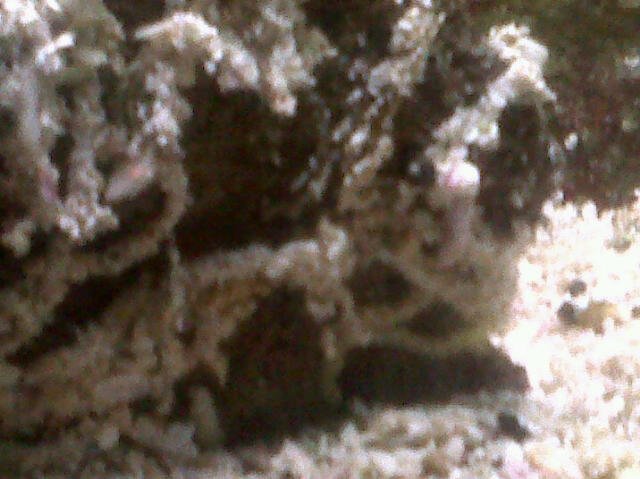 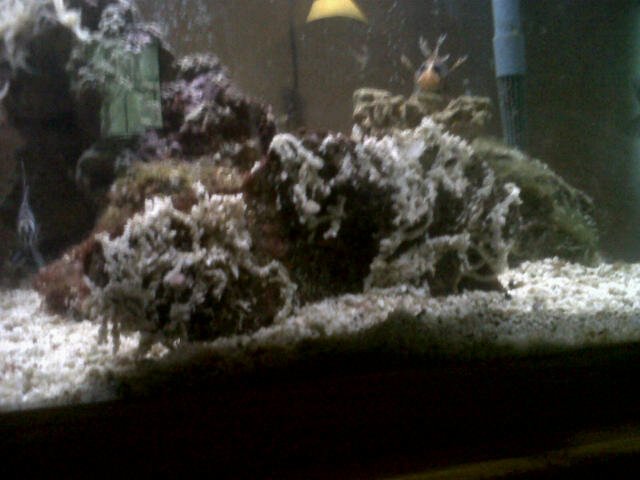 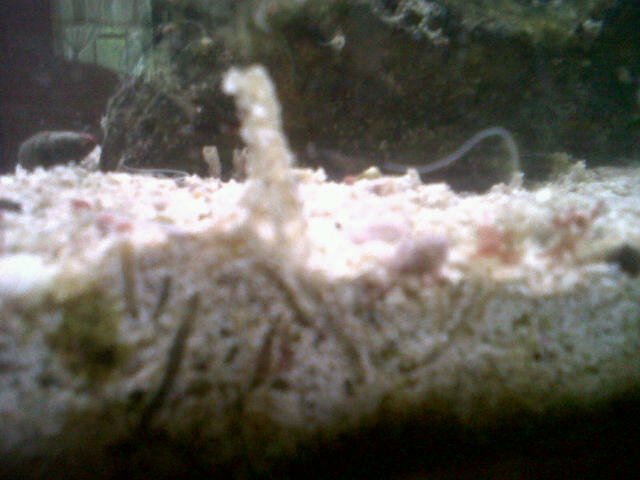 Hey Greech! You are right...chaetopterid....I found clear pic online... I posted pics that were just WAY to large for you to see anything clearly.
1st pic above is bottom of a piece of rock about 9 in long,(the far right 1/3 of the 2nd pic) I think the extensive spread of the 'tubes' is clear.
The 3rd pic is zoomed way in to the lower front rt corner of the aquarium. The lines below the sand surface are the worms themselves. In the center you can see a columnar shape...the worm continues to build it's tube.
The white filamentous structure that looks like a hair protrudes from the end of the tube. I know there are some algae issues and am working toward getting rid of that,but was mostly concerned with the sudden spike in toxicity.
BTW, the nitrates have dropped considerably, just barely above where they need to be. Am being patient as all seems ok.
I am not a very good writer and I believe that fact added to the problem...you also read my posts as a current snapshot of the population. I have 2 denali cardinals, 1 percula clown, 1 dwarf Lion, a couple small blue legged hermits and a feather duster(which I didn't mention earlier) The Rusty Angel and 2 coral beauties were put into the story only in terms of history of the tank. They were never all in there at the same time. My description of the timeline is horrible and I apologize. I also noted that in one post I said I had 20lb sand then later in same post 30 lb. I have 30 lbs. Actually its very course globs now thanks to these wormy guys. Manually removed a bunch of the algae and some hydroids(?) and will get at the cannister tomorrow(I hope!) Currently using Ultra Zorb charcoal product- is ok as opposed to GFO?
So grateful for your patience and help with both the ID and other valuable info. This tank has been chugging along for 3 yrs now and all of a sudden 1.Coral Beauty died, 1week later an relacement coral beauty died then after more water changing and canister cleaaning ,filter material relpacement, the rusty angel died!!! Guess I panicked a bit and not thinking, tried to post billboeard sized pics! Lessons learned!
Thanks again,
Drifty

You're welcome. Glad it is helping. The fishload seems ok. I would leave it alone for a while and don't try and add anymore until you get things under control (and you are confident you can keep it that way).

Not familiar with ultra-zorb but you should be using a good, low-ash carbon along with some GFO. GFO is grannular ferric oxide and is not the same as carbon. GFO binds phosphate. Rowphos and Phosban are two common store bought GFOs but you can get no-name GFO from places like bulkreefsupply.com. It is all comparable material. If you use it, don't overdue it right away. Another product is Chemipure Elite which is carbon and GFO (and supposedly other media that does everything short of curing cancer) in one media bag. This can get a little expensive but it is a good product. While we're on the subject of good+expensive, Poly Filter is another option. This stuff does work very well...

..and might be good to help you get things under control initially and/or polish your water once you do (not a bad idea for a high protein, skimmerless tanks like yours).

Keep up the water changes and don't overfeed though. No media will substitute for this. Might want to manually remove some of the worms (if you can) to help "air out" your sand bed. If its a solid glob of goo, it likely isn't very effective and may be doing more harm that good. Might consider a predator that will feed on the worms but be careful as that solution may result in another problem. If you do decide to do a manual removal or replace some/all of the sand, don't kill the worms and leave them in your tank (another ammonia spike may pop up). Good luck!
Last edited: May 14, 2012
Expand signature
SG = 1.024-6; Alkalinity 8.3-9.3 dKH; Calcium 420; Magnesium 1300; Temp = 76 to 80; pH = 7.9-8.3. Alkalinity and calcium are dependent on Mg.