I thought I would post these guys. I have a thing for any of the rarer B&W Hypancistrus. Does anybody want to take a shot an an ID. They are not zebras nor any morph thereof. 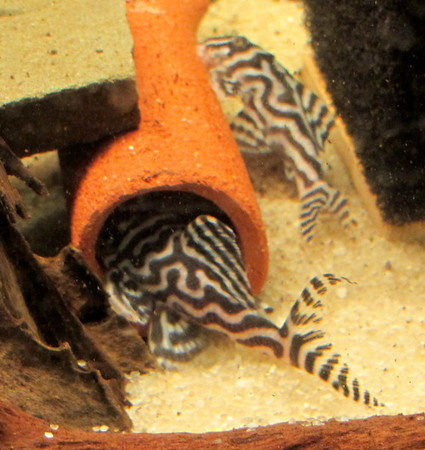 Expand signature
'Everyone is entitled to his own opinion, but not to his own facts." Daniel Patrick Moynihan
"The good thing about science is that it’s true whether or not you believe in it." Neil DeGrasse Tyson
"How do you make a cycle go faster? Pedal harder." A. Nonny Mouze
Reactions: NoodleCats

The Aquarium Catfish Website. Images are copyright and may not be reproduced without permission of the copyright holder.

Lovely pattern on them!
D

Noodles guess looks pretty good. Are they "hiders" like many pretty striped plecs? It looks like maybe not be, by your pic.

I'm sure you probably posted on planetcatfish. Any ideas on where they're from? Are they breeding for you yet? I know you've bred some different plecos over the years.
T

They are indeed L173. Yes, they hide. There is a good story behind them.

I use to deal with a gent who was extremely well connected in S.A. He had export businesses in Peru and Chile in the end. He was able to get pretty much any S.A. fish there is. He also kept fish for himself, but he did not breed anything. I had arranged to get 15 each thank raised L173 and Super White L236. To get them I also had to buy a box of 100 zebra plecos. Since I had been breeding zebras for a number of years, I knew I would be able to sell the 100 zebras, so I did the deal.

There were a number of delays and when the box arrived it had the zebras and 173s, but no super whites. They had been sold to somebody else by his source and we were promised a shot at them again in a few months. My supplier felt guilty about the delay and to missing SWs, and he made me an offer. He had 11 wild caught L173 which he would send me to try and spawn. He would retain ownership of the fish and any babies I could get we would split 50/50. No way I could turn down that offer.

It took me some time plus a conversation with Ingo Seidel and Dale Ernst at CatCon 2016 the result of which was I began feeding a lot more frozen foods as well as Repashy. I have become a big proponent of the Repashy food and credit the Spawn & Grow with my succeeding in getting the 173 spawning. I have documented the whole thing in a thread on Planetcatfish. There is a vid shot by Rachel O'Leary aka msjinkzd of the adults and another of some of the fry. There are also pictures posted on PC.

Apparently, one of my supplier's Japanese customers had been following that thread and he offered my guy $1,500 a fish for the proven breeding group. There were only 10 fish as one was a zebra and I returned it. I told my guy to take the offer as I could not pay that for them. However, my guy said he thought I shlould be the one to end up with them as I had done all the work. Long story short we reached a price which included my forgiving him some make goods he owed me and I ended up owning them. To date I have gotten over 200 offspring from them and they are still actively spawning.

The other group of tank raised 173 I believe came from a breeder in Germany with whom my guy had placed another batch of 173 a couple of years earlier. I still have 10 of the original 14 (I sold 3 as I had the wilds and did not need so many of the tank raised group). The TR group is also actively spawning and I need to figure out how to get a grow tank up as I have a lot of their offspring now.

Finally, I did get a group of real Super white 236. I have 13 growing out and I am hoping they might spawn by Xmas.
Expand signature
'Everyone is entitled to his own opinion, but not to his own facts." Daniel Patrick Moynihan
"The good thing about science is that it’s true whether or not you believe in it." Neil DeGrasse Tyson
"How do you make a cycle go faster? Pedal harder." A. Nonny Mouze
Reactions: NoodleCats
F