Scrubbers will now be sized according to feeding. Nutrients "in" (feeding) must equal nutrients "out" (scrubber growth), no matter how many gallons you have. So...

An example VERTICAL waterfall screen size is 3 X 4 inches = 12 square inches of screen (7.5 X 10 cm = 75 sq cm) with a total of 12 real watts (not equivalent) of fluorescent light for 18 hours a day. If all 12 watts are on one side, it is a 1-sided screen. If 6 watts are on each side, it is a 2-sided screen, but the total is still 12 watts for 18 hours a day. This screen size and wattage should be able to handle the following amounts of daily feeding:

High-wattage technique: Double the wattage, and cut the hours in half (to 9 per day). This will get brown screens to grow green much faster. Thus the example above would be 12 watts on each side, for a total of 24 watts, but for only 9 hours per day. If growth starts to turn YELLOW, then increase the flow, or add iron, or reduce the number of hours. And since the bulbs are operating for 9 hours instead of 18, they will last 6 months instead of 3 months.

HORIZONTAL screens: Multiply the screen size by 4, and the wattage by 1.5

Clean algae off of screen every 7 to 14 days, so that you can see the white screen material.
Expand signature
888-CORAL-REEF
Research Studies
Nutrient Removal Discussion

Updates on the LED test. 3 pics from 2nd cleaning, and 1 vid from 3rd cleaning: 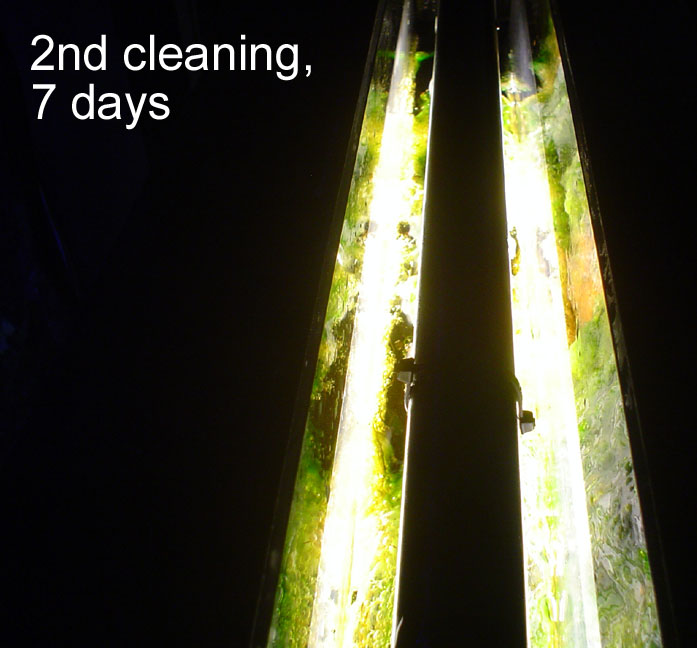 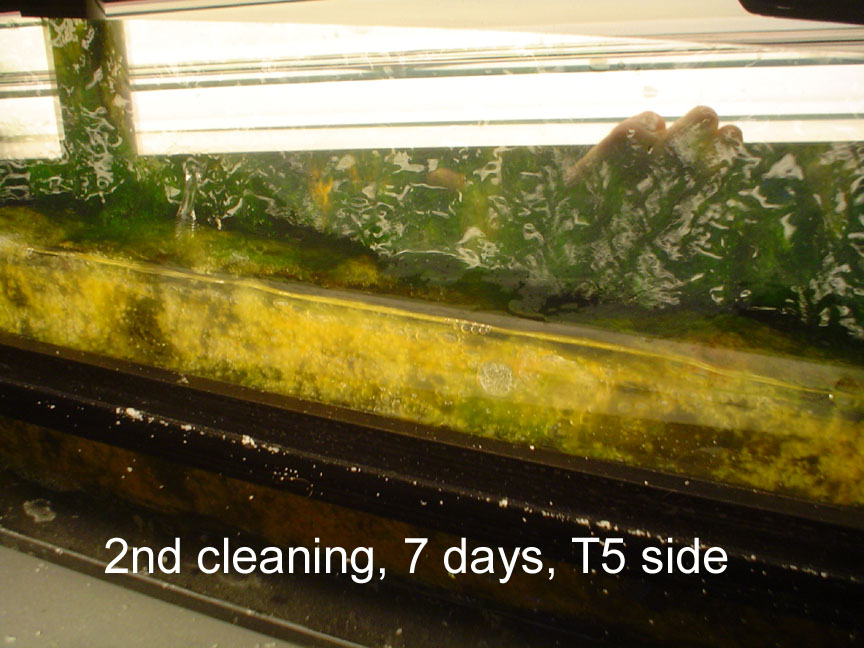 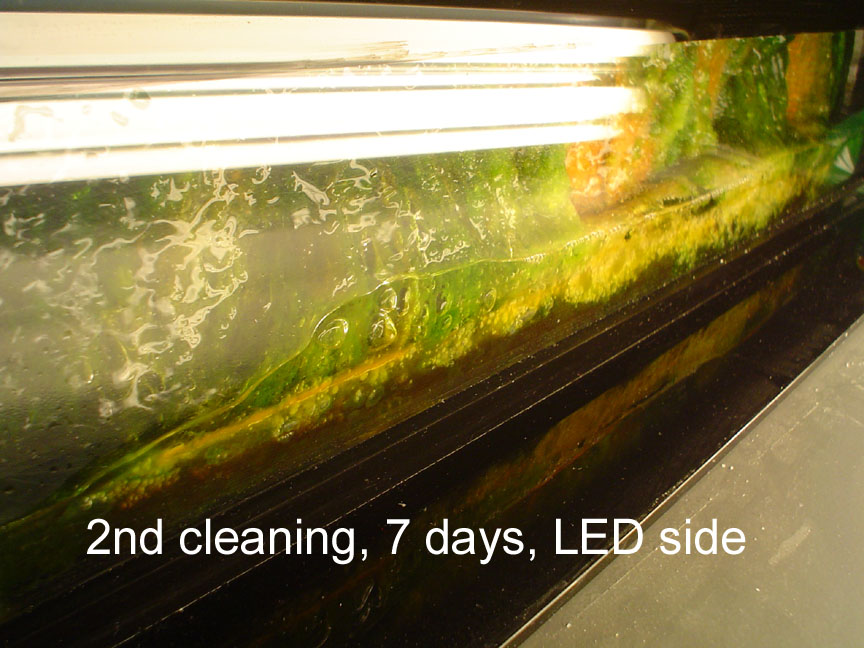 1. The cyano stage: Some people, who start using a scrubber for the first time, get rid of their nuisance algae but then get some cyano that they never had before. The reason for this is that cyano is able to "fix" it's own nitrogen, which means it is good at getting the last nutrients that are available. However, once these last nutrients are removed, the cyano will go away too. And the more powerful the scrubber is, the quicker this happens.

2. High coral-growth theory: Some people are wanting faster growth with their SPS corals. In a scrubber-only tank, when there are no other filters, you have higher amounts of dissolved and particulate food in the water than if you had other filters running. However, the lighting remains the same. In other words, growth requires light and food; a scrubber-only tank has more food, but the same light. My theory is that if you increased the light too, you would get much more growth; possibly more that natural levels.

This is based on watching "traditional" SPS tanks with lighting problems (low light/food ratio): The corals grow slow (if at all), and tend to stay brown. When the lights are fixed/replaced (high light/food ratio), the colors brighten up and the growth starts again. However a scrubber-only SPS tank has much more food in the water, yet still only has "traditional" amounts of lighting. So the light/food ratio is low again. So my theory is that if you increased the lighting to more than "traditional" levels, you would get "more than traditional" SPS growth. Bleaching is less of a concern in a scrubber-only tank, because of the larger quanitity of food that is available (studies have shown that more food reduces bleaching).
Expand signature
888-CORAL-REEF
Research Studies
Nutrient Removal Discussion 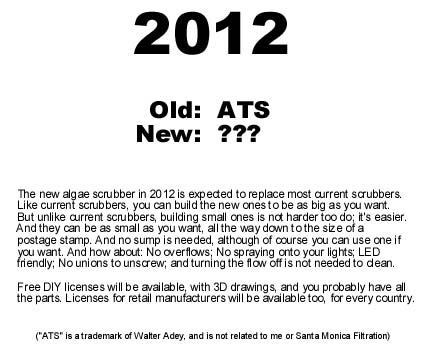 New scrubber update: The new design will not require a slot in the pipe. If you have not built one yet, and you have trouble with DIY, then you might wait for the new DIY plans to be posted; there should be no hard-to-cut pieces (like a slot), at least for the very simple versions.
Expand signature
888-CORAL-REEF
Research Studies
Nutrient Removal Discussion
X

Glad to hear it SM! I eagerly await specs for a no-sump version that would fit on/in a 10g.

Here is a comparison of the types of bulbs to use: 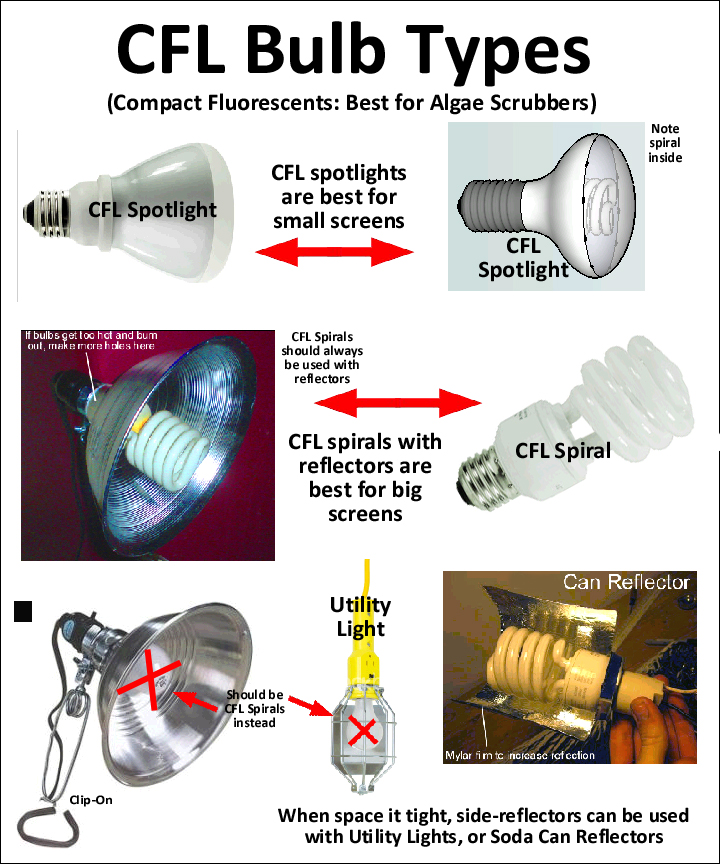 I have Chinese finished, but I need other languages too. So if you or someone you know can translate that page into another language and email it to me on a Word 2000 document, let me know how much $ it would cost.