New Regal/blue/hippo tang not too active

Hi we got a regal/blue/hippo tang five days ago. ( so many names for one fish) Anyway she does not seem to want to do too much, except hide in the rock. She will swim around in a small loop then back to her spot. On the first day she explored a bit, but kept bumping into the glass and rocks.

We have put seaweed in for her, plus brine and mysis. Cant get her interested in any.
Would garlic help, if so how do I do it?
I have a 400l tank with about 20kg of rock.
The other fish ( clowns ,flame hawkfish and a goby) are all doing ok.
So have we just aquired an emo fish that sulks all day?:irked:
J

I am now seeing a few white spots on her dorsal fin.
If this is ich what is the best way to treat it? I cant use copper.

Could it just be from all the moving from ocean to shop to home that brought it on?

They nee some super delicate acclimation if going straight into the tank. Lights out, float the bag for a while, drip acclimate. Tip the bag over and let it come out on its own accord.
Fish are friends; not food.
J 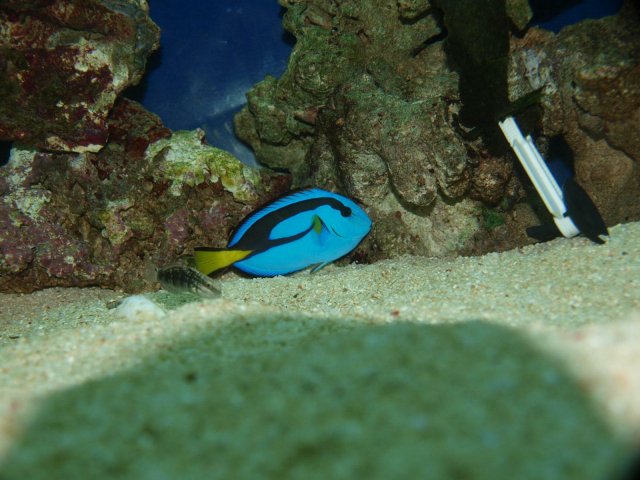 Well, having owned one of these previously I will have to say that this is one of those fish that you should have quarantined first before putting the fish into your tank.
These fish are susceptible to catching ich rather quickly as they stress out if you look at them funny (not really, but that's fairly the idea).
They should be acclimated via drip over a process of 2 hours prior to any introduction to any tank.
As of right now, I have no doubt in my mind that the fish now has ich, what I would recommend is transferring the fish into a quarantine tank. Where the ich will not spread to other livestock in the tank.
If you do not have a quarantine tank, you may want to invest in skunk cleaner shrimp.
However there is a catch to it. The fish if it does not trust the cleaner shrimp, it will not allow the cleaning, which therefore will have ich continue spreading onto the fish and continue breeding in your tank. Not a good thing.
You should do a bit of research on Hyposalinity and ich. As right now is a very important time as too much time wasted will kill the tang.

Hi
Nope still just sitting and sulking.
Everynow and then she swims around and I get excited but then is back to the same spot. My son added more live rock and even then she did not move,even when her rock was moved. He had to pick her up to move her.Then it was back to her rock in a new spot.
He says maybe she is blind?
Re the shrimp, will it be ok with the Flame hakfish?

My new little tang likes something in that, not all but some. Barney is about an inch long, and picks at my hair algae, and then my lawnmower blenny comes out and defends his turf.

The first day, he stayed pretty much to one corner, now moves about rather alot.

I doubt yours is blind, but just feels safe in that spot. I don't really know alot about lighting and how it affects these guys, but I noticed that when I change lights on a fish tank, the fish really freak. So if your little one was removed from the ocean and now in artifical light, it may have something to do with it.

So whether you need more light or less, I don't know. Barney does not move from his sleeping spot until I switch on the t5 ho lights. I have morning indirect sun, but just not enough to wake him up.

Then when lights are on awhile, he will feed. Now the little guy is getting used to me some. Doesn't run off to his safe spot as much.

Again, this is my first little hippo tang, so I am far from experienced tang person. He had signs of ich at the store, I still put him in the DT, I have seen these guys with ich real bad, fight it off. So I am trying that route now.

I had one other tang, it died in Hospital/qt. shortly after purchase. I think it is far more important now to get him acclimated and used to his new surrounding first. Make her comfy maybe partition off so the aggressive ones leave her alone when you are not around, or totally rearrange the tank.

Are the kids tapping the glass?

How old is the tank? The sand looks really clean.

Also do you know the salinity, temp and other water measurements?

Does she breath fast, or faster than the other fish?

Well we have moved her into the Hospital tank now. Gave her a fresh water dip for 8 minutes, and am treating with Octozin for 3 days then just have to lower the sg to .017 for three weeks ( so it says on the bottle)
The main tank has been running for two months now. Just Four clowns one hawkfish and a gobie with crabs and snails. 400l with 4 T5 lights. SG .024 all levels show ok temp at 24C.
Will keep the updates comming
I will look for the cyclopeze stuff

I looked a bit at this octozin, do tell us how that works out. From reading, you may be able to treat a display with it.

From your picture, she doesn't really look in bad shape at all. Hope this works, yet something tells me she is more freaked out than sick. I don't know why. I would lean towards less handling of her, unless of course the meds do the trick.

Below is a pick of my little Barney. (just over an inch big) Skinny, so skinny that the food is showing in his belly as it works through his system. But at almost a week later now and he is eating good, mysis, cyclopeze, hair algae, and now even flake. hope he gains some weight. 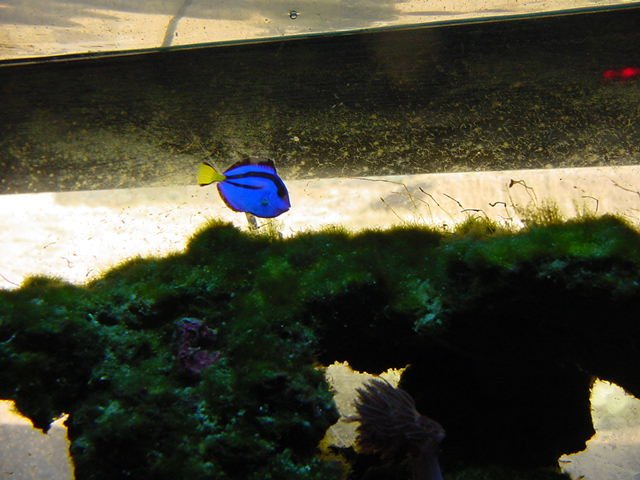 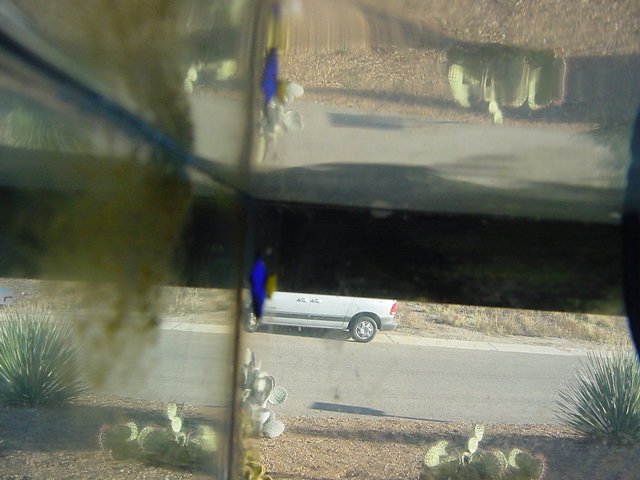