Thanks to those that helped me determine that my yellow tang has septicemia (original thread: http://www.aquariacentral.com/forums/showthread.php?t=139674), but now it potentially has another problem. I think that the Tang had a bad reaction to the maracyn-two that was put in the tank. Here is what happened:

Sunday I purchased Maracyn-two, did a 50% wc in the tangs QT tank and put in two packets per 10 gallons (fist days dosage in directions). Before I did this the tang had the red spots, but could swim fine and was eating. Monday morning it was having trouble swimming, wasn't reactive to me being near the aquarium, and wouldn't eat at all, but the red spots had subsided. Monday afternoon it stayed in its favorite hiding spot and wouldn't come out. By evening it was laying on its side with labored breathing and barely moving. I performed a 40% water change and added carbon as a last effort since I read on Foster Smith that in marine aquariums only 1 packet per 10 gallons was used on the first day, and I had used twice as much. This morning (Tuesday) it was surprisingly still alive, and swimming around the tank again, but still having some balance issues with labored breathing, and still not eating. The red spots are completely gone now, although I haven't put any maracyn-two in since the first two packets on Sunday, so I would assume that the red will come back if I don't go for 5 days straight.

The problem: Why did the tang almost die?

I would think that the wc is not the culprit because I used the same RO water (reads 0 ppm with TDS meter) with the same salt mix as I did to fill the tank up and do the second water change. Would septicemia cause the sudden inability to swim and breathe while appearing to get better (reduction in red spots)? Or did I use too much Maracyn-two?

The only other possibility is that there was a reaction between the penicillin (Gel-tek) soaked food it was given before using the Maracyn-two. Any help in the matter would be greatly appreciated.

I really have no idea but am just throwing this out there for someone who might have a better idea. I have read tangs, more then many other fish, frequently have oxygen exchange difficulty and need very high oxygen contents in their water. Maybe the medication interfered with the O2 concentration in the water? Just a random guess

I also have read on other meds that sensitive fish, like tangs, require half the dosage of any medications I have on hand in case of emergency. Sounds like a fish equivalent of a drugged up or drunk person. But, I have no idea what to suggest. Sorry.
:nilly: I just like this smilie.

I wish I could help you as well, but my tang never did suffer from anything like that when I had her.. She is still doing well in her new sigh.. 125 gallon tank. And in my readings I haven't come across anything similar. In fact you are the first person I've seen post their tang had septicemia. BTW were you ever able to get a good picture of her yourself?
75 Gal : 140 lbs LR ; 120 lbs LS; 5-Turbo Snails; 3-Nassarius; 20-Cerith(and they are making more); 1-Ocellaris; 1-True Percula; 1-Gold Head Sleeper Goby; 4-Pajama Cardinals; 2-Feather Dusters; 1-Coral Beauty Angelfish; 1-Royal Gramma Basslet; 1 - Scooter Blenny; 1 - Bali Red Starfish ;Polyps and GSP; 1 Colt Coral; 1-Mushroom Leather; 1 - Maxima Clam; 1 - Bubble Coral; 1 - Rose Tip Bubble 'Nem; 4 - Peppermint Shrimp

okay. listen. some meds are known for depliting oxygen in the water. also, if the spots are gone and the tang is eating, i would just continue with water changes because septisemia can go away with clean water. feed him well with addition of vitamins or garlic to the food and nori. if he doesn't start eating and has bloted belly, then it would be dropsy and without antibiotic he wouldn't recover, but septisemia can go away with just water changes. just watch him for now and don't treat if he starts eating and spots don't come back. it could have happen that you overdozed him on meds symply because he got another antibiotic internaly and maracyn-two also absorbs through the skin, and both are antibiotics. maybe these two just don't mix. i don't believe that he would get sick from you following the dozes, as long as maracyn-two was for salt water fish. this is one med that i can truelly say can be followed exactly how it states on the package with a tang. so, do water changes, watch him, provide different vitamin inreached diet, if needed retreat with maracyn-two. i wouldn't medicate for now and just watch him
S

BadRoma1 said:
i don't believe that he would get sick from you following the dozes, as long as maracyn-two was for salt water fish.
Click to expand...

Thats what part of the problem was. All I could find locally was the freshwater version which says to use 2 packets on the first day. Here http://www.drsfostersmith.com/product/prod_display.cfm?c=3578+4615+4842&pcatid=4842 it says to use only 1 packet on the first day for marine aquariums. It appears that the only difference between the freshwater and saltwater versions of the medicine is the addition of vitamins to the saltwater one.


BadRoma1 said:
also, if the spots are gone and the tang is eating, i would just continue with water changes because septisemia can go away with clean water.
Click to expand...

The spots are mostly gone with the exception of a hollow red circle above the eye, but the tang is not eating. It is swimming around very slowly though, which is a great improvement from laying on its side in its hiding spot.


clown-lover said:
BTW were you ever able to get a good picture of her yourself?
Click to expand...

It helps that the tang isn't darting all over the place. I can't really get a good picture of the circle above its eyes, but you can kind of see some red in that area in the first picture. 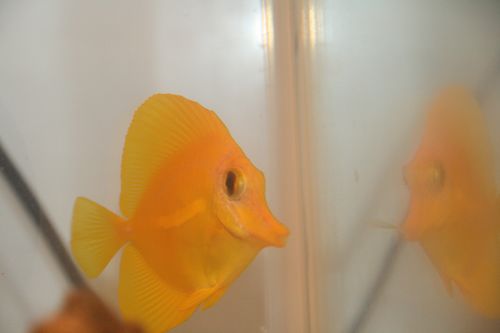 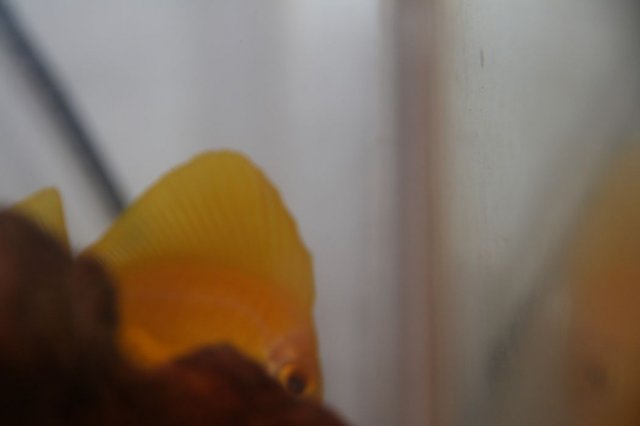 The tang is now pooing, so I am hoping that means it ate something. I know that sometimes fish poo when stressed, but it shouldn't be any more stressed now than it was before. It also is swimming around more and faster, so hopefully it is getting better.

Hindsight is a wonderful thing!

Keep your fingers crossed. They're tough little fish. Twice I found mine lying on the bottom of my tank. The second time she was so bad the crabs had started eating her fins. I put in a QT for 2 weeks in the dark. That was 2 years ago and she's still swimming around bullying the rest of my fish!!! I never did know what was wrong with her.

catpicklesdog said:
Keep your fingers crossed. They're tough little fish. Twice I found mine lying on the bottom of my tank. The second time she was so bad the crabs had started eating her fins. I put in a QT for 2 weeks in the dark. That was 2 years ago and she's still swimming around bullying the rest of my fish!!! I never did know what was wrong with her.
Click to expand...

I'm glad yours recovered, it looks like mine will be doing the same as it looks much better today. On that same note though, you might remember my problems with the blue tang that I had. The one that was fine for several months, then suddenly became stressed, hid a lot, and faded in color. It would get better then worse, then one day while it was in the better phase it suddenly had trouble swimming, got worse throughout the day, then died while being transfered to QT. I never did find out why it died, even after testing everything I could think of, but the rest of the fish are fine and I have never had problems with any of them.