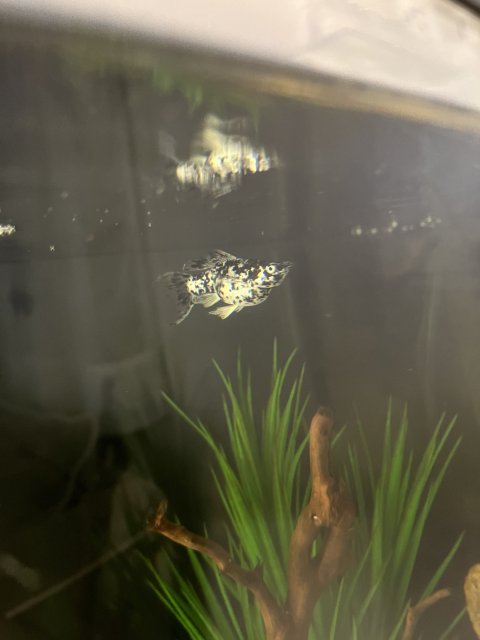 So I have this fish, lol. Just kidding, I’m not sure what to do at this point? I have her in a tank with 5 other mollies and 6 Sterbai Cory’s. Do I move her to my 9 gal planted shrimp/neon tetra tank?Buy a breeder box for the 20 gal and place her in it? I’d rather not buy a whole new tank for the fry since I have no room nor was expecting fry? no idea wtf to do, any insight would greatly be appreciated!!
Last edited: Dec 2, 2021
N

Can’t figure out how to edit the heading..
F

Well, it's hard to say. I don't see the dark gravid spot most livebearer females get even pretty early on. But, dang, she is fat! If you want a fry (or more) you should move her either into a breeder box or other tank.

Being a less than livebearer fan I'd leave her there & let "nature" take it's course. Likely molly snacks. Do you want fry right now? Or you can wait & decide later, there will always be a next time with livebearers...This is part of why I don't keep livebearers anymore.
N

I’m not sure, I say no but the misses says yes. Guess I’ll go get a breeder box tomorrow. Have a feeling she may go tonight and then we’ll talk about fry at a later date? First time with livebearers. My 6 year old picked them out…

Id leave her, but place a lot of floating plants in the tank, even fake ones.

Then when she has the fry, they tend to hide up top among the floating plants, scoop them with a net and put them into a box.

Moving her to the box before she has them can cause her to abort them or reabsorb them. So best not move her.

But yes she looks pretty porky pregnant and given the box shape can be soon! Not all get the gravid spot, especially among the fancy coloured mollies.
Reactions: dudley
N

Thanks for the insight! My wife is worried about the fry which is weird cause she and I really wasn’t thinking that far ahead..she said they better not eat my fish! Must be a maternal thing, lol. My favorite lfs will close by time I get off work so I’ll look for a box at other local pet stores where I buy media or random items.
T

One more thing to know. Livebearer females can store the male's sperm. they can have a number of spans as a result. There is a saying that livebearer females are born pregnant due to their prolific fry producing abilities.

I had a pair of common swordtails in my first tank. This is what caused me to get my second tank. Later on I became interested in the Montezuma swords and I kept several strains for years. Despite the fact that they are known to stop spawning for a while and then resume, I had tons of fry. I had lots of live plants. This helped with the first spawn or two. But, as more spawns came, it was not the adults eating the fry, its was their older siblings. But the Montezuma have a rep as fry eaters.

if you want to use a breeder box get one that allows new fry to drop into a portion of the box where they are safe from predation. But as noddle pointed out, breeder boxes can be stressful. Bear in mind that you will still have to do water changes on the tanks. Have a plan for what happens in the breeder box when you do.

I will not use the net breeder boxes because of this. I have a number of the Marina (now Fluval) large breeder boxes. They are made of plastic and with a small air pump they circulate water from the tank through the box.
https://fluvalaquatics.com/ca/product/hang-on-breeding-box/

I got mine from kensfish.com https://fluvalaquatics.com/ca/product/hang-on-breeding-box/ but they are available from many sources including Amazon.
Expand signature
'Everyone is entitled to his own opinion, but not to his own facts." Daniel Patrick Moynihan
"The good thing about science is that it’s true whether or not you believe in it." Neil DeGrasse Tyson
"How do you make a cycle go faster? Pedal harder." A. Nonny Mouze
N

https://www.aquariumcoop.com/products/ziss-premium-breeder-box I was looking at this one?
T

I see no reason it is worth $22 more than the one I linked except it has the fry separation and the mesh bottom. I have used what I linked for many years and have about 8 of them. I have not lost one fish in them.

I cannot tell from the pics re the Ziss, but on the Fluval I normally put a fine mesh bag over the intake. It has a tenedency to suck in floating debris in the tank water which will accumulate on the bottom of the breeder box. So will fish poop. I normally siphon out any junk in the box using airline tubing. I initially tried sticking some floss in the intake tube but it slowed the flow almost to a stop. So I went to the mesh bag.

I should also say that I only use the boxes for my plecos. I may pull a cave with a dad on eggs and let them hatch in the box. But mostly I use them when I am shipping fish. I pull the fish a day ahead and use the boxes to park them over night. These boxes are not good for isolating a sick fish since they circulate tank water.

Whichever one you choose will be better than those that do not circulate tank water or must be placed inside the tank. Those platic borxes with mesh side and bottoms can have issues if one is putting eggs into them to hatch out. Other fish can try to suck out the goodies inside the egg through the mesh. They don't need the egg shell, only the liquids inside.

One last heads up if you go with the Fluval- it has a couple of little gates whucj slide into the water return. Be sure to use one as the fry will otherwise just swim out of the box into the tank.
Expand signature
'Everyone is entitled to his own opinion, but not to his own facts." Daniel Patrick Moynihan
"The good thing about science is that it’s true whether or not you believe in it." Neil DeGrasse Tyson
"How do you make a cycle go faster? Pedal harder." A. Nonny Mouze
Reactions: Nyk0nn
N