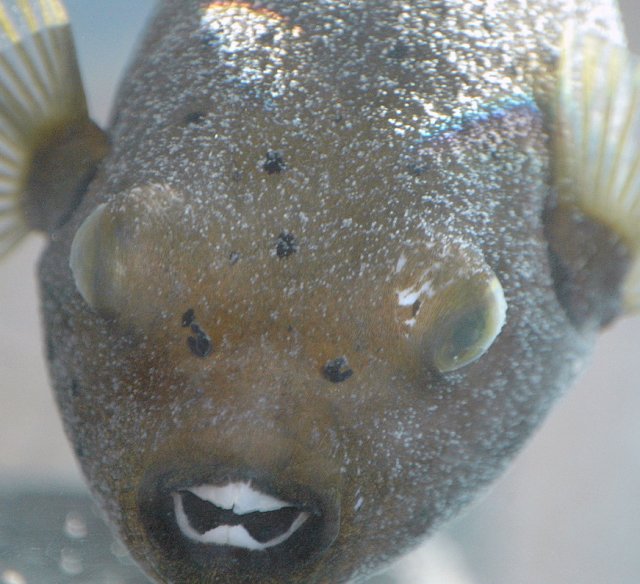 Help--beloved puffer near death I think. Mr. Wiggles has been the happiest, most darling, smiley guy even now when he's miserable. It's heartbreaking, and he's had this for at least 6 weeks and steadily gets worse.

Originally, whole tank had large chunky things and I was told it was black ich (despite being white) and treated with EM-Pro ( for gram + infections). Then treated for ich about 4 weeks ago, but it didn't clear up with medication. (Used quinine which is the only thing that ever worked for ich in my tank.) Also added additional beta glucan and garlic to the frozen food diet he normally eats.

The fish pharmacist at National Fish Pharmacy thought it might be an infection from my description (I couldn't get a good picture then), so I treated with kanamycin, beginning on Tuesday, no effect so far. It sure looks like regular ich, but could it be velvet/oodinium? No breathing problems which is why I question if it is velvet.

Just gave him a fw dip (which did absolutely nothing for him) and moved him to a 10-gallon QT (with lowered salinity to 1.018) because the large blue tang in my MT appeared to be nipping at him. Mr. Wiggles was definitely scared and hiding. Think the white scratches are from the tang slicing with his barb since they just appeared today.

Not relevant at this point, be he was in 150 gallon SW with large blue tang, 2 clowns, angel, moorish idol.

Please let me know if you have any ideas what this is.

Looks like ich/stress lead to a secondary infection.(hey when you go out drinking you don't drink just brand of beer =)) I hate to be the bearer of bad news but he will most likely die. You probably were sold a fish that was a bit fresh off the plane so he may have looked like it's ok but due to the stress of transport and rehoming it stressed. I have been importing fish for a very long time and SW puffers have some of the crappiest shipping mortality overseas to here. I'm sorry to hear that.
I take it this is your first SW?
Expand signature
Collector of the rare and weird. Still don't have a Sand Worm yet =)