Samurai Gourami (Sphaerichthys vaillanti)​
Many people believe a lot of gouramis are very easy to keep and care for however it must be remembered that hundreds of other species have clearly not been known yet and some may have requirements more complicated than others. There are quite a few species of gouramis that have such requirements including the popular Chocolate Gouramis (Sphaerichthys osphromenoides osphromenoides) and the Licorice Gourami (Parosphromenus deissneri).

There is one gourami however that is not as sensitive as the Chocolate Gouramis (Sphaerichthys osphromenoides osphromenoides), yet, should still be treated with great care. It is the Sphaerichthys vaillanti which has been found in the hobby from time to time although they are still not commonly available. However, a few hobbyists are lucky enough to encounter them given the fact they are able to source them from reputable dealers online globally.

Sphaerichthys vaillanti is one of those fish that is categorized under Anabantidae. Though several species of gouramis are already popular around the trade given the fact they have the ability to survive oxygen-depleted environments and even deteriorating water conditions, most species have yet to be discovered while several others are now extinct or under threat due to increasing human activities which leads to the destruction of their native habitats.

The Sphaerichthys vaillanti hail from the Kalimantan River in Borneo. The water there is very soft and acidic with a pH as low as 4-5. They live in parts of the river system where water is very slow-moving. Visibility is slightly poor owing to the fact the water is amber in color from the rotting leaves surrounding their habitat.

In an aquarium similarly, driftwoods must be put in placed to serve as refuge for these fish. Water must be filtered with peat, oak leaves or Indian almond leaves to maintain the acidity required. They may be acclimated in pH higher than that of their native habitats however best results are always found in conditions replicating their native habitats. Fungal infections are far more common in cases where they are kept in water conditions far from the conditions their native habitat has provided them. Dim lighting is also a must as these are very timid fish. Likewise, providing more plants always helps as this allows the fish to feel secured enough in their surroundings that you will see them showing their best. Temperature must be maintained at 26-28 degrees Celsius.

These gouramis are a bit larger than most of their sensitive cousins growing to 7-8 cm. These are best kept in a small group rather than pairs with a tank minimum of 20g for a group of six. They are very peaceful fish that will dwell in the middle to lower regions of the tank. It is often observed that a pair may established a large territory although no serious damage nor dominance behavior will occur as it does to their more popular cousins. Boisterous fish species must be avoided as they will not do well in company of those. If other inhabitants must be provided, make sure they are equally quiet and peaceful. Microrasbora sp., Boraras sp., Pangio sp. and most Corydoras sp. suit well in a tank containing these gouramis.

Sexing may be a little tricky however if you are observant, the female may have vertical red and green bars. Males are usually plainer in looks with a pale gray or brown tint. The colors become more intense during spawning period. Sphaerichthys vaillanti are mouth-brooders. Their breeding ritual seems far the opposite of what most anabantids do. Females are the ones who usually will defend their territory whereas the male broods the eggs. The male will be unable to eat as he will keep the eggs inside his mouth for nearly two weeks until they hatch.

Like their cousins, Sphaerichthys vaillanti may also be picky when it comes to foods so you will be lucky if your own fish manages to consume commercial foods without too much hesitation otherwise be prepared to keep a constant supply of live foods and frozen foods. They will forever relish mosquito larva, daphnia, brine shrimps and bloodworms. Freeze-dried foods may not be taken easily as they will with live foods and frozen foods.

Pictures below are courtesy of our fellow member, Nirun R. Chawla (Inka4040). 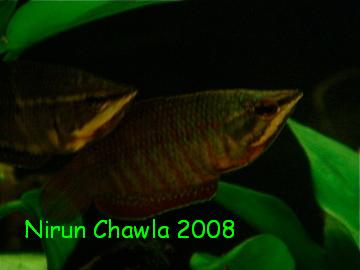 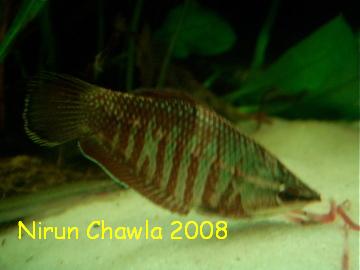 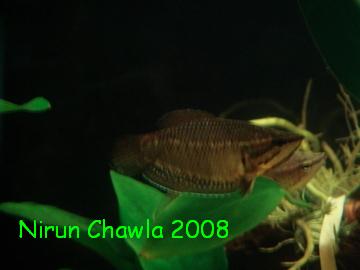 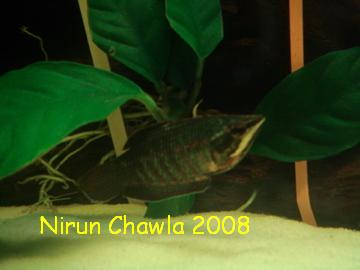 Last edited: Jun 19, 2008
Expand signature
Hakuna Matata! What a wonderful phrase! :dance:
Storm clouds may gather,
And stars may collide,
But I will love you until the end of time!​