I have a pair of angelfish and wanted to know what I had. 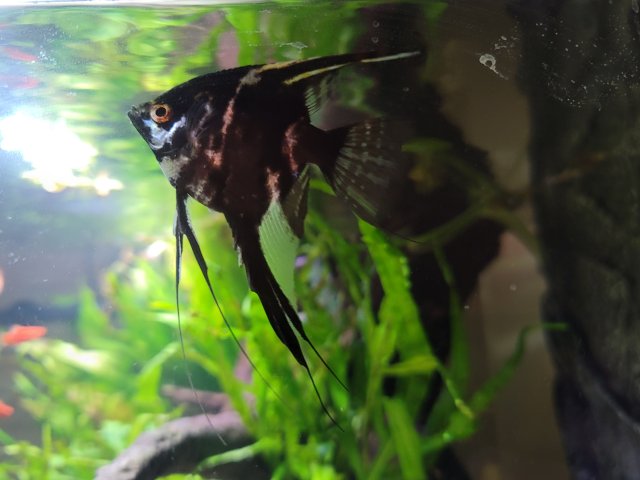 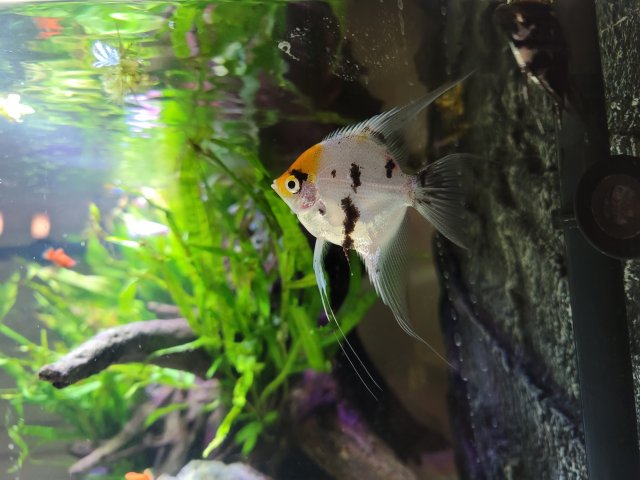 Angelfish don't typically show any significant sexual dimorphism. It's hard to tell sexes without seeing the genital papilla, the tube that the fish extends to deposit milt or eggs (also called the ovipositor in females). A male's is narrow and pointed, while a female's is bigger around and blunt. I don't see any signs of either in your fish.

Some cichlids can be "vented", turning the fish over and looking at the shape, size and/or color of the genital pore to determine sex. Angelfish are not one of these cichlids. So if someone tells you that you can vent your angelfish, don't. It will cause stress to your fish with no benefit. Venting is very effective with Rift Valley cichlids, I've vented hundreds. But a majority of New World species can't be vented with any measure of reliability. With many Central and South American cichlids, however, it doesn't matter. Sub-adults and adults show sexual dimorphism (differences in size, color intensity, shape of fins, presence of a nuchal hump in males, etc.). Unfortunately, angelfish are a species that shows no significant, reliable differences between males and females externally, except for the genital papilla during breeding.

For future reference, if you're interested, oscars are another species that can't be vented and show no significant difference in the appearance of the sexes.

In the fields of observation chance favors only the prepared mind - Louis Pasteur
Reactions: CaptSugarCookie
T 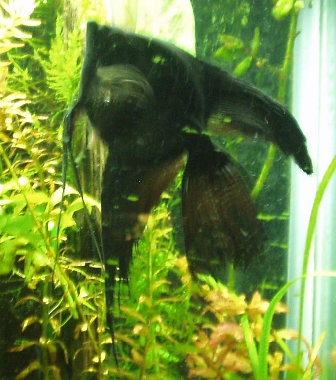 Expand signature
'Everyone is entitled to his own opinion, but not to his own facts." Daniel Patrick Moynihan
"The good thing about science is that it’s true whether or not you believe in it." Neil DeGrasse Tyson
"How do you make a cycle go faster? Pedal harder." A. Nonny Mouze
Reactions: CaptSugarCookie
F

I've kept angels several times over the years & you just can't tell by looking, lol. By body & fin shape, behaviors...& even genital papillia...it's not all that easy...& then there's fish preferences...there's some iffiness IME. I was sure I knew which genders I had last time I kept group of angels, hump head (male) & chubby tummy (female)...but NO! I was wrong. They did spawn in a surprising pair & produced free swimming fry...

I also was given 2 angels many years ago from a friend that was moving. They laid eggs regularly but both were female. We got a young likely male & try as he might flirt & wiggle the older angels were not interested. They were set in their ways & while not too aggressive to the young male, he just wasn't interesting enough for them to change...caviar over fry? Not IME...
Reactions: CaptSugarCookie
T

And now a warning, be careful what you wish for. That tube down led to this: 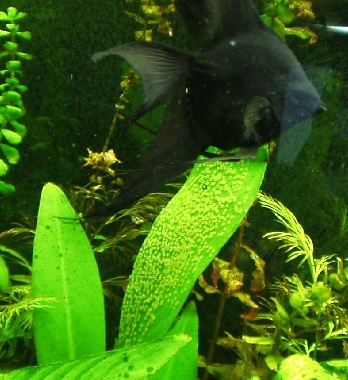 And they were doing this every two weeks or so. It taught me I did not want to spawn angels. This was confirmed when I talked to a few angel breeders and was advise that for every breeding pair of angels I would need two 55 gallon grow tanks for offspring.The there was the culling.

Plus, to get those eggs to hatch, I had to cut the anubias leaf off and put it into the above tank in which they went free swimming. It took me a couple of years for the plant to get leaves to that size.
Expand signature
'Everyone is entitled to his own opinion, but not to his own facts." Daniel Patrick Moynihan
"The good thing about science is that it’s true whether or not you believe in it." Neil DeGrasse Tyson
"How do you make a cycle go faster? Pedal harder." A. Nonny Mouze
Reactions: Sprinkle and CaptSugarCookie
F

Oh, I forgot about the culling That's always hard...& that's part of why I don't "intentionally" breed much any more...I'm happy with a few accidental fry survivors, no grow out tanks, fry foods, etc. But it is fun a few times...cichlids are especially fecund & rewarding; the parental care is always interesting
Reactions: CaptSugarCookie
You must log in or register to reply here.
Share:
Facebook Twitter Reddit Pinterest Tumblr WhatsApp Email Link
Top Bottom