So I'm somewhat new to fish keeping - I had goldfish in the past, and recently switched to a tropical tank. I found a really neat looking fish at my local fish shop, a geophagus heckelii - I bought it, brought it home, and all was fine for 3 weeks. I have a 45 gallon tank with a canister filter, I keep it at 79 degrees, and I have a 12" air stone with a 40 gal pump (which the shop said was fine for my tank). Previous to getting the heckelii, I had 2 x-ray tetras, 2 red-finned tetras, 2 diamond tetras, a bamboo shrimp, 2 dwarf guaramis (1 red, 1 blue), and 2 spotted corys to eat the excess food off the bottom. I got the heckelii and everything was great for 3 weeks - at that time, my local fish shop said that 4-5 jewel cichlids would round my tank out nicely, so I bought 4 jewels this past Saturday. That's when everything went wrong.

My heckelii immediately got territorial and started chasing around the jewels (who don't seem to be the aggressors at all, they run away from the heckelii). He ate an x-ray tetra (I replaced it) and the bamboo shrimp, then ate another x-ray. I returned 2 of the jewels. So currently, my setup is 1 x-ray tetra, 2 dward guaramis (1 of which is currently recovering in a baby breeding net because the red guarami was picking on it and eating its back fin pretty bad), 2 jewels, 2 diamond tetras, 2 red-finned tetras, and 2 spotted corys.

I use well water, the pH is always above 7, my nitrates are the lowest setting on my test (yellow), and I get my water tested at the fish shop regularly - I had a water test last nite, and the shop said everything looked great (in fact, they often use the words "great" or "perfect" and always seem impressed with the water quality). We do water changes every 2 weeks. I don't know the exact parameters of the tests because the store usually does them for me... But they always come out good.

2 days ago, we noticed 2 round things that looked like injuries on his face - I thought maybe hole in the head, but the water quality is fine. Upon doing research, I found that hole in the head can be due to lack of proper vitamins/nutrition. We feed flakes, but after Googling it seemed that maybe he wasn't getting enough (since the heckelii doesn't go up to the surface the same way as the tetras) so I thought maybe the aggression and the head issue was due to that - gave him some shrimp pellets yesterday, and he gobbled them up. I thought problem solved, but then about 2 hours after eating them, he puked - like, a big puff of expanded pellet came out of his mouth... 3 times. Yesterday afternoon after regurgitating (which 1 of the jewels also did), he didn't want to eat - he also didn't eat today. He was flashing yesterday, and broke 1 of the injuries on his head open. I also saw one of my jewels flashing. Not sure if it's territorial, or what - the fish shop says they had the heckelii for over 3 months and the jewels for over a month with no parasites. I haven't added anything new that wasn't from there, just the jewels (before that, everything in my tank was fine).

I went to the fish store yesterday, and picked up some Primafix and Melafix - dosed the water yesterday and today. I also picked up some cichlid veggie pellets and tried feeding him those yesterday and today, but he showed 0 interest in eating. I cut up some zucchini and put that in there, no interest in eating. Today, he's spending more time than usual near the top of the tank - he's breathing heavily, and his fins are clamped (like a cat with his ears pinned - he's breathing faster than normal and his gills are flaring more than normal. He's got his dorsal fin pinned to his body, his lower fins pinned up, and his tail fin compressed). I'm not even sure that it's heavy breathing all the time... It's weird - it's almost like he has something stuck in his throat or something, like he kinda shakes his head and opens his mouth wide and then breathes more normal, but I can see the skin flapping out of his gills (which I normally can't see). He looks uncomfortable, but it seems to have started after he threw up those shrimp pellets (before that, he ate them voraciously, and ate quite a few - I thought maybe the puking was just that they expanded in his belly and came back out, but my loach or goldfish never had any issue with regurgitating and the fish store said shrimp pellets were fine to feed him). My fish shop is at a loss and can't figure out what's wrong, or what to do next - I don't want to lose my fish. Please help!

I've attached some pics - 1 is of the injury on his head, 1 is of that injury split open after he flashed on the gravel, 1 is him with his clamped fins, and 1 is what he looked like when I got him and he seemed happy 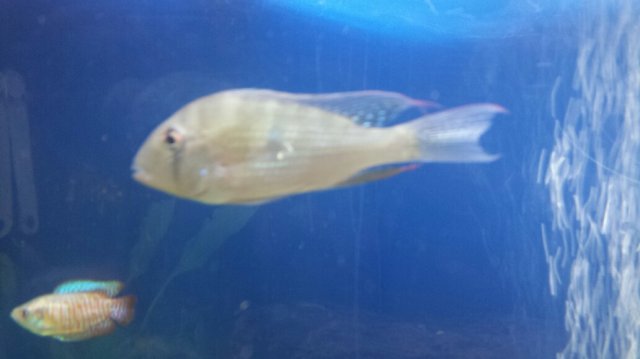 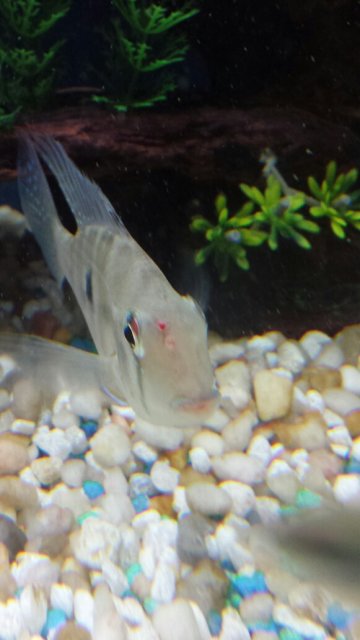 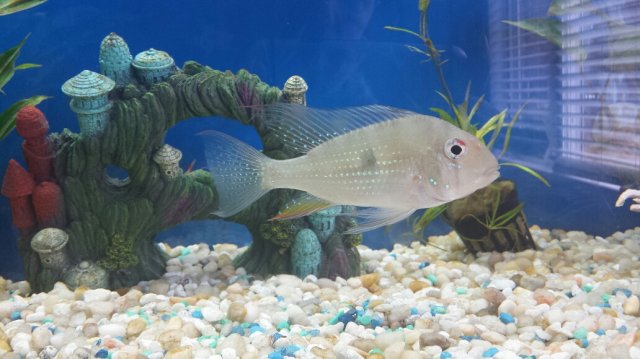 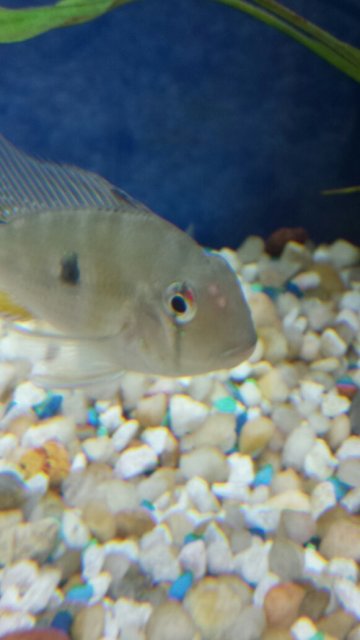 It seems like he has a protozoan infection. I would treat with Prazipro or a medication that contains metronidazole.

A. heckelli for your tank is not a good choice. These are fish that get about 8-10" long and really need at least a 75 gallon tank to do well. They also like a warmer water temperature and are not good with small fish. I would also increase your water temperature up to 82-84 degrees.

I keep a group of 9 of them in a 120 gallon and they have been doing fine for the last 2.5 years. However, they are known to become extremely aggressive towards each other when spawning so I am dreading the day when all out war erupts in the tank.

Jewels as in african jewel cichlids???

usually not a good mix for SA/ca cichlids but it has been done..the water conditions are similar tho like Andy I'd suggest you bump the temp up t0 82-84.. btw I fight protozoan infections by keeping the temp around 88+ for Altum and Discus.
I also agree the tank should be larger.. if the fish store has the fish for 3 months and you've had if for additional time it should be approaching adult size.

also I'd prob consider more frequent water changes..
also the A. heckelli is an omnivore and while it will sift thru detritus it may need a meatier diet. (most general flake/pellet food will suffice )
Expand signature
Don't Meddle in the Affairs of Dragons...because to them...you are Crunchy and taste good with Ketchup.

that's Yukio in my avatar
N