I would suggest picking your favorite out of those and modelling the tank around them.

Oscars are big, require a lot of space, but are not super aggressive (in cichlid terms).
Firemouths can be kept in groups and are relatively peaceful cichlids.
Electric blue JDs are smaller than your average JD and may not hold up as well against more aggressive fish.
Texas cichlids are mean and will be the boss of the tank more than likely.
Jaguars are large and aggressive.

If you want a peaceful tank and want more than one specimen of each species in a 150 I think you could do an Oscar and a few fire mouths or EBJDs and some dither fish.

If you go with the Jag I'd personally suggest he be the only cichlid (with the species you mentioned). Then you can add some dither fish.
Same goes for the Texas. Or you could do a breeding pair of either of these.

There are far too many cichlid species for me to answer the etc part of the question. If you stock multiple species, stock the most peaceful one first and never add a single fish at a time.
Expand signature
"Boldness is always rewarded"

Not planning on adding ALL of these but these are the fish we like. Going that route what are some combos we could do and how many could we go with?
Click to expand...

Oscar won't work, Bro....no teeth to defend itself.....the other fish are bruisers and should be ok together. EBJD MAY work, but you'd have MUCH better luck w/ a normal JD or a harem of them

Jags can be kept communicably if you raise them with other fish, and Texas and Amphilophus seem to make good tankmates as well as JDs, Convicts, Pike Cichlids, and armored fish. Nothing is set in stone and each fish is an individual so what works for me may not work for you.

My advice is LOAD the tank with caves and hide-spaces before adding fish.....and I mean PACK IT FULL of every cave and hide-space you possibly can, like this: 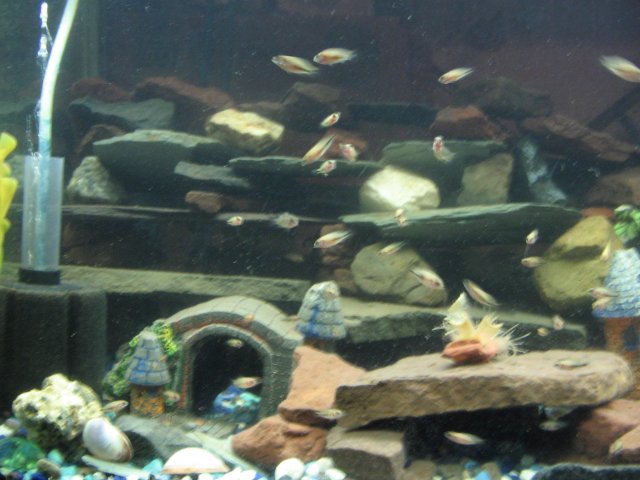 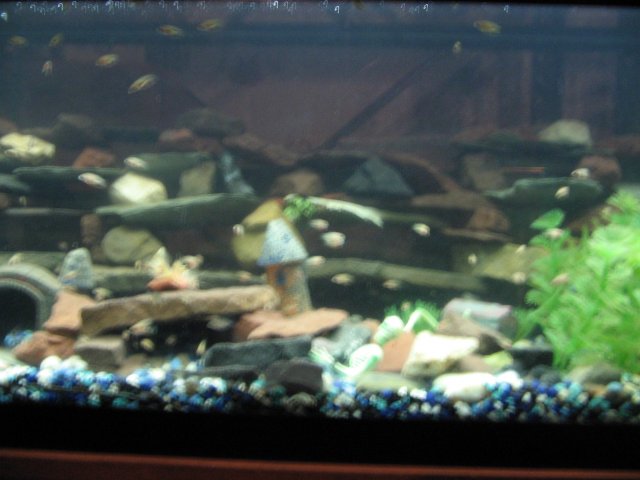 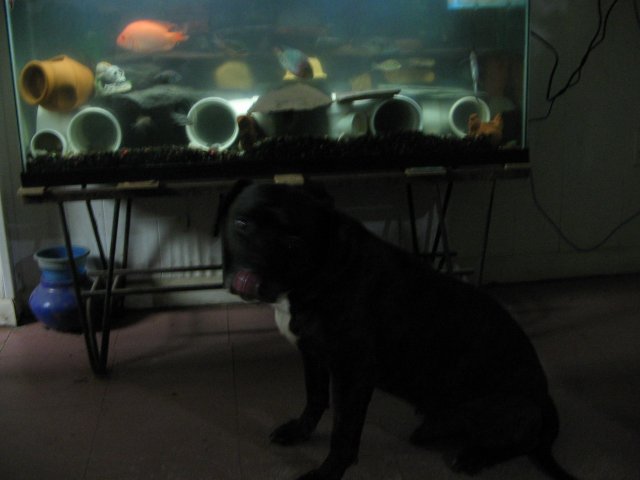 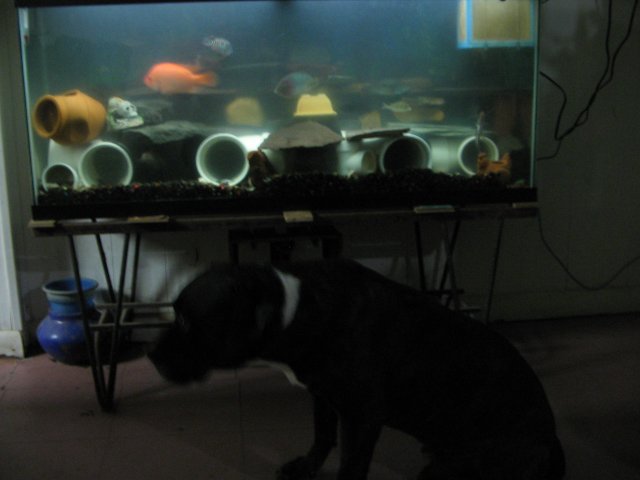 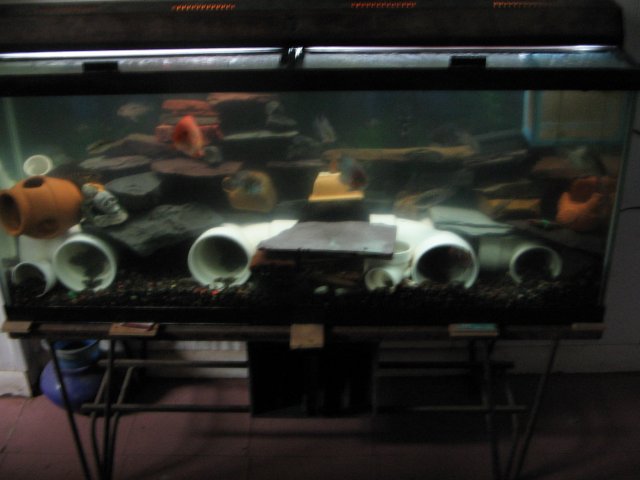 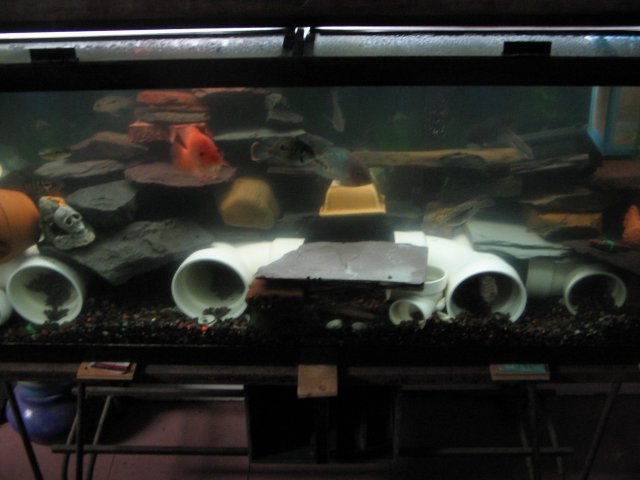 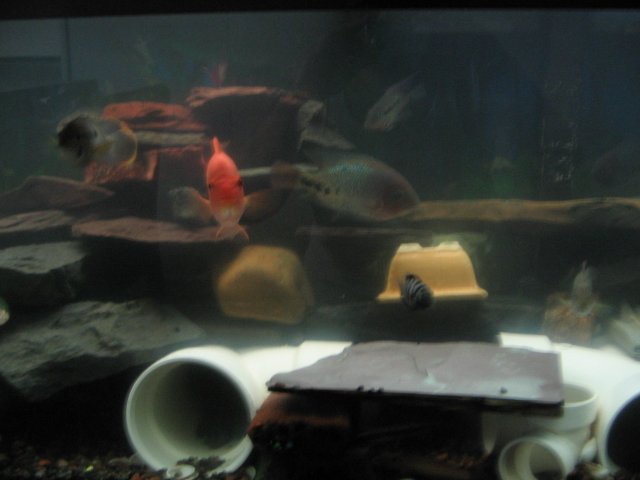 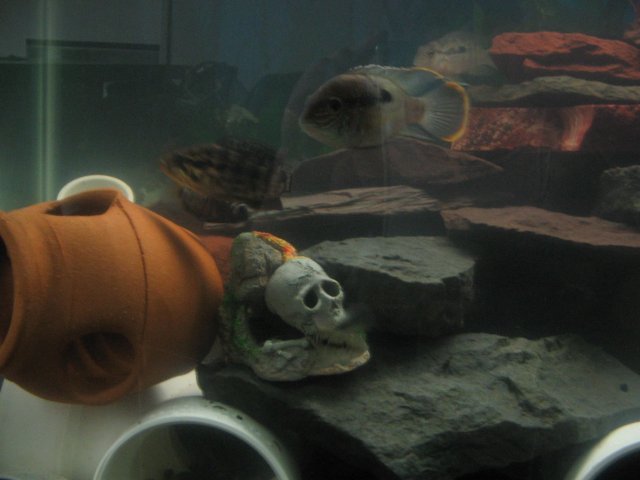 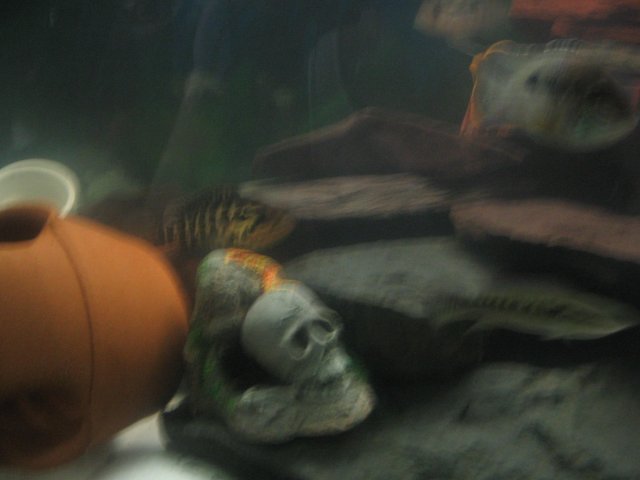 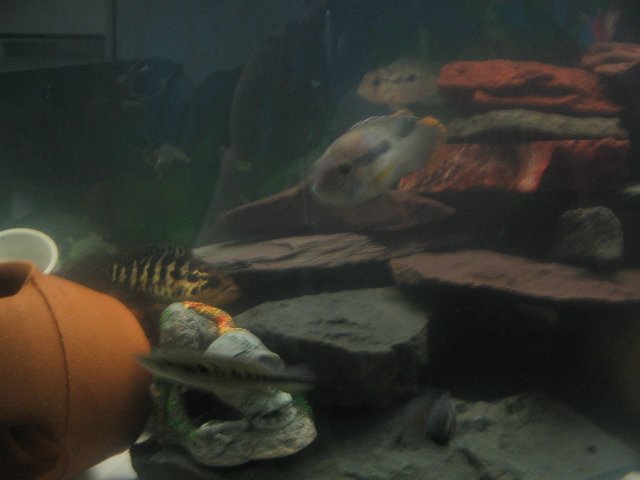 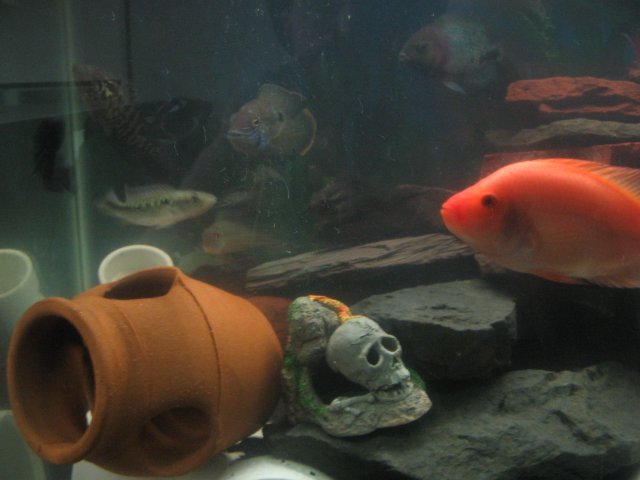 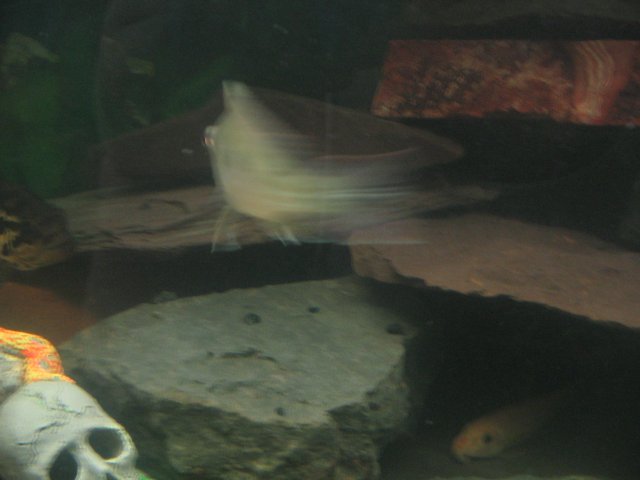 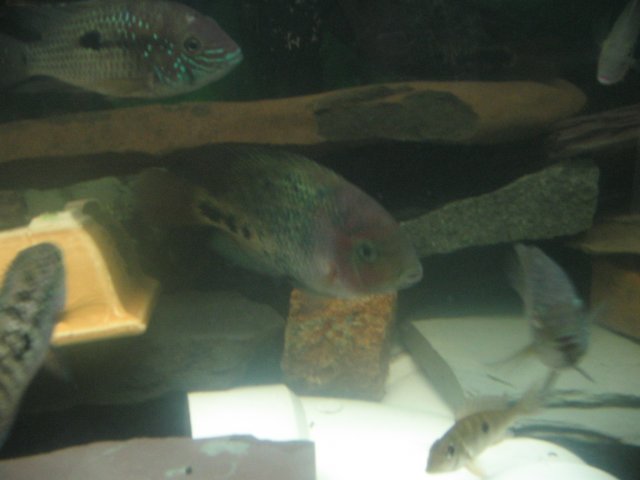 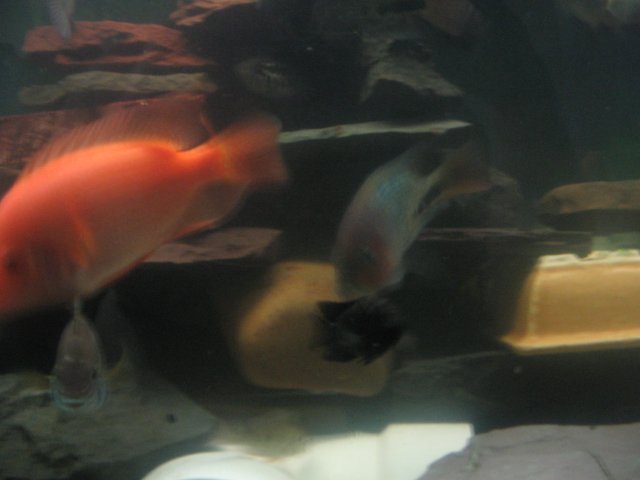 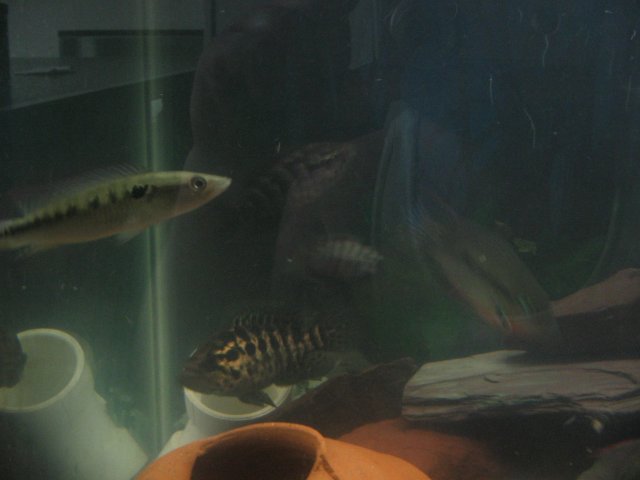 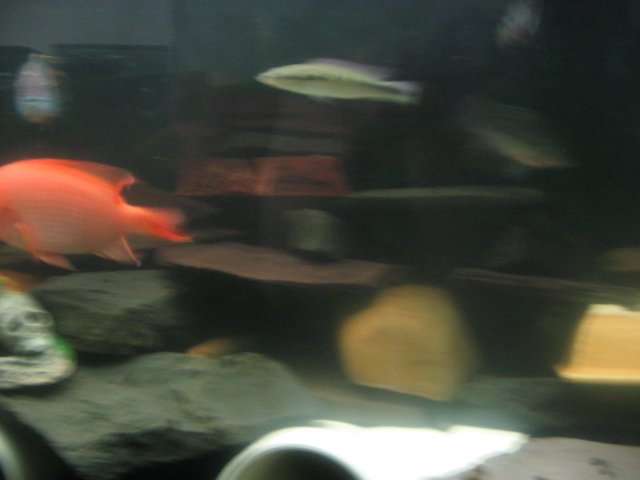 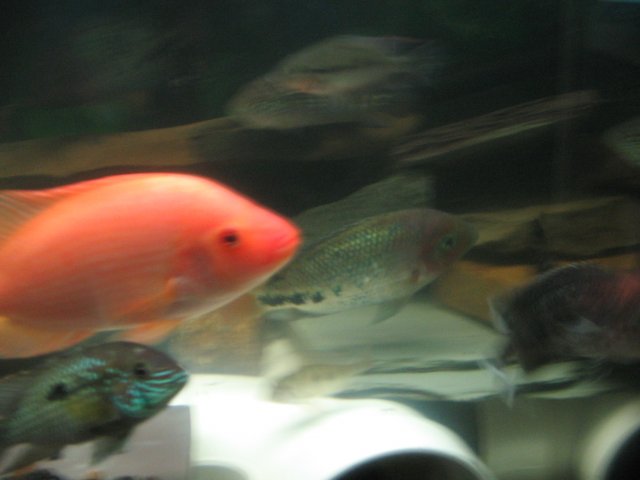 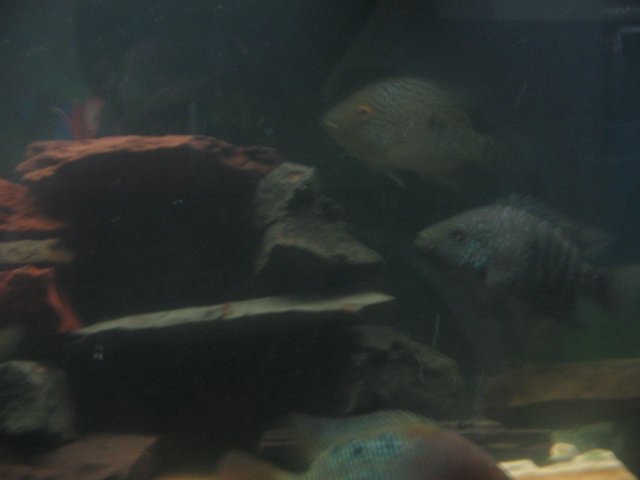 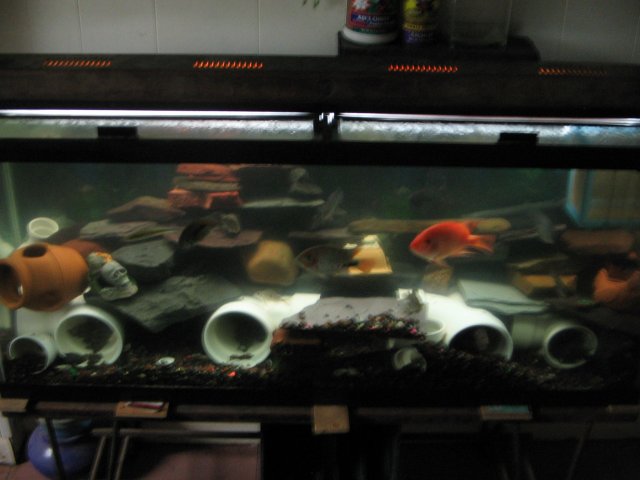 The 1st two pictures are a 20g Long for fry, and the rest are the 55g I started a bunch of fish in last year. As long as you have a bigger tank to upgrade, I just simply move things on to the bigger tank when I feel it's needed and anything that gets bullied go back to the Grow-out tank (55g or whatever tank you decide to begin with). I always keep a few tanks with different size and aggression to move things around when necessary.

IF a fish gets bullied and/or beat-up, moving it to a new tank before it heals only makes things WORSE - the last thing it needs is to reacclimate and get used to a new PH, new tankmates, temps, get more stressed, etc. Buy several Breeder Nets to isolate fish a few weeks that get beat up (the floating ones work best in case the suction cups come loose). This ensures minimal stress during the healing process and then you can move them later once they are healthy again. Do NOT re-acclimate a fish twice in the same 2 week period either. 2 Weeks is bare minimum for fish to acclimate unless you are dealing w/ fry and fish less than 2" WITHOUT injuries.

That's it - I pile everything into a tank loaded with cover and caves and start w/ 1 TBSP of salt for every 5 gallons of water and also add Stress Coat. Medicate if you need to but try to start everything of at once so you don't have to keep medicating. Pick maybe 15-20 fish you want to keep , add them all to a previously cycled tank and monitor them closely and just either isolate the bully or the weakling. I usually isolate the weakling since a "GOOD" tank boss will be keeping everything in check, but you will have to use you better judgement.

Sometimes you remove the weakling and the Boss just picks a new target.

Sometimes you remove the Boss and another one just takes it's place.

Sometimes you remove the Boss and all CHAOS ensues because it was the only thing keeping ORDER.

Females generally make the best tank-bosses and are more mild-mannered than males, EXCEPT Green Terrors, IME

Your tank Boss will likely be the largest fish in the tank. The female Red Devil in the pics was Boss, but very fair and accepting of tankmates and never killed or beat anything to death. She stood her ground, but would not tolerate any other fish trying to "take command" while remaining neutral almost 100% of the time.

Unfortunately a MALE Amphilophus will assassinate everything in it's path just cuz he has a bad hair day.

Live and learn, get experience, ask for help and watch your tank INTENTLY everyday several times per day.

This is how it's done if you want to keep a mixed Cichlid community.