So I have a 20 gal non planted. It currently only has 1 marbled Angelfish in it. I know the fish is to big for the 20 but I was given advice from a newb emp at the local fish store. After talking to one of the guys I trust there, he said I should move it to my 29 gal planted tank. I tried to convince my 6 year old but I’m losing this battle… so for now I’m leaving it in the 20 gal but need ideas on to what I can put with it?
this is what I found on the site for the local aquarium store.
Any insight?
Barbs: Cherry Barb, Rosy Barb, Gold Barb, best in groups of 5 or more. Avoid Tiger barbs as they may
nip the angels fins.
Rasboras: Harlequin Rasbora, Brilliant Rasbora, Scissortail Rasboras, buy in groups
Livebearers: Moons, Swordtails, buy 3 or more.
Tetras: Some of the more active Tetras mix well: Black Tetra, Bleeding Heart Tetra, Congo Tetra, Emperor Tetra, Serpae Tetra. Avoid small tetras such as Neons. Buy in groups
Danios: Giant Danio, Gold Danio, Pearl Danio, Zebra Danio, Glo Danios, buy in groups
Gouramis: Blue Gouramis, Gold Gouramis, Moonlight Gouramis, Kissing Gouramis , Pearl Gouramis, Platinum Gouramis, they should be of similar size to the Angelfish.
Eels, Knifefish, Elephant Nose: These can add an interesting addition. Buy as singles and provide hiding spots on bottom. African Knife, Black Ghost Knife, Fire Eel, Spiny Eel, Tire Track Eel, Elephant Nose. Loach: This will add some excitement to the bottom. Small Clown Loach, Kuhli Loach, Weather Loach, most of the many Botia varieties.
Catfish: Most catfish including corydoras, plecostomus, synodontis
Sharks: Red Tail Shark, Red Rainbow Shark, Tri Color Shark, Roseline Shark.
F

Many of those fish on your lists get too big for a 20 or 29g, need a group of 6+ that you don't have room for either or probably won't mix well with the angel. Gouramis & angels are not usually a good bet...especially in a small tank.

Id go for kuhli loaches, they tend to prefer the warmer waters that angels prefer.

If you went with corydoras, go for sterbai, they prefer warmer compared to most corydoras species.

But would not add anything else up top. Not enough space to share between them and the angel.
N

Eeek, I see shrimp snacks & gourami fighting ahead. Not a good fit for the angel, just as well you didn't move it. We know it's hard to stock with kids (& sometimes spouses, lol) involved. I like NoodleCats idea of here are 3 or 4 species, pick 1.

I started to write about the temperature thing too but it seemed pretty negative with all my other bossiness. I think at least both of us see trouble ahead in your 29g.

Just for future reference, a "group" of schooling/shoaling fish is at least 6 at a minimum & you should always stock for eventual adult fish sizes. We know it's hard when most of our fish are juveniles when we buy them, they're so small & the tank looks empty!
N

Not sure if this is aloud but this is what I have access to at the local shop.

The golden kuhlis are probably pangio doriae, which are a really fantastic option

Places interchange the common name between these guys a lot, so without pics this is an assumption
N

Don’t think the wife would go for the loaches, maybe the Cory’s?
N 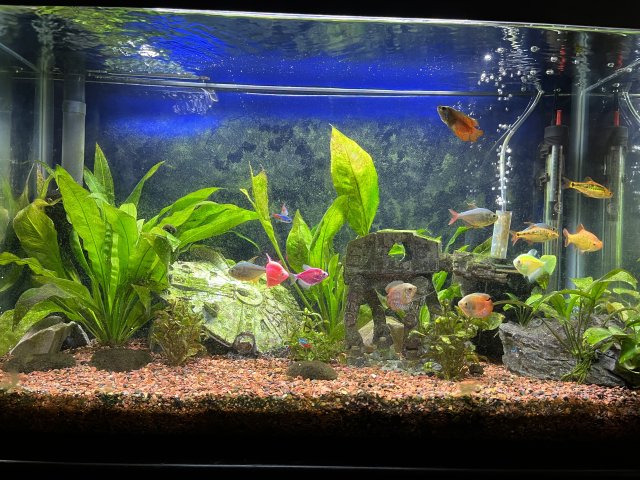