Holy crap I hope mine ends up like that! That is increadible! I think the most visible growth I'm getting is from my green digi, I hope nothing bad happen in my tanks. it's so unfortunate what happened to yours and guilos.
Expand signature

Robert04;2278030 said:
These are some corals I got awhile ago, They were listed as "Gonorias" if anyone want's to give a scientific name that would be nice
Click to expand...

Guillo's 300G tank has made a full recovery. He is my "go to" guy when I am ready to restock my tank. Since he has such a larger water volume, and does far less water changes than I do, his tank wasn't affected nearly as bad. Other things also contributed to my problems as well.. water was only one piece to my disaster.

That's a very nice piece there Ace. we don't see some of the corals in your tank around here. I only see them on line and because I can't see them in person it's kind of hard to buy and then some of the shipping crages are a bit crazy.

Ace25 said:
Conski, here is the red planet the day I bought it, paid $100 for this frag. This was right after I placed it in the tank, that is why the polyps are not out. 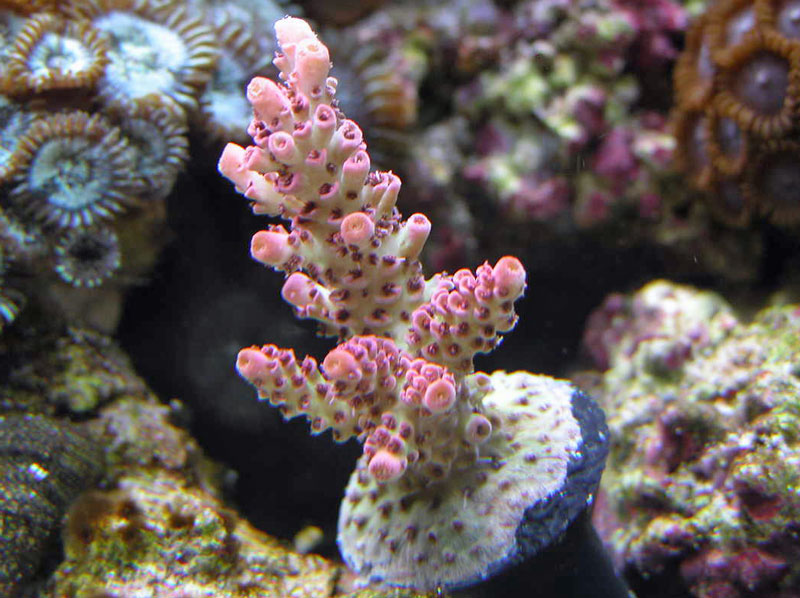 going to take a picture of my red planet

I picked up a few "easy" frags from Guillo1 today to test my tank out and see if it is ready for corals. Got an orange cap, green digi, and spongodes monti, all 3 are usually considered "easy" SPS corals. I also picked up a huge mat of green star polyps that I put in my 29G tank. Even if these corals make it I am still waiting a few months before I think of buying any new ones so I can get all the hair algae to die off.

Other than my on going low pH problems (7.5-7.8) everything else has been stable for about a month. Whenever I try to add a chemical like Seachem Balance to fix the pH problem, or chemi-clean to fix cyano, or AlgaeFix to get rid of hair algae, it seems to do more harm than good, so I am just leaving it alone now and hope everything fixes itself.

I decided to go back to my roots with my tank, go with what worked for me the last time it was looking good. What that was, was just using kalkwasser in my top off water to dose alk/ca. Since I moved I switched to trying to dose 2 part. I ran out of B-Ionic Alk and made up a batch of BRS Alk but still used the B-Ionic for calcium. Not sure if mixing the 2 would have caused any issues, but I know it was more of pain to do than just using kalkwasser. Plus kalkwasser has always worked for me in the past. The main reason I switched was when I moved it was to an area much colder than where I came from, which meant my ATO was not going as often. I didn't think it would be enough to handle all the corals I had since it wasn't dosing as much so I decided to stop using kalkwasser and go back to 2 part so I knew exactly how much was going in each day. Well.. not sure if it hurt doing that, but it sure didn't help either. Now it is starting to warm up again and I have no corals.. well.. compared to before, so using kalkwasser in my ATO will be enough for a while.. coralline algae is growing like crazy... sheets on my back glass now.

Today, the few corals that I had left are showing good polyp extension, colors are returning, and starting to show growth. Even a few encrusting pieces left on the rocks from dead corals I cut out are starting to show signs of life, polyps wanting to come out. Hair algae is finally starting to die off and cyano as well. One thing I have been doing for the past 3 weeks is dosing vodka again.. I know it is risky and I am 50/50 myself with it working or not. First time it worked great, second and 3rd time I had too many other factors happening that I think it made it matters worse, but this time it seems to be helping. Just wanted to update.. nothing to spectacular yet, but after a month of stability it feels like I am finally starting to see a light at the end of the tunnel.

So after a year of trying to get my tank back to what I feel is "good" I think it is finally there. Now I can start restocking a few choice pieces of coral for my tank and watch it grow. I need something for my sand... maybe a fungia or scoly. 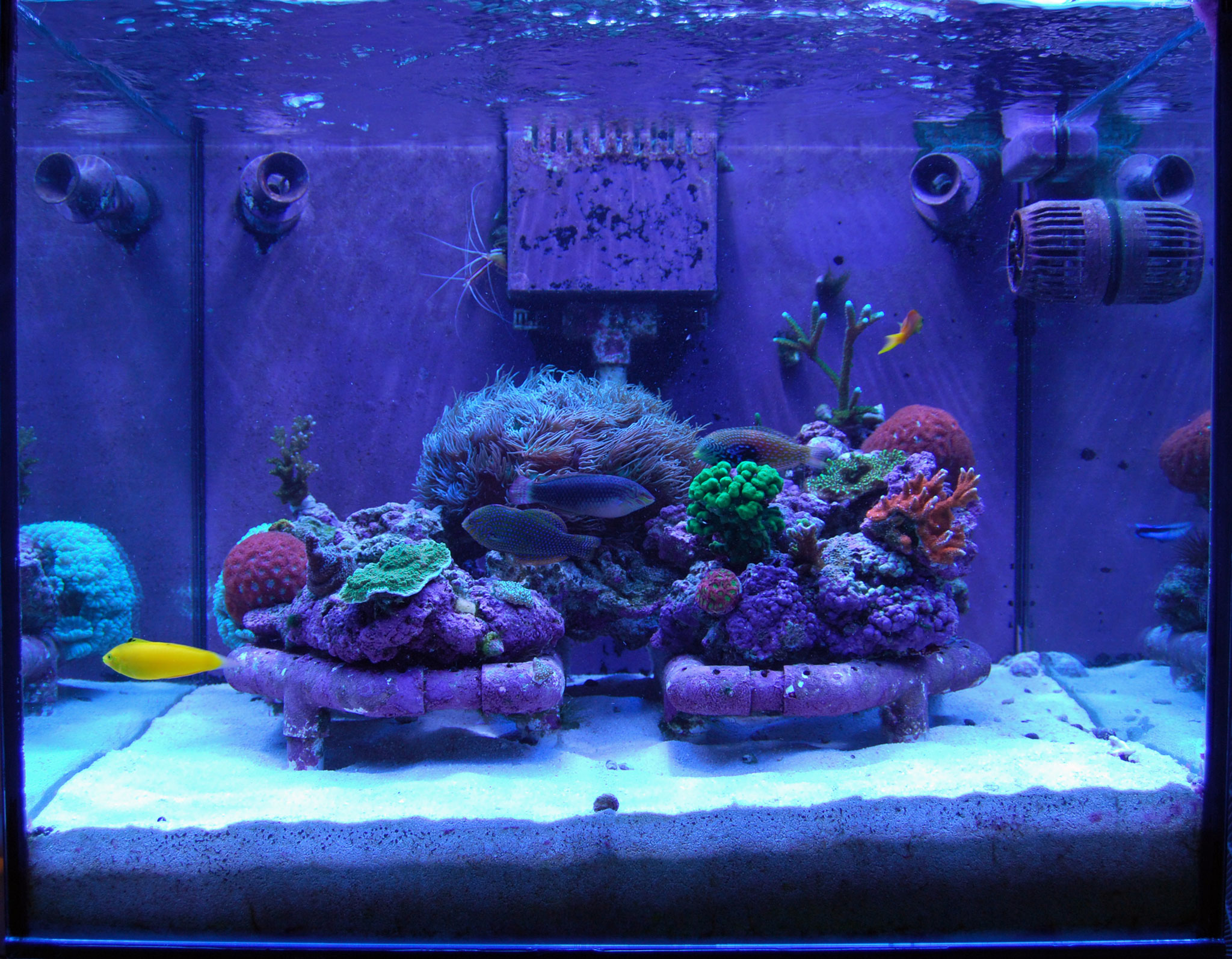 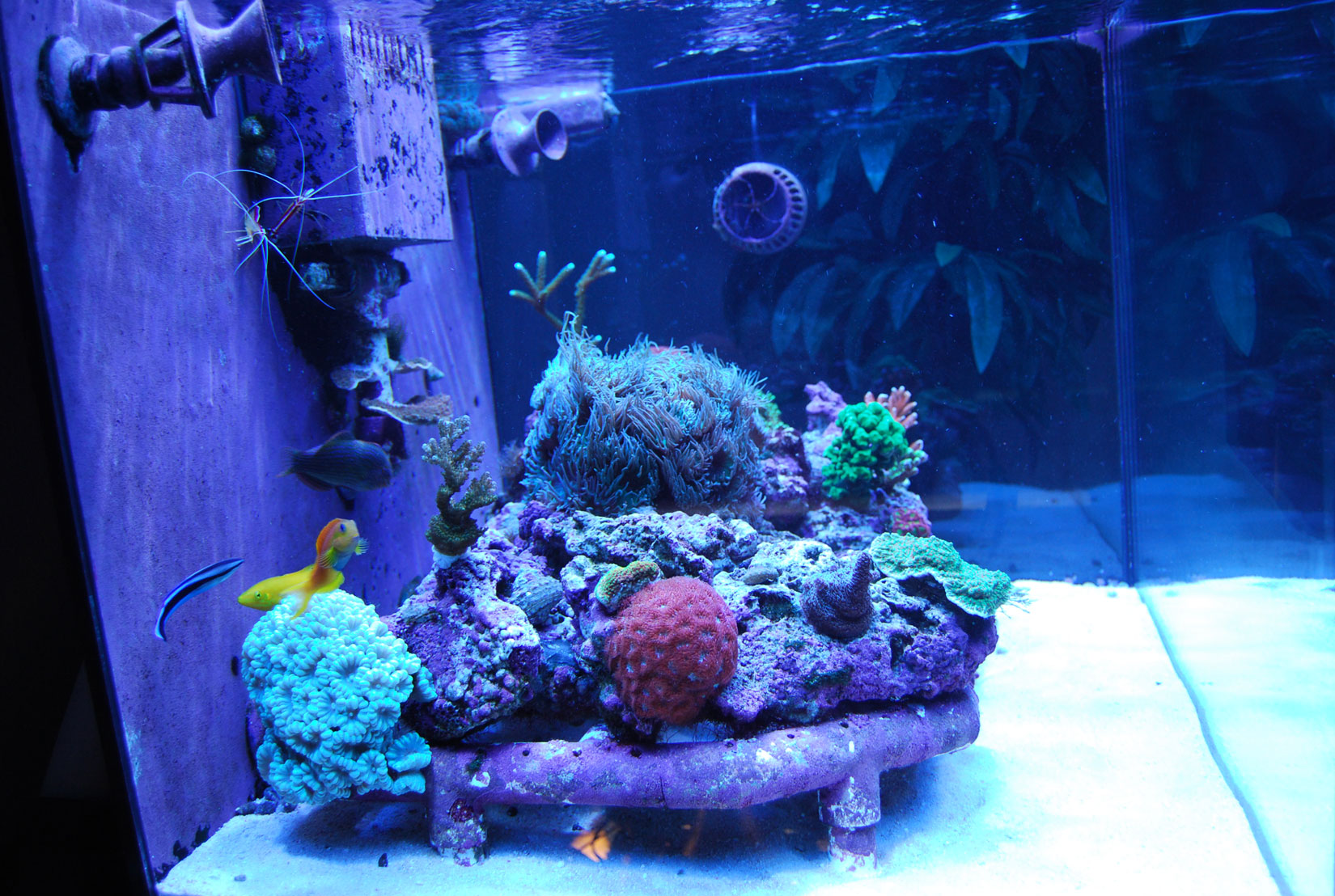 Yup, very purple right now.. I will gladly take that over red turf and green hair algae infestation, which up until a month ago was still what my tank looked like.

Silly rabbit, ATSs are for kids.

Like I said in the other thread, tank looks fantastic. It's absolutely immaculate in that pic, minus the coralline, which I tend to leave myself.

And here is where all that algae ended up. Sump is naaaaasty. But it has no odor and appears to be doing great... almost all natural filtration, just carbon and algae. 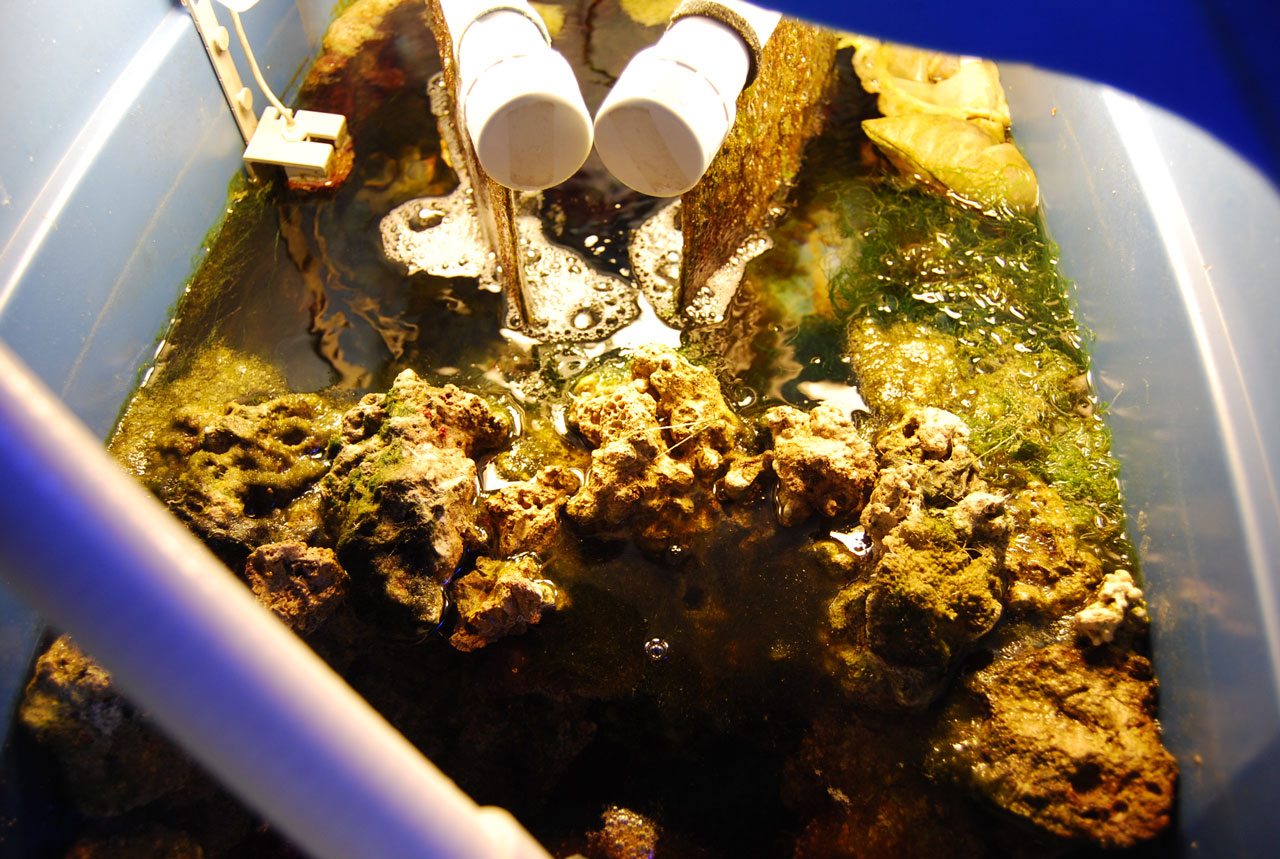