Huh, I like your theory of scary darkness. I've thought it may be slightly warmer temps in the sunlight, & in the case of my algae grazing loaches, good new food. They also like water changes & graze above the "new" water line...no accounting for "tastes" sometimes.
T

I hope all have been enjoying the holiday season and avoiding the virus.

I had mentioned i got six very small albino aeneus at my club's Dec. 17th X-mas dinner meeting. These went into my heavily plented 75 inwall tank. At first they all pretty much hung together, but once they settled in that changed. This morning it occurred to me that i had no idea if all 6 were still alive and well and I could not spot a single one.

So I dropped in a few sinking sticks and sat back down at my desk. After a few minutes I moved slowly towards the tank. At first I saw only 2 then 3. A few minutes more and it was 4. but that was it. So I sat back down and continued working on my PC.

After about 10 minutes I checked the tank again and I spotted all 6 out and about.

I have way too many plants, especially huge anubias. *sigh*
Expand signature
Vlad the Butcher.
Killer of women, children and old men.
J

Yea - this is my 40B; it has a bunch of orange laser cory but i have no clue how many; they do come out at front at night but if i shine a light in to see them they scatter. I also have some pygmy cory n the tank - i think 12 and i thought they all died since i hadn't seen any for several months and then one day they came a flying like a flock of birds....

here is a trick for getting close to a tank so you can watch the fish without scaring them. Do not walt up tp the tank. Get down on your hands and knees and crawl to the tank staying below it. When you get to the slowly rise up close to the tank and stop once you are able to see in. The fish do not seem to notice one;s arrival in this fashion and should mot be spooked if you do it right.

I get into staring contests with my big clown loaches. the trick is not to make sudden movements and not to "fill the frame." When we are large and moving in front of a tank the fish will know and will usually get spooked. To watch fish not on or near the bottom just tilt your head up.
Expand signature
Vlad the Butcher.
Killer of women, children and old men.
F

My MA clown loaches lived next to my computer & were never afraid. The "good" cave was closest to me & they liked either the screen or me. They seemed to like blue background sites like AC of old & Loaches.com. They'd all come to that end & face the blue. They also begged for food sometimes, loachy dancing near me. It almost always worked, spoiled cuties.
T

I turned 54 a few months after I set up my first tank. I quickly progressed to multiple tanks which usually meant a smaller tank on the bottom shelf of a stand. I used to call them belly tanks because I had to lie flat on the floor on my stomach to watch the fish for any length of time. To work on such tanks I had to sit cross legged on the floor.

It did not take many years for age to catch up with me. I found it very hard to get up after sitting that way for 15 or 20 minutes. This led to my insisting any under tanks must have it's bottom at least 12 inches above the floor. This also made vacuuming a lot easier. I would raise stands using stacked 4x4s joined together with metal plates and screws or a 2x6 frame. See the two stands on the left in the pic below. 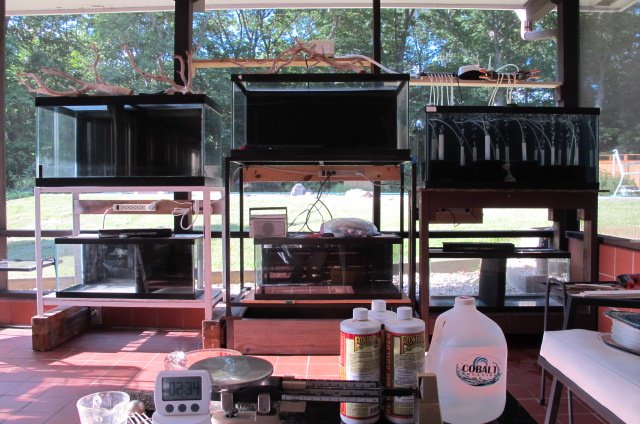 (The middle stand can hold a 36x18 tank over and under, the other two stand must hold a smaller size tank on the lower level.

I have a wheeled step stool with spring on the wheels. Stand or sit on it and the weight causes it to lower ont to the flor and not move. I sit on it when I work on under tanks.

This has an interestng side effect I enjoy. In most cases when I sit on the stool to work on the under tank I am also at eye level for the bottom of the tank above. I only stack 2 tanks on my stands. I have been able to watch some things I might never have seen sitting on the stool.

I once watched a male L236 who had grown quite a bit for the small cave he had claimed. he had convinced a female to spawn with him but when she went into the cave he could not fit. So the gal was willing but he was not able in his current cave. However, it is my practice to put a number of caves of different shapes and sizes into pleco breeding tanks and let them figure it out. He fit fine with room to spare when he first "leased" the space.

As luck would have it about 4 inches to the left of his cave was a bigger cave which was unclaimed. The challenge was how was he going convince the lady to abandon the cave she went into and go into the adjacent cave. More importantly, would he figure out his salvation was so close by.

During all of this I was working on the tank underneath which held another spawning group. So I was mostly paying attention to that. But when I was done and ready to move onto the next tank I noticed the pair was now together in the bigger cave. This whole thing was at eye level whenever I sat straight up on the stool.
Expand signature
Vlad the Butcher.
Killer of women, children and old men.
F

My hips & knees remember the low tank pain, mostly getting up but also sitting or laying down to see our habrosus corys. To make matters worse, they were very similarly colored to the substrate so I had to look close...It was supposed to be a QT, but, well, not so much lol. I was almost 10 years younger than you This was also our first Aqua Clear filter tank I think & we didn't realize it wasn't correctly tilted toward the tank a bit & it "peed" behind the tank a couple times. We couldn't see it & it was on carpet...finally noticed it lost more water than other tanks...live & learn

The next house I did low tanks I did boost them up for easier viewing & siphoning . Now the only time time I have to kneel or sit on the floor it's for canister filter maintenance. Fortunately not a frequent thing, wood flooring is even harder to get up off of than carpet these days But if I moan & groan enough I may get a spousal sympathy massage Not the same thrill as finding pleco spawns but nice
J

Yea I had one of those wire frame stands for two tansk; but the second was only like 4 inches above the floor - hated it - was a pia to work at the top due to the tank above and a pia to siphon water out and a pia to get on hands and knees to look in and a pia to clean under. Never again. Not sure how to stack tanks so there is enough room between the two tanks and still not too low to the floor.
T

I make a lot of my own stands and I only do 2 levels to insure spacing is easy on me. For the metal frame stands I elevate them by another 6 inches as in my pic above. The stand's bottom level is usually about 4 inches above the floor and I usually have to add a piece of 1/2 inch plywood. So I end up with the stand's lover shelf close to a foot above the floor. Then I want to have at least a foot or more between the top of the under tank and the bottom of the upper level. I need room to use a net.

I am no longer flexible.........
Expand signature
Vlad the Butcher.
Killer of women, children and old men.
Reactions: jake72
T

I just came back from feeding the six pleco tanks out in the guest house. Three are breeding tanks and 3 are grow tanks. In the TR L173 tank a trapping was in progress. In the Bidrovcan line 236 tank there were wigglers in a cave with and they were bouncing all over the cave. Finally in the super white 236 tanks there was at least one dad on eggs and new fry all over.

This is just what I need, more fry. Somebody needs to make me a fair offer for one of my breeding groups and a bunch of their kids. I have no space again ?
Expand signature
Vlad the Butcher.
Killer of women, children and old men.
You must log in or register to reply here.
Share:
Facebook Twitter Reddit Pinterest Tumblr WhatsApp Email Link
Top Bottom