This is what I do with the Penguin (Marineland) 350 filters I have. From 1st purchase, I modified the cartridges as shown, and disposed of the carbon (I don't need it, or use it). In this manner, each of the two sides of the filter gets 1 (modified) sponge cartridge, 1 ceramic noddles cage, and 1 biowheel. I also use prefilters in all intakes.
Rinse all every week (prefilters with tap water, filter material in aquarium water) and never have to buy anything at all. Works like a charm for years. 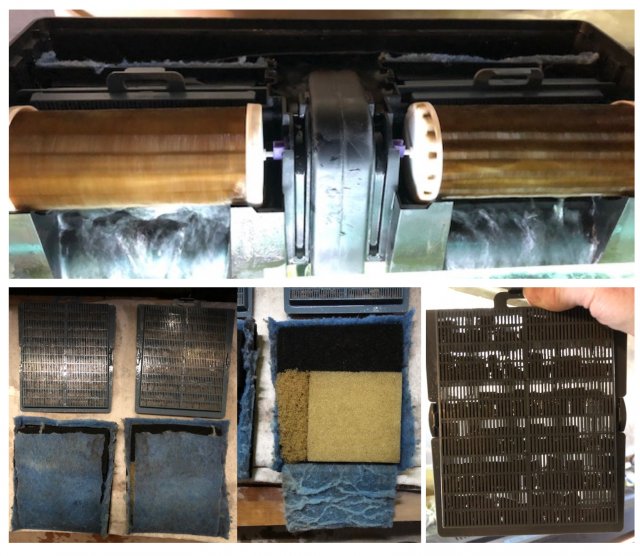 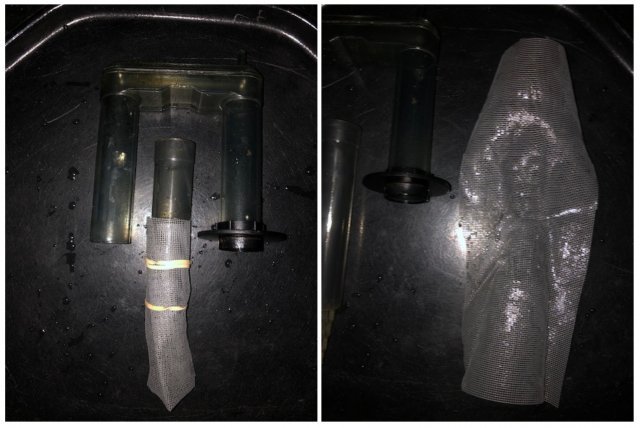 I think the tiny bit of activated charcoal that's in your typical store bought HOB cartridge does little/nothing good or bad. I've never had great luck rinsing and re-using HOB cartridges more than one or two times before they fell apart. The only filter floss I've gotten years of use out of is bulk floss that I rinse and reuse. I've got a layer of it in my Seachem Tidal 110 that's about 4yrs old and gets rinsed weekly.
Expand signature
75g Tiger oscar and green severum.
55g Community tank w/ plants.
55g Subtropical community tank w/plants.
Plants: java fern&moss, anubias, amazon sword, crypts.
Reactions: Wyomingite

I just rinse and use the media again. With no problem, any media can be used in another filter given it will fit. What I mean is that i have one chunky sponge filter, another one runs on two sponges and those plastic sticks are thin as young guppie fry.
Expand signature
Tank Journal:

Sprinkle said:
I just rinse and use the media again. With no problem, any media can be used in another filter given it will fit. What I mean is that i have one chunky sponge filter, another one runs on two sponges and those plastic sticks are thin as young guppie fry.
Click to expand...

What I was referring, specifically, to were those floss-covered "cartridges" used in most HOBs outside of the AquaClears, which look like this: 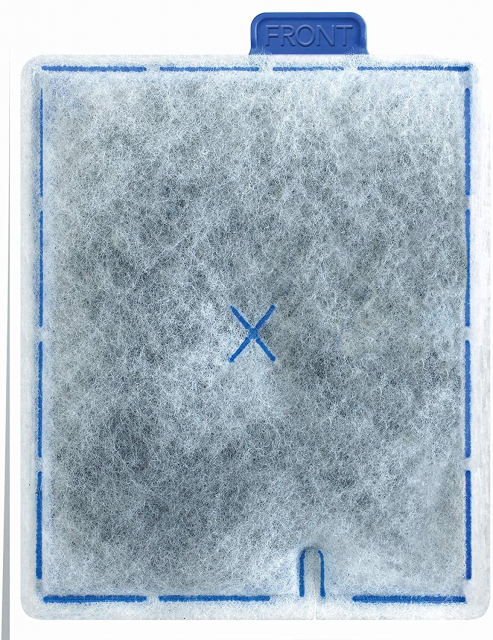 My Aqueon uses two of these, and what I normally do is just dunk them in a bucket of removed tank water from time to time, like I do the foam block in my AC110. I wanted to know if it was okay to do this with these types of cartridges, being that they're designed to regularly replace; I realize the carbon inside gets exhausted, but I am not concerned with that because I'm not using these carts for chemical filtration. So I'm okay with the carbon becoming a spot just to grow more beneficial bacteria.

You are totally fine to rinse and reuse.

You will likely find that the cartridges break down fairly quickly and need replacing.

It would be best to replace them with an alternative sooner rather than later just because of cost reasons.. I expect you can cut your own piece of foam to go in there or there may be reusable replacements on the market anyway.
Expand signature
Randon Chat Quote
i do love to slurp it in unencumbered by object
Reactions: dudley
K

As always, thanks 'orama.


fishorama said:
Since you have 2 filters you can rinse & squeeze the cartridge under running tap water...but not a good idea to clean both filters the same week. The floss type doesn't last nearly as long as foam & it kind of stretches out of shape. The carbon adds to the stretchiness, it settles down to the bottom even if you're careful.
Click to expand...

Indeed, I was considering rinsing these out in tap water for the very reason you stated -- that I'm running two filters (and because the Aqueon has those "bio holsters" the cartridges sit in, which are supposed to be where the BB resides in these units anyway). I've also read that people have gotten good results by just blasting these carts with a hose or kitchen sink hose, which usually loosens up debris caught in the carbon. I have to say. I don't usually see ANY dirt or debris come off these carts when I "swoosh" them around in removed tank water; the pads are kinda dark and dirty-looking, but perhaps this is all BB all over them?

To be honest with you, the AquaClear foam block in my 110 seems to "deform" and get "out of shape" a lot more than the floss around my Aqueon carts do -- the center of the block, right now, is bowed pretty badly in the center, and it's not that old. Two Tank Administration told me in a different thread that this is common now with the material Fluval uses to make these...

I would gradually quit using the carbon & save the packets for when you might need them (I have many! carbon pkgs). I take the floss sleeve off it's frame, rinse & slide it back on. It's good for 10? rinsings or so, less with carbon &/or aggressive squeezing & rubbing. It doesn't have to get perfectly white but try to get the dark spots out.
Click to expand...

Thanks; actually, I have done more than 10 rinsings already, I'd say, with these two carts, and the floss isn't falling apart -- however, as I hinted at above, the stains don't seem to be coming off them, but I don't know if this stuff is crud and debris attached to the floss or BB.

As for the carbon, I'm really not concerned with it; I only use the stock Aqueon carts because they're designed for the filter and it's convenient. But I haven't bought new carts since setting up the tank, instead swooshing and reusing the ones that are in there now -- in place since the tank cycled (you remember the thread of mine about THAT). This all plays in to why I began this thread in the first place -- I wanted to know if reusing these floss-covered cartridges was okay in the same way most of us reuse and clean the foam blocks of AquaClears.

I believe the carbon "leeching" toxins back into the water is a myth. It just quits adsorbing & becomes just another place for beneficial bacteria to grow. It really only works a short time, like maybe a week or so at most. I use carbon mostly to remove meds along with water changes. I change the carbon every few days when doing that.
Click to expand...

dougall said:
You are totally fine to rinse and reuse.

You will likely find that the cartridges break down fairly quickly and need replacing.

It would be best to replace them with an alternative sooner rather than later just because of cost reasons.. I expect you can cut your own piece of foam to go in there or there may be reusable replacements on the market anyway.
Click to expand...

When you say that the cartridges will break down fairly quickly -- do you mean the floss surrounding them? Not the actual plastic, right?

dougall said:
Firstly, I think that the carbon will potentially release stuff back into the water, but so slowly it should make no difference if you are performing regular water changes.
Click to expand...

So this MAY be true?

I do weekly 50-percent changes on the tank; should I be okay?

As for stopping using the charcoal, another property of it is that it is really porous and will hold a lot of beneficial bacteria. So if you decide to ditch it all one day, all the bacteria on it is gone too, and if that coincides with replacing the cartridge/floss you have lost a lot of bacteria potentially in one shot which could potentially be a bad thing. So removibg it all gradually or at once I would just suggest to do it at a time other whan when you replace the cartridge if possible. If not, test water to make sure there is no ammonia spike or a reason to slow down feeding ..

But most likely it should be fine.

Aa for rinsing in old tank water, we honestly use the chlorinated tap water without problem. But have built up to being comfortable doing so. I wouldn't say there is no risk, but chances are you would be fine.. especially with rotating cleaning between different filters.
Click to expand...

Thanks; yeah. I'm perfectly fine with the carbon being used as an extra spot to grow BB. I am not using the Aqueon carts for chemical filtration.

I wouldn't replace both carts from the filter at the same time, but, even so, isn't the whole tank a place for BB to grow? It's not only in our filters, correct, especially not one as "mechanically inefficient" (for the most part) as the Aqueon QuietFlows?