The filter which is shown in the picture is damaged , it is possible to add new filter and cycle it in the established tank? Please advice.
D

msubhan said:
The filter which is shown in the picture is damaged , it is possible to add new filter and cycle it in the established tank? Please advice.
Click to expand...

Probably putting the new filter on the tank and putting the media from the old filter into the new, assuming they take the same, otherwise run them both for a couple of weeks and slowly remove the media from the old, say a piece every day or two.. testing water will let you know if you cause problems with the ammonia cycle.
Expand signature
Randon Chat Quote
i do love to slurp it in unencumbered by object
F

Nice tank! I agree with dougall about the filter.

What substrate is that? Is it new? Some types leach quite a bit of ammonia for a month or 2 (I've heard, I don't use those). That might add to your high nitrate. Plants can use the ammonia but if you're adding NO3 too...

What ferts are you using? If it's separate types, like dry, you can cut back on NO3 or KNO3 or stop until you need to dose nitrate. Look up E.I. method dosing but go with a lighter dosing & 50% water change once a week to "reset" the tank water parameters. I believe that's what Tom Barr said he is now doing, EI "light" (he's a "plant guru" who actually tests different ways of keeping plants).
M

Thanks!! Substrate is platinum soil . Have attached the ferts(both front and back). Please have a look. Thanks for sharing E.I method.

Please suggest any new ferts and i can check the feasibility here.

Regarding filter :
As per dougall , the second option is pretty good. The current filter is not multistage filter and we cannot use the media.

This is my thought process. I wish to start from the beginning.... please advice

Add new multi stage filter to the tank without fish(will have this fish removed and go for alternate option) and cycle it for a month until beneficial bacteria is created. if this implemented can we add ferts to the plant and do regular water change or this should not disturbed until tank is cycled with new filter? 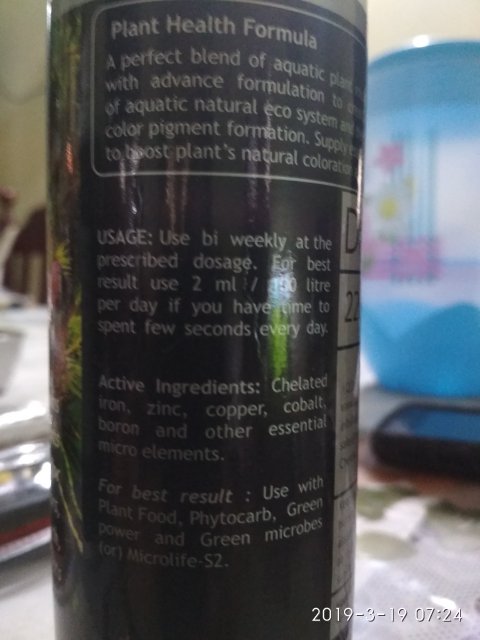 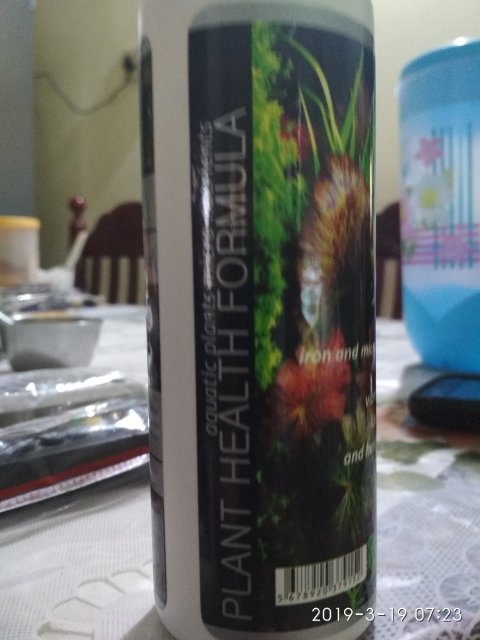 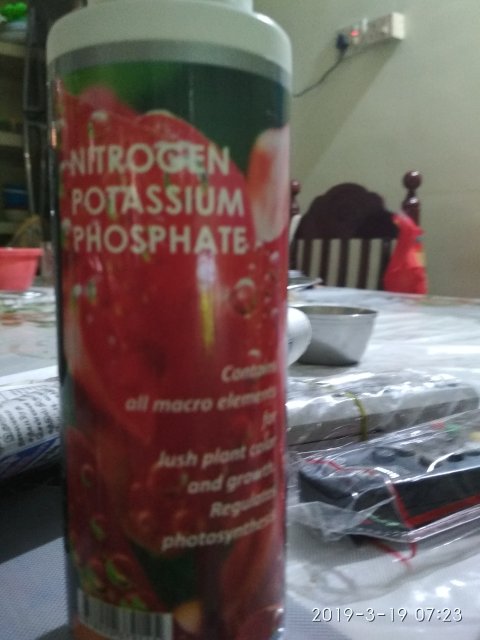 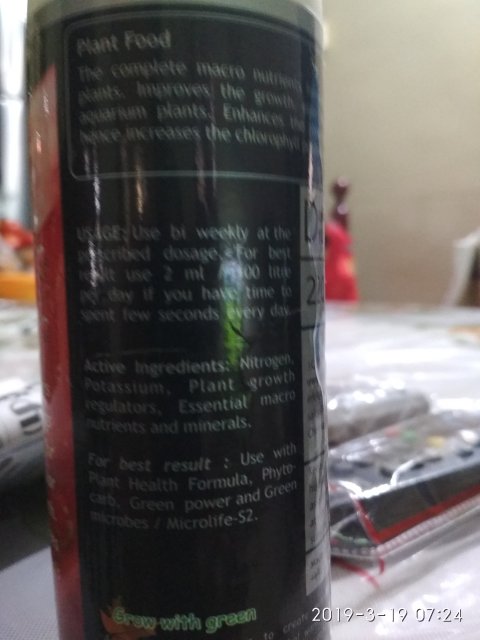 Why are you dosing more that twice the recommended amount?
Your stocking level is not the problem. No need to remove the fish unless you want a change, even if you replace with a new filter.
In that case just run both together for a coupleweeks or transfer media from the old filter to the new.
How often and how much do you change the water?
I'd do a couple extra 50% water changes and cut down on the ferts.
Also, as Fishorama noted, the soil may be leaching . This should steadily reduce over time as it becomes established.
F

Ok, the ferts are premixed macros & micros, so that's easy to dose & also easy to skip the macros until the nitrate level drops...a lot. You probably don't need to dose macros until your nitrate ~10ppm or less. You have enough plants, so you need to get a feel for how much & how often to dose. Test often to get the hang of it.

I agree with usedtobe, it seems like you're overfertilizing with both types of ferts.

& realize your plant substrate will "hold onto" the fert ions & micro nutrients. More is not better! Go slow & change 50% water once/week without fail…If you can't commit to that, dose even less ferts.
M

THanks orama and ustabefast. Please suggest the dosage for both red and black container shown in the picture. Thanks for your support!!!
F

I think I said, don't add the macros (the second bottle pic) until your nitrate level is a lot lower. I'd only add the micros (the top pic) once or twice/week. But I'm also the world's worst fertilizer. I don't want the maintenance issues that come from heavy ferts...& I'm lazy & forgetful, but it works for me.
M

oh ok Thanks orama, will add only the top pic black bottle once or twice/week(5 ml).
T

What brand of nitrogen are you dosing? Bear in mind that the best source of nitrogen for most plants is ammonia based. But we cannot add ammonia to a tank with fish. If you read the ingredients label for SeaChem Nitrogen it may surprise you.


The nitrogen comes from urea but the nitrate comes from the Potassium Nitrate, so you are adding nitrate as a side effect of adding the KNO3 (K = potassium and NO3 + nitrate). If the plants get all the N they need from the fish and the urea, the nitrate will not be used.

You have a pretty heavily planted tank with a smallish fish load. The plants will not be getting enough nitrogen from the ammonia they produce. Most plants prefer ammonium, but again this is not possible to add to stocked tanks. That is why your fert uses urea. Many plants can also use nitrate is insufficient ammonia is available. But this is a much less efficient process because the plants have to convert the nitrate back to ammonia to use it (the reverse of the cycle). When plants are taking up ammonia (as ammonium), they do not produce nitrite or nitrate in the water like the bacteria do. The end result is there should normally be little or no nitrate in a well planted tank and this then may need to be added.

In your case, if you are dosing too many ferts, you are putting the nitrate in. Generally, only a high light co2 added tank needs nitrate additions.

One last note on your testing. If you are using the popular API test kit or one that works similarly, you should be aware of two things. The first is this test is flakey. Bottle number two has a tendency to precipitate in the bottle leaving ingredients in solid form on the bottom. The less often the test is used, them greater the effect. Therefore, when you test you need to do two things with bottle number two. Bang the bottom on a table a few times to dislodge the solids and then, shake like crazy and repeat. You need to get the solids back into solution to get an accurate test.

Two more notes on nitrate tests. First, they are least accurate between 0 and 20 ppm. Second, the way they work is they convert nitrate into nitrite and then read that. So, if one has nitrite in the water when doing a nitrate test, the test results will read higher than the nitrate level really is.

Finally, your tank has no lid, so the water can easily evaporate. Nitrate doesn't evaporate. As the water evaporates the nitrate concentration in the remaining water will increase. You must remove the water with the nitrate in it to lower nitrate levels.
Expand signature
'Everyone is entitled to his own opinion, but not to his own facts." Daniel Patrick Moynihan
"The good thing about science is that it’s true whether or not you believe in it." Neil DeGrasse Tyson
"We already have plenty of youth, what we need is a fountain of smart." Unknown
Reactions: the loach
You must log in or register to reply here.
Share:
Facebook Twitter Reddit Pinterest Tumblr WhatsApp Email Link
Top Bottom