[FONT=&quot]Hello everyone![/FONT]
[FONT=&quot]There seems to have been a moderate interest in the muppy (male molly x female guppy) phenomena and I have decided to jump onto the muppy bandwagon. I hope you find interest in some of my findings. I believe I have cleared up some misconceptions. I am also hoping this thread will answer old questions and ask new ones. Let’s get started![/FONT]

[FONT=&quot]Thanks to b.greene,[/FONT]
[FONT=&quot]http://www.aquariacentral.com/forums/showthread.php?t=177253[/FONT]
[FONT=&quot]my inspiration has transcended into determination. I was determined to start this project and start it right. I knew it was possible, I just did not know how the fish would look. Both lucky77ca & b.greene have produced completely different looking fish. We’ll see how mine compare to theirs. [/FONT]

[FONT=&quot]Along my journey, I found several not cited photographs of this hybrid creature distributed throughout the internet. These photographs have revealed the many different forms this creature has taken on. Here are a few of them:[/FONT] 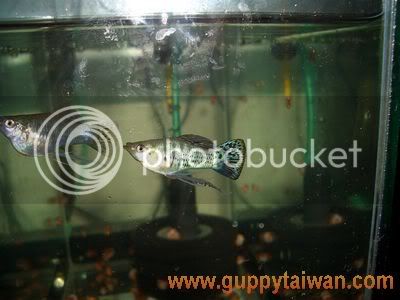 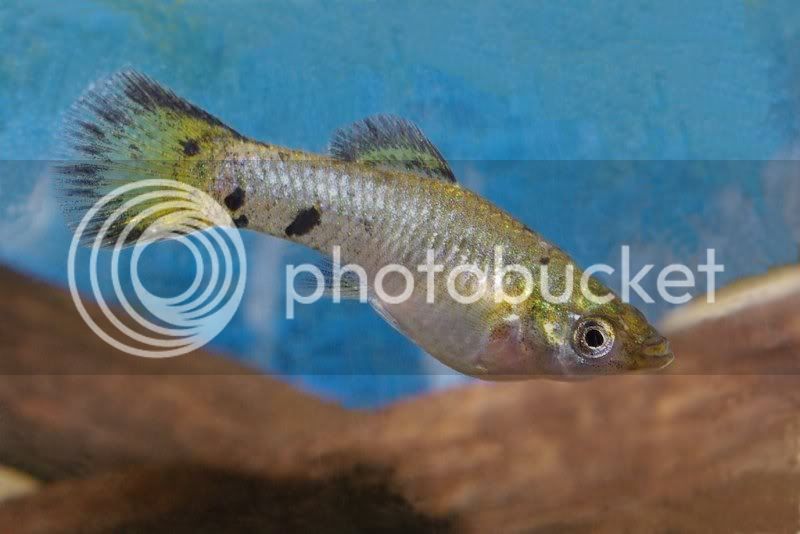 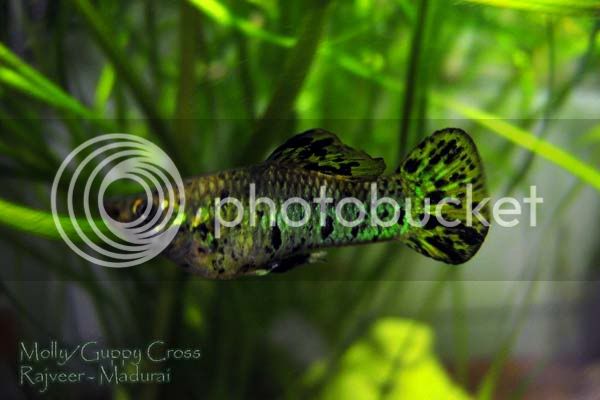 [FONT=&quot]Muppy Project (Stage 1): Auditions for Female[/FONT]
[FONT=&quot]In November of 2008, I had collected and segregated female fry from a variety of female guppies, consisting of stock from Petsmart and Meijer grocery stores. The fathers of these fry were selected from a lfs called The Ark.[/FONT]

[FONT=&quot]None of the fry were ever exposed to a sexually developed male guppy. This was a serious project and I intended to take every precaution imaginable in order to keep it straight. [/FONT]

[FONT=&quot]Meanwhile, I had been raising black mollies for some time and had acquired a batch of molly fry that were of interest for this project.[/FONT]

Female guppy fry who grew up for the roles as mother: 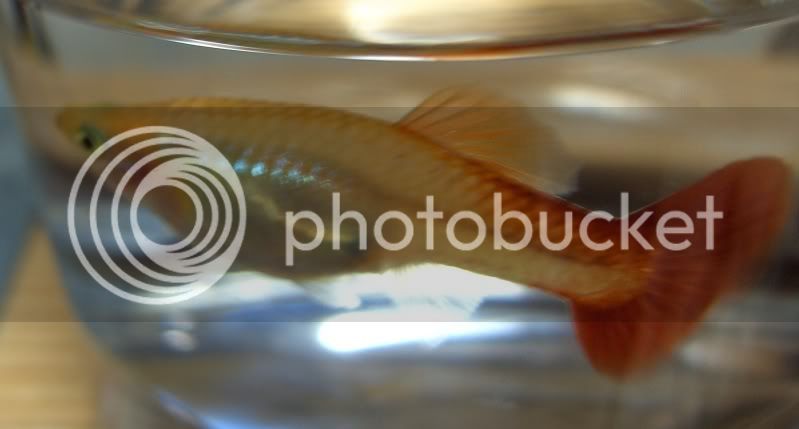 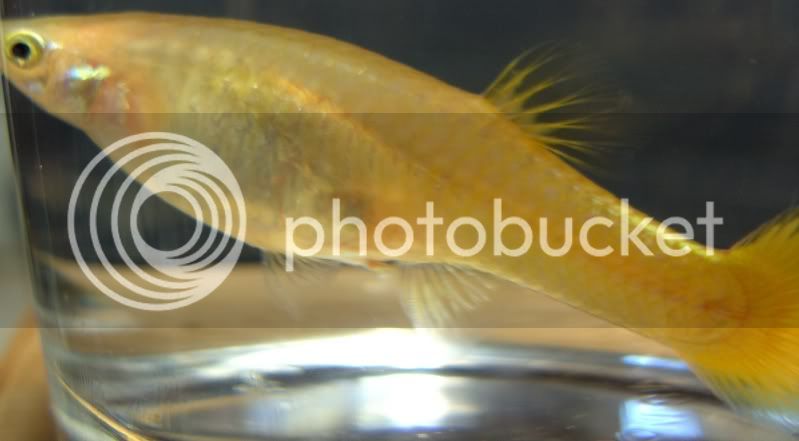 [FONT=&quot]Stage 2: Auditions for Male {part 1][/FONT]
[FONT=&quot]By December of 2008, a total of 15 female fry (pictured above) were placed into a well planted 30 gal. tank with a constant temperature of 82ºF. They were carefully treated with daily water changes while being fed a variety of high quality foods. The reasoning for using so many females was to better my chances for success.[/FONT]
[FONT=&quot]Meanwhile, I was in search for my leading man to take on the role as father. I had 3 male black molly fry that were up for the job. Once sexed, they were immediately placed into the 30gal. tank with the female guppies. Because these males were younger than the females, the females were allowed to properly mature prior to mating. My goal for the males was to have them predisposed to the female guppy prior to sexual maturation. Whether or not this practice makes for a successful a successful project is beyond me. It was suggested that doing so may condition the males to accept the female guppy as a mate.[/FONT]

[FONT=&quot]Stage 3: Auditions for Male (part 2)[/FONT]
[FONT=&quot]By February of 2009, I had 3 male mollies up for the role of father. Each had developed a well-defined gonopodium. Through a series of trial and error using a 10gal. tank, a few females and the three males, 2 of the males were more interested in each other while the third was clearly interested in the females. I found my guy. I realized this project would work best with a single male in the tank because the other(s) would only act as a deterrent. The other 2 males were eliminated from the project. [/FONT]
Leading man:

[FONT=&quot]Stage 4: Breeding[/FONT]
[FONT=&quot]My online research found one suggestion that placing the male with some females in a relatively smaller space will better my chances for a successful mate. I placed a small group of 4 females with the male in a 10gal tank for 2 weeks. I replaced the females with another group of 4. Since I witnessed the male courting the females, I knew it was going to succeed. It was by early March when successful mating had been observed. Shortly after, some of my females were beginning to fill in their gravid (late March). Food for thought: some darker colored guppies reveal a false gravid spot early on. I have no explanation for this phenomena.[/FONT]

[FONT=&quot]Stage 5: Success - Raising Muppy Fry[/FONT]
[FONT=&quot]On April 14, 2009, I came home to find 2 small fry swimming in the foliage of my 30 gal. tank. To my surprise, they were much smaller than expected. Had I not known any better, I would have mistaken them for normal guppy fry. They did not resemble that of a molly whatsoever. One of them was smaller than the other and slipped through the net while attempting to scoop it out. [/FONT]
First fry: 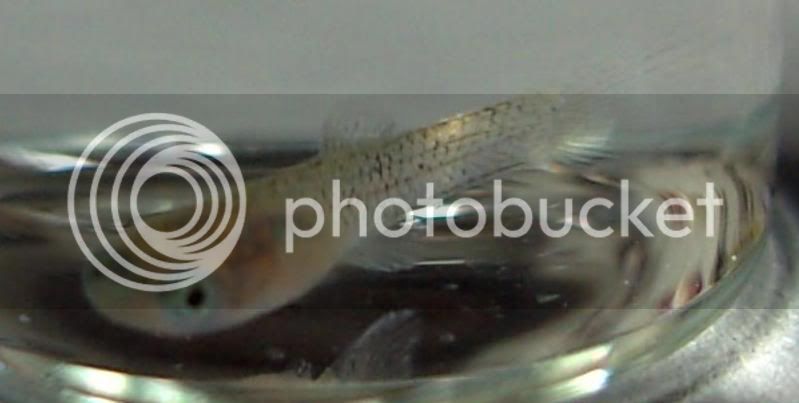 Fry from another drop:

[FONT=&quot]Important notes from first fry:[/FONT]
-[FONT=&quot]Relatively small fry size resembled that of an endler (guppy)fry[/FONT]
-[FONT=&quot]Both fry from same batch were slightly different in size and shape; one had a larger, crème-colored square-shaped chest while the other was smaller and slightly darker gray.[/FONT] 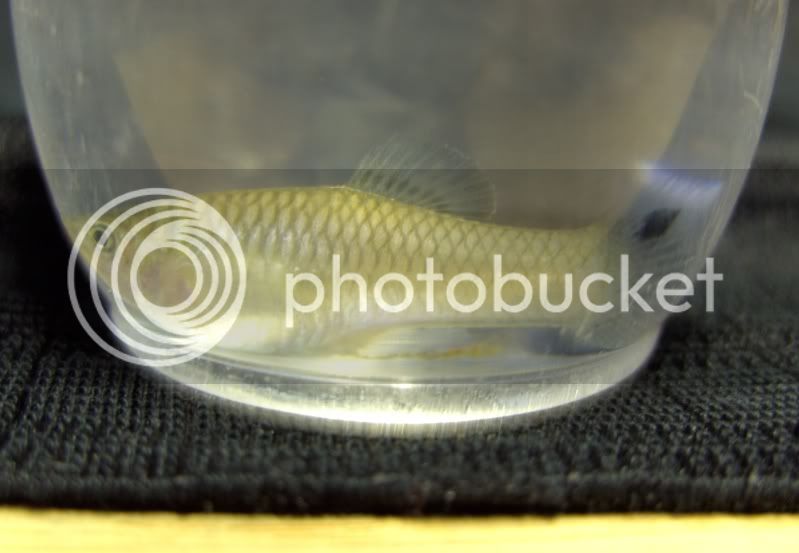 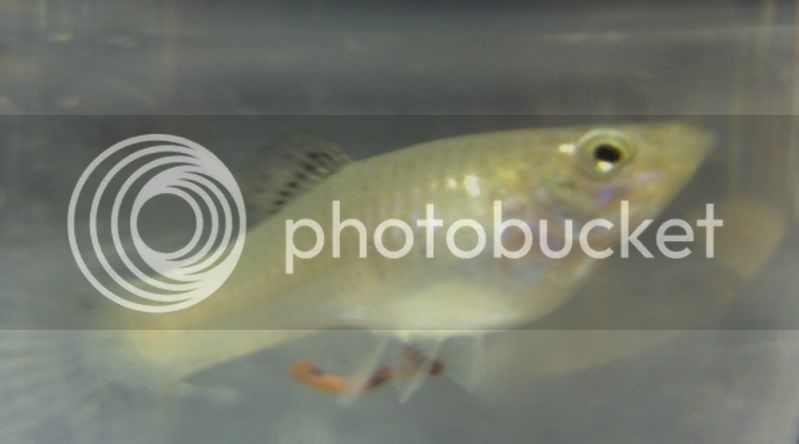 I apologize for poop in the pictures. The minute I put the fish into the photo booth, they poop. Because I find these sessions quite time consuming and stressful (Crappy camera!!!), I avoid having these fish out of their aquarium for longer than necessary. Both muppies photograph reveal the general characteristics of the whole. These 2 are believed to be male and the "spotted" male has exhibited signs of possible fertility (twitching of the gonopodium)

[FONT=&quot] Other comments:[/FONT]
[FONT=&quot] - None of the participants in this project have exhibited symptoms of discomfort in any way. Since tank conditions have remained the same since day 1, the female guppies have exhibited the same behavior as before they were pregnant. After drop #3, each guppy swims around happily as ever. My male black molly is even happier. Meanwhile, my muppy fry swim around happily as one can imagine. I am well in tuned with my fish and have no suspicions of any complications with the fish.
[/FONT]
[FONT=&quot]Questions:[/FONT]
[FONT=&quot]Since a few of my male muppies are exhibiting sexual maturation, should I consider matching them with mates (virgin guppies, mollies, muppies)? One the guys in question is the one with a black blotch on his tail, as seen in the photograph. This should produce a very interesting follow-up project.[/FONT]

[FONT=&quot]I will surely update you all on any further developments. Please feel free to post any inquiries, either public or via private message.[/FONT]

Very interesting and well written. They do look much more "guppy" than "Molly". We're certain the females were virgins? They can store sperm for a long time.

I don't know about Muppies but with many hybrid the offspring are infertile. If you had unlimited tanks it would be interesting to test all the above scenarios...

Muppy on Guppy. Muppy on Muppy AND Muppy on Molly- to see which combinations can (if any) result in offspring. Good chance none will work as they may be infertile.


If you had to pick one test though Muppy on Muppy would be most interesting- 2nd generation will bring about greater phenotype differences as recessive genes could be combined and displayed.
Mashed potatos and gravy.

Seems the norm is "muppy" but "golly" would be funnier.:rofl: :rofl:

"I love gollies."
"Huh, what is golly?"
"Oh golly...They're fish. Duh!"
Hakuna Matata! What a wonderful phrase! :dance:
Storm clouds may gather,
And stars may collide,
But I will love you until the end of time!​

^LOL
Follower of the teachings of the one called Lupester

Thank you all for your well received comments. I look forward to others' comments, including skeptics!

Very interesting and well written. They do look much more "guppy" than "Molly". We're certain the females were virgins? They can store sperm for a long time.

I don't know about Muppies but with many hybrid the offspring are infertile. If you had unlimited tanks it would be interesting to test all the above scenarios...
Click to expand...

Yes. I raised the guppy fry from birth and separated all males upon identification. I agree that the chances of having a fertile muppy are likely to be 0, however, I've NEVER heard of a muppy twitching his gonopodium. This behavior has never been reported to my knowledge. That does not mean that there is viable sperm produced, but it does mean that a courtship is possible. I will have updated photographs ready very soon as some of these fish are starting to color up, resembling somewhat of b.green's muppies!

Lupin said:
Seems the norm is "muppy" but "golly" would be funnier.:rofl: :rofl:

should be interesting to see what colors they turn out to be.
Jon
5-29 gallons
"Odd" Gallons (3-25 gallons)
"Middle" Sized Tanks (30-45 gallons)
55 Gallons
Bowfront Tanks and Corner Tanks
K

Most hybrids in fish within genera do appear to be fertile; crossbreeds between P. sphenops and P. latipinna are (most aquarium mollies are this cross), so I can't see why they wouldn't be fertile when crossed with P. reticulata.

Maybe you and the few other "Muppy" breeders can switch a few males and females to increase the likelihood of a successful spawn. At least the bloodline would be different while the goal is still the same.
?YouTube, Twitter and Facebook will merge to form one super time-wasting website called YouTwitFace? -Conan O'Brien

On page 500 of my 19th edition of Exotic Aquarium Fishes by Innes (ca. 1966) mention is made about this cross.
Democracy is two wolves and a lamb voting on what to eat for lunch.
Liberty is a well-armed lamb denying enforcement of the vote.