Yep, hope he makes it through quarantine period. He is showing signs of viral popcorn thing forget the name something something cystosis.

Oh well, what I've read, it will not kill, and when he settles in it will go away, and not very contageous to other types of fish.

Otherwise seems to have a great disposition eats some, hides some, comes out and checks me out at times, came for the photo below. 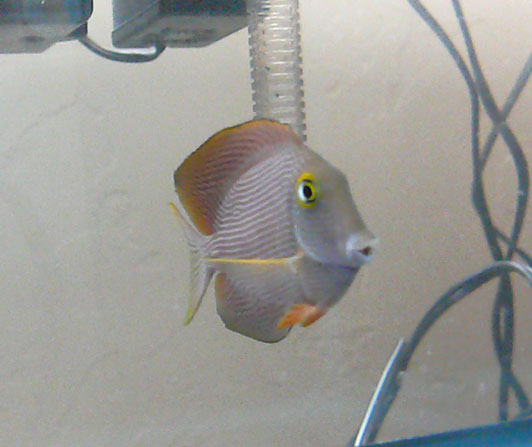 Favorite Quote: "A true friend stabs you in the front" Oscar Wilde

Actually I wish it were ich, I think it is this however, but not as bad as the pics here http://www.wetwebmedia.com/lymphfaq2.htm
39 gallon with paired maroon clowns, 6 line wrass and lawnmower blenny. 55 gallon with 2 neon velvet damsel, domino damsel and yellow tail damsel.

I shoot people with a Canon

Hard to make out much from the picture, i am aftraid, as to the ailment ( cant actually see any ailment from the picture...lol...besides a tad of whiteness around the mouth )...

Yea the lighting is dim in that tank. The white on his mouth was way worse when I got him, like puffy lips on the side, I treated as a bacterial, and it is almost gone.

He just has two white spots, one on the very edge of the top fin, salt size, and a small one on his face. I think if it were ich it would have matured and fallen off in the week I have had him. He is being treated as if he has ich anyway.

Otherwise, picky eater, but does eat. Looks good all around, a fairly tough little guy.

It's killing me not putting him in the big tank with all the algae to graze on. But, alas, been there with the ich before, not willing to rerun.
39 gallon with paired maroon clowns, 6 line wrass and lawnmower blenny. 55 gallon with 2 neon velvet damsel, domino damsel and yellow tail damsel.

Mine has been pretty sick since we moved...I just started treating him with melafix today.
Fish are friends; not food.

whats the problem with your fish mcsassy

Well salty, he had been pretty pale for a while and then he started developing some dark brown spots on his face and sides...but was eating and doing normal things. Today he has been hiding like crazy, I put some food in the tank and he came out looking like a zombie...peeling skin, white stuff around his mouth, looking like he wants to eat the food but he forgot how to...sad stuff I must say. He used to be the toughest, healthiest one out of the bunch. You can't take salinity and pH lightly...that's what was fluctuating since we moved the tank and it struck all 3 of my tangs hard, leaving them with ich and fin rot and leaving me with 3 deaths including 2 fire fish and recently my flame angel.
Fish are friends; not food.

Sassy, the peeling skin sounds like you might have Brooklynella. http://www.chucksaddiction.com/brookynella.html or do a search in wet web media and other reputable sources.