Everyone's probably sick of my tank by now with all of my updates, but, I can't help it. I love it and want to share it LOL.

The skilletfish that disappeared and then reappeared died. I found the half eaten carcass floating at the surface. The blennies and other skilletfish looked pretty fat! They still ate like pigs when I fed them. When it was alive, it had no signs of disease. I just stopped eating.

Here's a video update. The fish were a bit skittish this time, not sure why.

The male striped blennies are very bold. When I search the tank with my magnifying glass, the blenny that defends the left side of the tank often charges me, trying to scare me away from his territory. I've always wanted to catch it on film. Until last night, he was the only one that did it.

Last night, I was trying to zoom in and film the anemones in the sand at the front, center, of the tank near the glass. The male blenny that guards the back/middle of the oyster reef charged out and tried to attack me and the camera! I caught it on film, however, he was way out of focus and it looked like a big blur. So, I focused the camera on him, and tried to coax him to do it again. Only, this time, although he didn't charge all the way to the glass, it still turned out pretty cool. This video captures that event. This might be my favorite of the blenny videos that I made!

Reactions: the loach and dudley
D

I'm thoroughly enjoying your updates, thanks for posting them.
Expand signature
Dee

Last night, I was able to catch some really cool spawning activity on the video. One of male blennies was able to successfully herd the female blenny into a shell to spawn. He worked hard to get her there, but, he did it. The only problem was, it wasn't his favorite shell that he was hoping to herd her into. Still, it was really cool watching how he did it, and, I captured it on film. Also, to make this video even more interesting, another male blenny attacked the camera again, this time, an all out attack! Yesterday's vid was my favorite, but this one blows it away. I hope y'all like it!

I've got three videos to share for this update:

This first one is only 16 seconds long, and shows three of the anemones that I've found recently in the tank. Not long ago, I thought that all of the anemones died off. When I first discovered that they survived and reproduced a few weeks ago, I counted six. I counted a dozen last night. They're small, so I had to zoom all the way in with my iPhone, which made the video a bit shaky.

This next video is about a minute long, and showcases the male skilletfish (Gobiesox strumosus). This is the same male that was guarding eggs at the back of the tank in the previous video. He's since moved to the front of the tank and has established this clam shell as his new territory.

This last video showcases both naked gobies (Gobiosoma bosc) and skilletfish. I wanted to show more of them since most of my recent videos focused on the blennies so much. A blenny makes a cameo appearance at the end of the video. The video pans back and forth between the two species, and starts out following a couple male naked gobies posturing for territorial dominance. Later in the video, I captured the male skilletfish trying to coax the female skilletfish into his shell. This takes place after feeding time, so the tank substrate is still a bit messy. This vid is a little longer at 5 minutes.

I hope that y'all enjoy them.

I wasn't going to shoot a video last night, but, I couldn't help it. I saw this male striped blenny (Chasmodes bosquianus) corral a female blenny into his shell. I quickly grabbed my camera to see what happened next. His attempts to keep her in there until he could squeeze in with her were fascinating. After that, they attempted to lay eggs. When it was all over, I'm not sure if they laid any or not, because there may have been eggs in there already. It was a cool attempt though! This is the first time that I've witnessed this stage of blennies spawning. I've seen them corral a female into a shell, and I've seen them afterwards together in a shell, but, not this activity in between. It's a longer video, but, for blenny addicts, it's interesting. I hope you like it.

It's not a very good pic because of the angle that I had to shoot from, but, you can see the eggs that were laid during the filming of that last video. Those eggs were laid in just 11 minutes (the length of the video). I find that amazing. There weren't any eggs on that shell prior to the video. 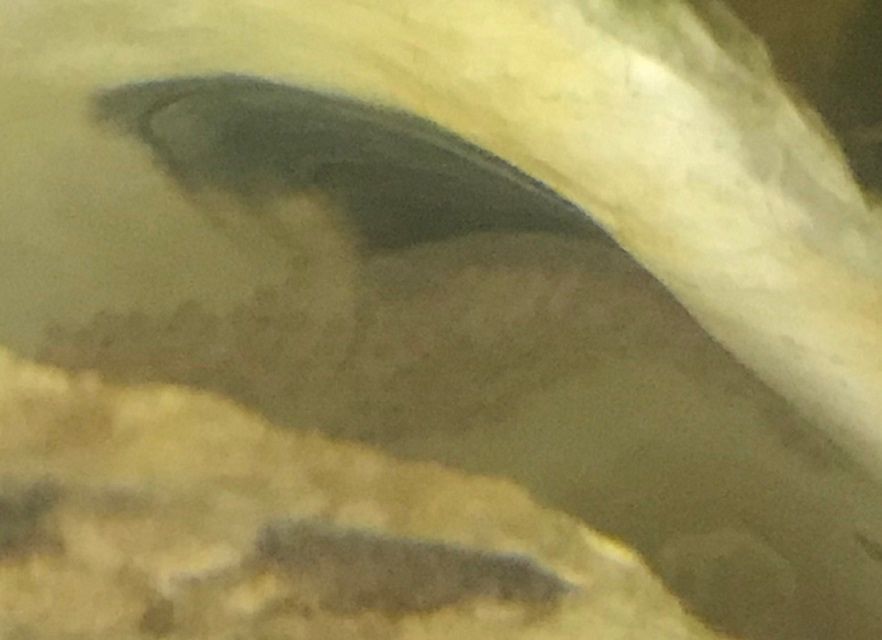 Here's a quick peek at a male striped blenny that comes out to attack the camera. You can see some of the spawning coloration, such as the blue spot and yellow/orange streak on the dorsal fin, orange tail, orange trimmed over yellow pectoral fins, orange lips and the orange/peach patch on the operculum.

Time for a video tank update, shot the other day after my "monthly" water change. Monthly is in quotes, because that is what I've decided on for a schedule. In practice, it's more like every third month, LOL. The fish were all curious and poking their heads out. I thought that the tank looked nice and bright, so, I took a video. Hope y'all like it.


As far as news of the tank goes. I saw blenny larvae the last few nights, so it's good to see the eggs hatching again. Remember I found 3 or 4 anemones last week, then 20 a few days later? Last night, I found 30 of them. They are all in the sand bed, none stuck to the glass or oysters. There are good many jellyfish polyps in the tank too. The lone barnacle is still hanging in there. And, I was worried about my large male skilletfish that wasn't eating. Three of the last four feedings, he ate some. He used to eat like a pig. Now, he's picky. I don't get it. But, at least he's eating.
You must log in or register to reply here.
Share:
Facebook Twitter Reddit Pinterest Tumblr WhatsApp Email Link
Top Bottom