Take a look at my cold water octopus tank

halfmoonplakat said:
wouldnt it be cool to like, breed ur octopus
lol i dont even know if that makes sense
Click to expand...

I've thought about it, and it is doable. I'd probably need a more stark tank, because the anemone and gorgonians would probably eat baby octopus. The easiest way would probably be to catch an adult female and hope that she had mated already so that the eggs would be fertile. If I had more room and was willing to dedicate a tank just to hatching and rearing baby octopus I'd try it. Also, it's illegal to sell the babies, or let them go in the ocean. I guess I could give them away.

Chilly Willie: thank you for sharing your tank, I have not had any experience with the cold systems and the colors of the corals you have are incredible. "Lefty" has some really incredible colors. Have you ever put her thawed shrimp or scallop in a small bottle for her to figure out how to get in and get it? It seems to be important to their longevity - the stimulation. Again, thanks....beautiful system.
Expand signature
"Failures are finger posts on the road to achievement." C.S. Lewis
K

wow how are the gorgonians doing? any die-back? what are you feeding them?

kingwintergreen said:
wow how are the gorgonians doing? any die-back? what are you feeding them?
Click to expand...

I don't think there has been any die back, in fact I think they are growing. I feed frozen rotifers and cyclops twice per day. I think the gorgonians are mainly eating the rotifers. They seem to be thriving, and I've had them for over 18 months.
C

In need of grace

Chilly Willie said:
Yes. It's a little different now, but yes. Those brightly colored strawberry anemones are on several halves of scallop shells, and when the octopus decided to lay eggs, she moved them all around to make a den. That beat up the anemones. Also since the anemones sting, they were taking a lot of space from the octopus. I bolted the scallop shells, and anemones, to the back wall of the tank, so now the octopus (a new one) can't move them, and has the run of the tank, except for the back wall. I still have the gorgonians too.
Click to expand...

how do the gorgonians seem to be responding to the diet at this point?
how is the octopus doing? any interesting learned behaviors?

kingwintergreen said:
how do the gorgonians seem to be responding to the diet at this point?
how is the octopus doing? any interesting learned behaviors?
Click to expand...

It's hard to tell because the gorgonians grow so slowly, and because I didn't do any measurements when I got them, but I think the gorgonians have grown. I've had them for over 18 months, so I'd say they are doing well. I feed them twice per day by turning off the return pump for 35 minutes so that the tank water isn't being filtered, and running a couple of power heads to circulate water (and suspended food) in the tank. With that frequency, the polyps are almost always extended. Three times per day would probably be better.

The octopus I have now is a little new. I caught him as an adult about three months ago. He generally likes to stay behind the rock pile, stuck to the back wall, and watch my family in the evening (the tank is in the living room) I suspect the capture was a little tramatic because he tends to duck into his cave when I get close to the tank, but not when my two year old gets right up in his face and bangs on the glass. I don't know if he remembers me as the guy that captured him, or if it's just a size thing. He is gradually becoming less afraid of me with each feeding. This octopus is not nearly as curious or interactive as the last one I had, which I caught much younger. I once caught her squirting water through the cracks in the overflow at one end of her tank, and onto the wall next to the tank. I've also noticed that I can intice him to come out from behind the rocks by using my hand to imitate the motion of an octopus. I make my hand crawl across me, or jet propell through the air with fingers trailing behind, and he will usually come out to get a better look.

I haven't taken any updated tank pics, but I did go tidepooling on Wednesday and Thursday last week, to catch the -1.35 ft. low tides. I found eight octopus on those two outing (a personal record). It must be mating season, because on two separate occasions, I lifted a rock, grabbed at an octopus, and came up with two octopuses!

There are a couple pictures of one of the larger ones that I caught. This one squirted ink in my face when I grabbed him (also a personal first) 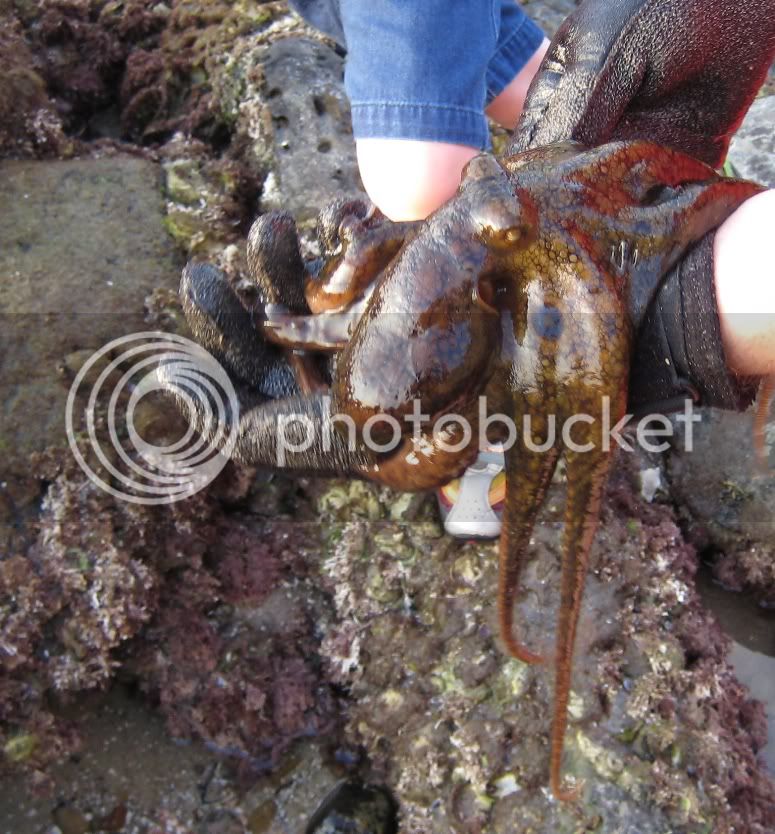 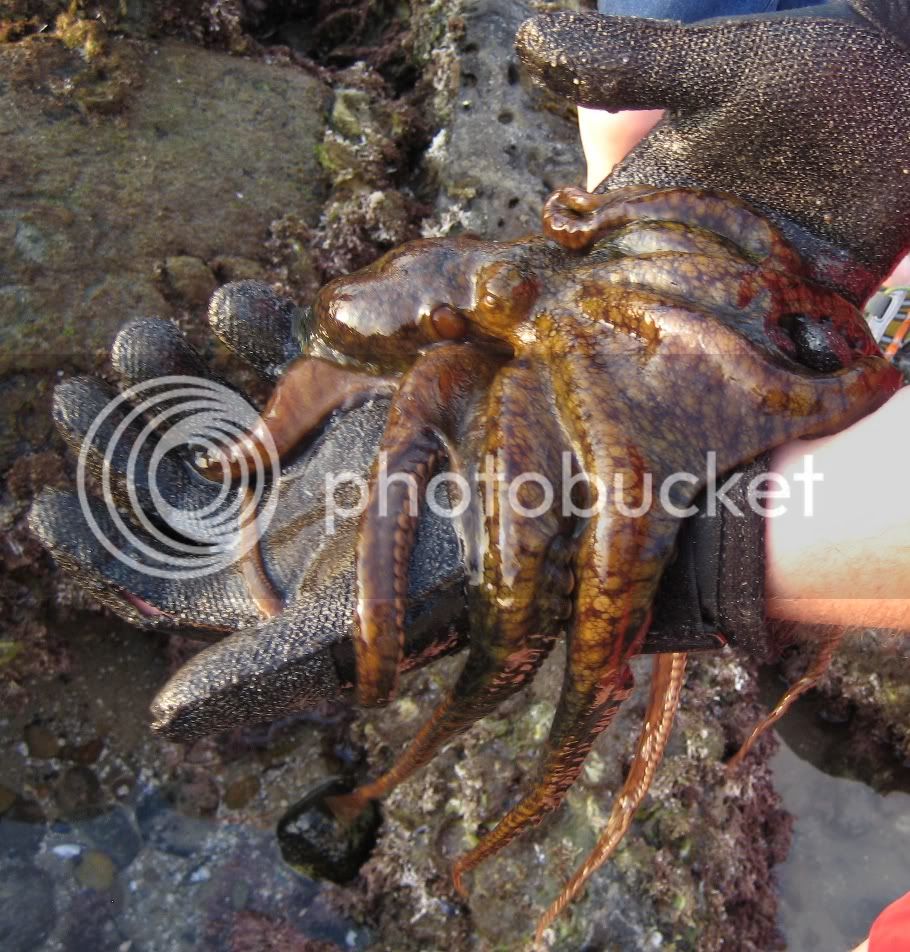 I already have an octopus at home, so after a little show and tell with my nephews, and some other tidepoolers, I let them all go. Two of the octopuses I caught were young (small) and I considered replacing the older/larger one that I have at home, because the life span is so short (18 mos?) and because the one at home is a little dull (afraid of me). The problem was that I have a strict one-way-trip policy for anything that goes into my tank, and I would have had to kill the octo I have at home. I never want to take the chance that an animal might catch some non-native disease or parisite in my tank, and that it could be introduced into the local population. Everything in my tank is local, but the frozen scallops I feed my octo are not, so my tank is like the Hotel California, he can check-out any time he likes but he can never leave.

In need of grace

I wish all wild collectors observed your one way trip policy!