Since it's cold and I can't give Ollie a walk (the princely dog refuses to walk when it's raining outside), I guess I'll start journalizing about my next project.

A few of you might remember this from the posting in Classifieds about a 50 or 75g tank in So. Cal for $50. I was one of the first people to contact the seller but I lucked out as another guy had seen the tank earlier that day but didn't take it because the tank was shorter than he (read: his wife) wanted. So I came later that day to pick it up.

Included in the deal was tank, stand, canopy (chucking this since it's got fungus and starting to fall apart), some gravel, a big biowheel filter (the one with two spillways), and an Ebo-Jager 200W heater (non submergible). I'm going to test the filter and heater to see if it works. Might keep the heater if it works but definitely selling the filter.

Tank has black trim and a glass center brace about a foot wide. Pretty good shape. No real obvious scratches.

Sunday (12/14/08): Moved the tank to the backyard and the stand inside the house. My parents and I spent about 15 minutes wondering where to put this behemoth (relative to our previous tanks) inside the house. We found a spot but I'll have to run an extension cord along the wall since there's no outlet on that wall.

Mom says I should paint the stand black. Since I'm living at home, I guess I'll have to comply.

Tank gets filled up to check for leaks and to soften up whatever was dried onto the surfaces.

No leaks. Sweet. Proceed to drain the tank and remove the gravel from it. After gravel removal, scrub the brown gunk off and start working on the water stains. Clean the whole tank, rinse out the vinegar, rinse a few more times...

But on Tuesday night, I sold an unused 25g I had laying around for $25, covering half the cost of the tank .

Equipment: Basically whatever I have on the 20G right now will be transferred over to the 55g. I'll be running 2 filters, the 205 and a 2215 I purchased a while back. I also have a 2213 that needs a little work but that will be an option as an add-on. Still need lights. Looking at the 4x54W Catalina T5HO but might be using it on 2x54W or 3x54W (if possible).

Will be investing in a Python for water changes. I'd need a bucket brigade if I was going to do it with buckets.

Inhabitants: Like the equipment, I'll be moving it all over from the 20g.

As a little teaser, a picture . 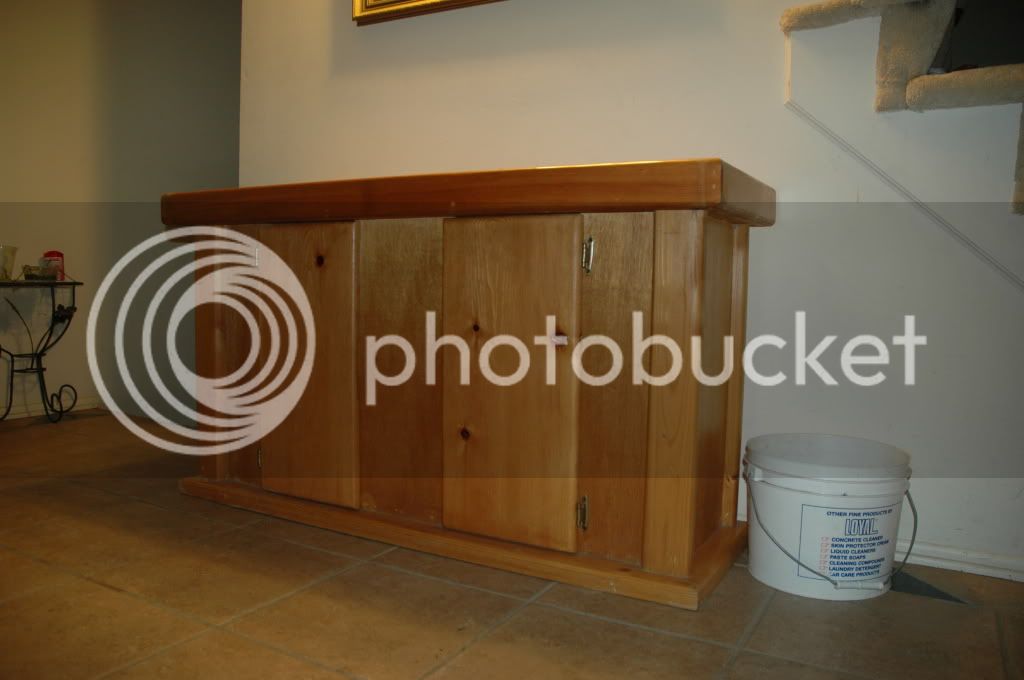 I'll be following this thread. That's an awesome deal considering what good shape that stand is in. I'd imagine the tank is in just as good of condition, if not better.

Thanks for starting a great thread.

Off-topic, I know, but for anyone thinking of getting a tank through Craigslist... Ignore the size they tell you and ask for length, width, and height measurements to figure it out yourself. They're rarely correct in their guesses.

Damodred said:
Off-topic, I know, but for anyone thinking of getting a tank through Craigslist... Ignore the size they tell you and ask for length, width, and height measurements to figure it out yourself. They're rarely correct in their guesses.
Click to expand...

Indeed. The guy didn't really know how big it was to start with. In the ad, he described it as 50g or 75g. That's a pretty big range. I didn't ask for dimensions but a picture and I got a general idea how big it was.
Expand signature
:equipment addict: lanted tank enthusiast:

Yeah, the last tank I got was advertised as a "35g" and I asked for dimensions... They even exaggerated the dimensions they gave me. Turns out it's more like a 25. Oh well! Okay, I'm done derailing your thread.

Good work. I am looking forward to seeing the progression of your build.
Expand signature
My Photos

More of My Photos

Shine On You Crazy Diamond

cool!!!!!
Expand signature
"I'm ashamed of you, dodging that way. They couldn't hit an elephant at this distance."
- General John Sedgwick, 1864