Will my female Krib accept a new mate...?

Regarding my kribs - F fishorama the one that I gave back to the pet store is the one that you thought was a different variety. The two I have left were both purchased as 'breeding pairs'. 'Truffle' was the first female I got and her male died en route.

Tramp is from the second breeding pair I bought, and he attacked his female till she came up with really bad popeye etc and finally died (yes, I removed her to another tank but it was too late).

So I ended up putting Truffle and Tramp together and hoped for the best... not so best atm LOL 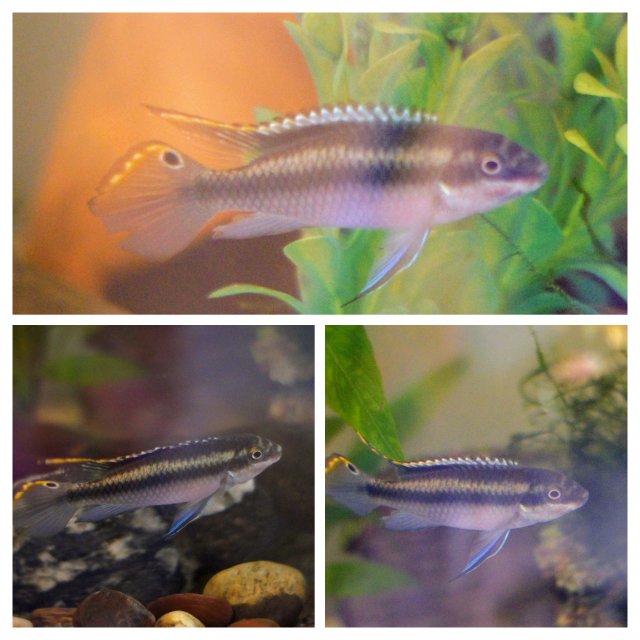 Just realised you can't see the barbels in the 'dead' photos. They all looked fine to me, long and healthy.
F

Have you tested your water lately? You need to do that ASAP & post the actual numbers, I'm worried...
A

Thanks, good you're testing...

If I understood correctly, Truffle the female is the fish in post #20? Have you actually seen Truffle lay eggs? Because the fish in post #20 looks like a male IMO. You can't rely on the red belly to differentiate as male kribs will get a pale red stomach when in breeding condition. Females are typically half to two-thirds the length of the male, have a well rounded belly that is a brilliant cherry red to magenta forward of the anal fin and the vent. The red/magenta is so much brighter than the male that it is easy to distinguish, and females retain this color even when not in breeding condition. They also typically show more brilliant yellow to orange on the rear dorsal and caudal fins, with pronounced spotting on both. I've had two pairs of kribs over the years, and in both I had to make sure that the male didn't tear up the female between broods.When you add that you said Truffle was beating up on "her" original mate, that isn't typical of either pair of kribs or either of the Nanochromis species that I've kept.

No, when truffle arrived, her mate was dead. It was Tramp who was beating up his mate - a very cute and tiny little female.

Regarding the 'gender' of 'Truffle' - F fishorama and I have had this discussion... she certainly has a more rounded belly than my other males, but she's big. Bigger than tramp. Probably 3x the size of the other female I had that died.

I agree her fins look like they'd be on a male. When she colours up only her tummy gets red, Tramp gets red from tummy right up to his mouth, which to me sounds like male and female.

I have seen truffle 'vibrating' briefly a couple of times (the male showed no interest) so I got excited and decided yes she's definitely a female... but I'm wondering now whether it wasn't vibration at all... more rather 'aggression'.

I could still accept that 'she' is possibly a 'he'. Can't figure the rounded tummy though (it's not really rounded, but from what I've read males don't have any roundness at all...).

No I've never seen her lay eggs. I find it interesting that you say that the males prepare the mating/egg site though - because 'she' always hides away in her caves and spits out the sand. I never saw the little female do that, but the male (Tramp) did it when he wasn't chasing her off... (he got really rough with her when she decided it was time to mate, she would vibrate in front of him and just never back off, he'd just ram her - I concluded that I'd bought a 'pair', not a 'breeding pair' as advertised...)

As for the male staking out the territory, I didn't remember for sure. It's been maybe 10 years since the last time I had kribs. Maybe a little more. I definitely remember that when my kribs mated they went back under the rocks and I didn't see anything of them for multiple days until all of a sudden there was a swarm of fry and both parents were out being protective. I never saw any breeding displays. In both pairs that I had and a couple of other pairs that I've seen that friends had, the belly of the female was always bright red, always much stronger in color than any male, even when they weren't breeding. I can usually look in a tank in a shop and determine males and females with 95%+ confidence just by size and coloration. I've actually been playing with the idea of getting another pair. With a total lack of red on the belly in those pictures Truffle has to be male, and after what you said in this last post, I'm even more convinced Truffle is a male and what you've been seeing is territorial aggression.