After losing my betta Nero recently due to my own cycling errors while transferring him into a new tank, I decided to buy an "active" sponge filter from Angel's Plus (I have never used a sponge filter before either). I currently have it running in my 5 gallon tank, with water that I treated with Prime and let sit for 24 hours, as well as substrate and the plants/decor I plan on using. I am leaning heavily towards a fishless cycle, as I don't want any more fish to suffer. However, I am confused by the surplus of information I'm encountering on other websites, and was wondering how often you would recommend checking the parameters/performing water changes and if there is anything I should consider adding (Stability, TSS, etc.)?

I'm hoping my tank might be ready for a new betta by the end of the month. <3 But I am going to wait as long as it takes to ensure no fish has to suffer because of my lack of knowledge...
S

Didn't the cycled media come with instructions? I have never done that option. I'd "think" you'd want to add fish soon...I'm sorry I don't know better...Let us know how you get on...Good luck!
T

The idea beinnd buying cycled media is that it works right away. You do not need to cycle the tank because you have a cycled filter.

The foundation of the cycle is ammonia, it drives the entire process. There are basically two ways to get get ammonia into the water for the bacteria. The first is in a tank with no fish, you add ammonia directly either as ammonium chloride which is a powder (or can be bought as a pre-mixed liquid). The second is from fish and the process of organics being broken down.

There are also two ways to jump start a tank with live bacteria. The first is bottled bacteria which arrives in a state of dormancy and is awakened by the presence of ammonia, The second is in the form of cycled media (or by rinsing out such media in the water of the new tank). This bacteria is awake and active but, if not fed, it will go dormant.

The proper way to work with your cycled sponge is to either add fish right away or else to add some ammonia to keep the bacteria active until you do add fish. Depending on the tank and planned contents, the amount of ammonia should be sufficient to resuult in a concentration anywhere from 1 - 3 ppm .

I just cranked up my bio-farm to get 14 foam filters cycled. 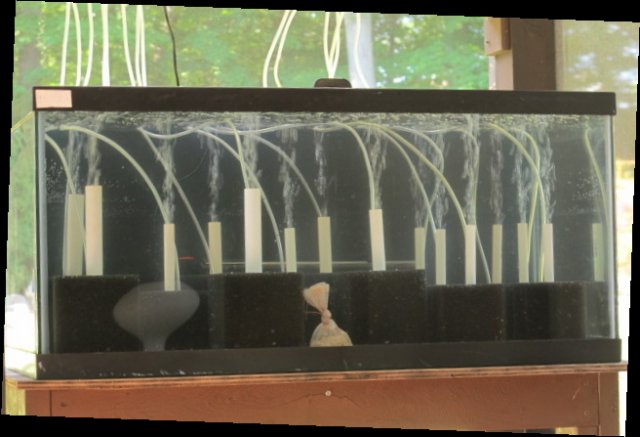 Expand signature
'Everyone is entitled to his own opinion, but not to his own facts." Daniel Patrick Moynihan
"The good thing about science is that it’s true whether or not you believe in it." Neil DeGrasse Tyson
"How do you make a cycle go faster? Pedal harder." A. Nonny Mouze
Reactions: FishAddict74
S

i never cycled my aquariums or filters and i use multi test strips, always says they are clean

super tetras said:
i never cycled my aquariums or filters and i use multi test strips, always says they are clean
Click to expand...

"clean" is not a test strip or any other testing method result...We need actual parameters numbers or at least a range...

But with your plan to add just 1 betta, I'd think you need to add him very soon or add something (0.5-1 pmm ammonia or a very small amount of fish food) to keep the sponge beneficial bacteria alive. Act very soon, the beneficial bacteria will go "dormant" & will need a few days(?) to multiply...but 1 betta...just get him! Skip feeding for a couple days. test, water change if needed for a few days & pretty much done...
T

I have not been to the A P site in a while. I assume you got the 50 ppi small filter. it is god for a 5 gal tank reasonably stocked. For one betta it is perfect. Get the fish like fishorama said.
Expand signature
'Everyone is entitled to his own opinion, but not to his own facts." Daniel Patrick Moynihan
"The good thing about science is that it’s true whether or not you believe in it." Neil DeGrasse Tyson
"How do you make a cycle go faster? Pedal harder." A. Nonny Mouze
You must log in or register to reply here.
Share:
Facebook Twitter Reddit Pinterest Tumblr WhatsApp Email Link
Top Bottom