Well it is basically done. Maybe an invertebrate or another nano fish, but I wouldn't feel comfortable adding anymore fish past the 1" range... 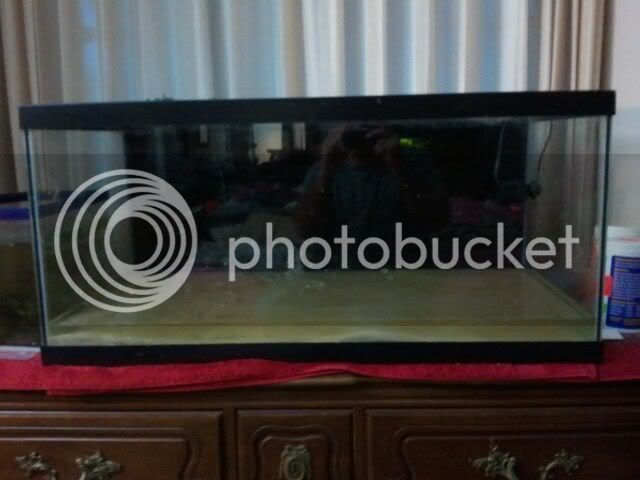 Went with a black background this time. First time I've bothered with a background on a tank and I'm really liking it. Except for the fact that it granted the black Lyre-tail Mollies the power of invisibility... :laugh: 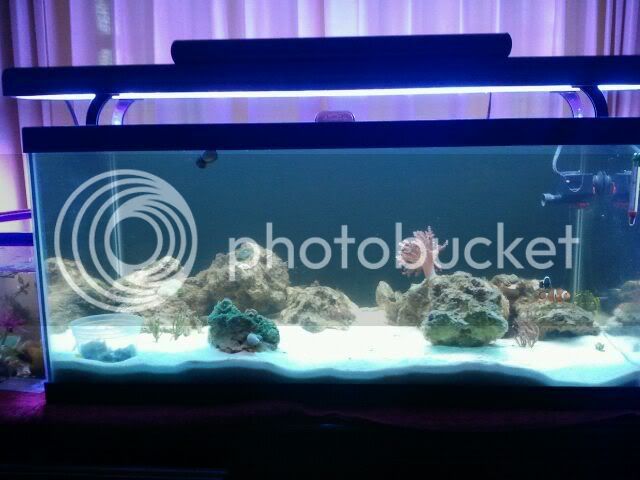 Early setup from earlier in the week. Was till in the process of breaking down the 120 and sorting what was going where. 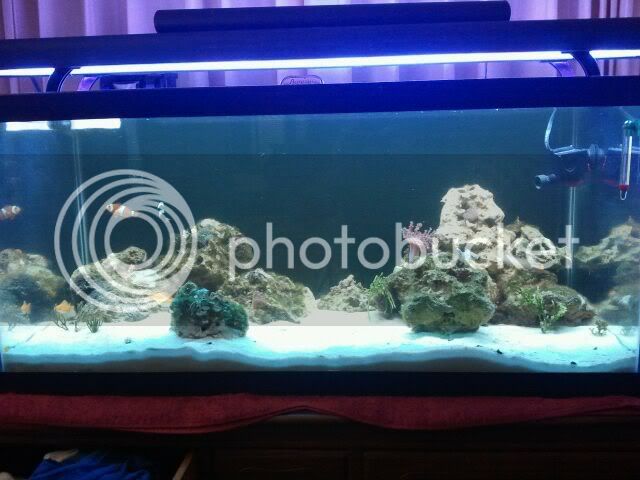 A bit more rock and a few new corals... 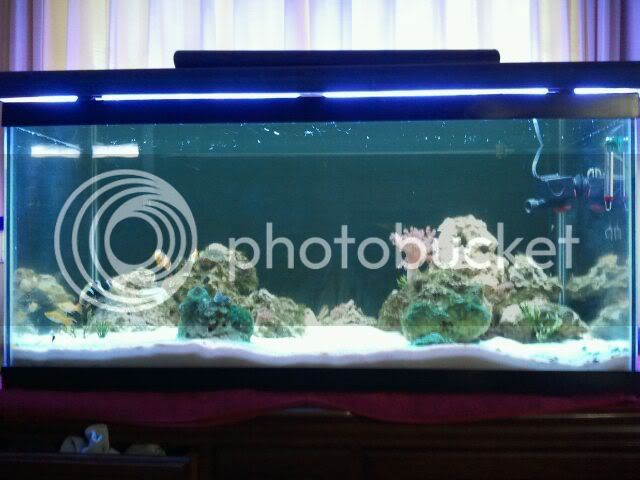 And the final layout. Macro algae will probably more around, since the Urchin likes wearing the Cactus Caulerpa (and in turn, the stuff he wears seems to grow faster then normal, so no need to discourage it). Looks like the macro setup will be a couple forms of Halimeda and Cauctus Caulerpa. It was going to include Red Gracilaria, but the Urchin decided that stuff tastes good. :swear: 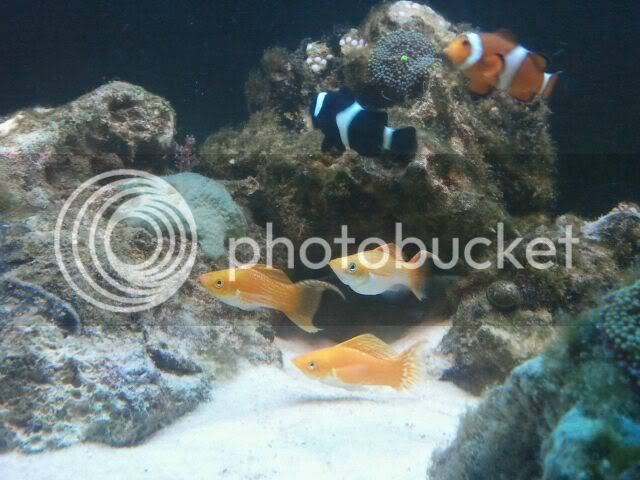 Saltwater goldfish... :laugh:. Was originally supposed to be a group of Creamsicles, Blacks and Dalmations. Expected some die-off but was hoping the groups would blend since the die-off should be roughly even across the board... only the Dalmations died off. :huh: So now there are two groups that want little to do with each other, one group of 3 (2m/1f) Creamsicles and one group of 2 (1m/1f) Black (otherwise known as "What Mollies? I don't see any black Mollies in there!").

Weird pattern I noticed that formed. My orange Clown took to the Creamsicle group. I was actually worried at first because she (I think it is the dominant one) would wipe out the group since she turned one from a Lyre-Tail into a standard Molly. But she has calmed down and now occasionally swims with them. The black Clown took to the Dalmation group and was a bit more rough with them. And they were a bit more willing to push back. They just weren't any match for a Clown since their idea of pushing was to swim circles around him and his idea of pushing was to nip and harass. They didn't get the chance to settle in and I'm still not sure if it was the stress of transfer to saltwater or the Clown that wiped out their whole group. I'm suspecting the clown since all of the black Mollies and creamsicle Mollies survived. 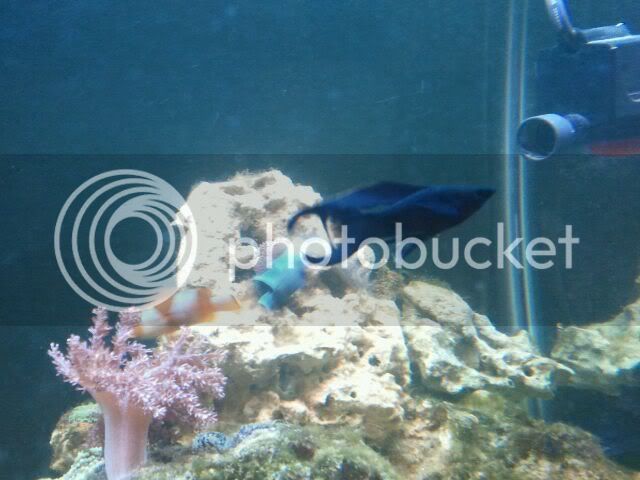 Proof that they do in fact exist...even if no one sees them most the time... :laugh: 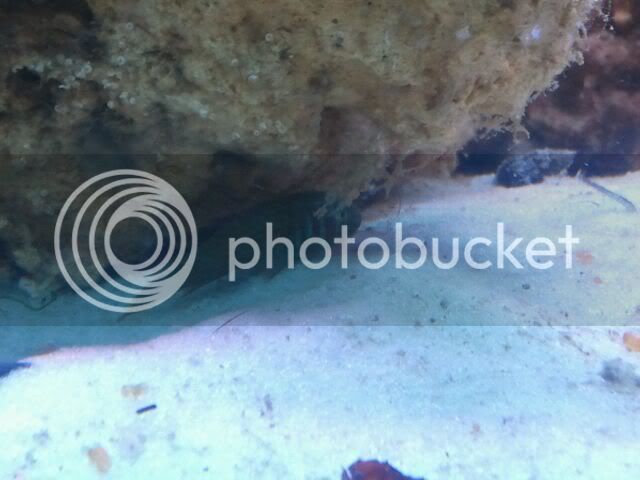 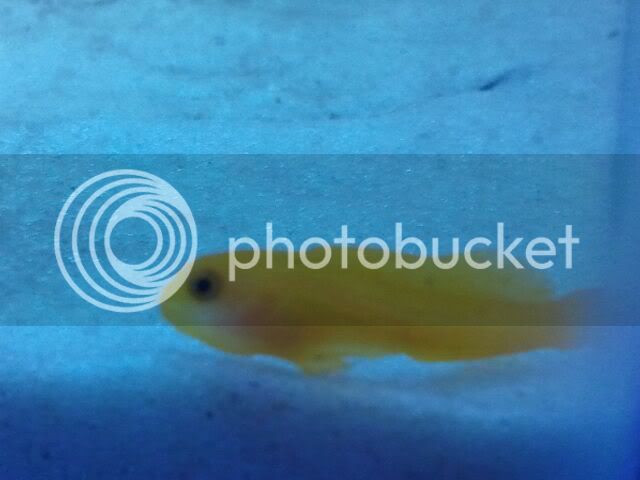 The Clown Gobies. Have a small group going now. Was originally planning on a bunch of them, but after getting 1 Yellow and 3 Green I think that is it. The Greens had some territorial behavior but seem to have sorted it out in a rather simplistic way...they decided to divide up the whole tank, rather then fight over the same rock. :laugh: Once they decided who got the rock with the big tree growing out the top it was pretty smooth from there. They seem territorial in a comical way. Like a "how can that possibly be threatening?!?!" sort of way. 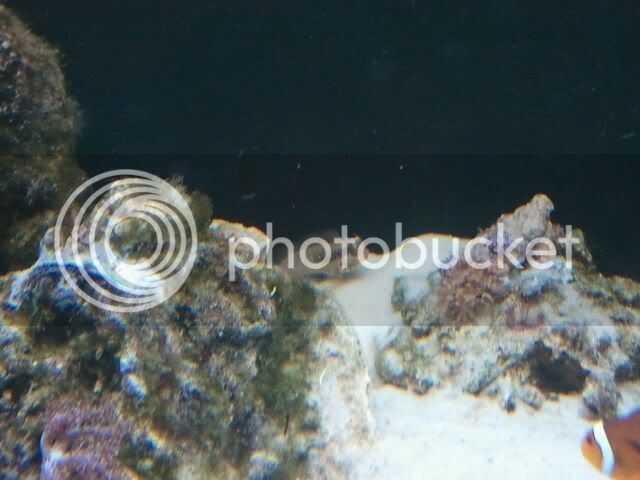 This little guy had quite an adventure. Couldn't find him at all during the transfer. Couldn't find him for days as I prepared to trade in the live rock and remaining fish. Had given up on getting him into the new tank. At the LFS that we traded the rock in the manager is pulling rocks out of a bucket and I tell him "There may be an Algae Blenny in there since we still haven't found him", next rock he pulls out has a rather stressed Algae Blenny resting on top of it. :nilly: Luckily I kept water in the live rock buckets since, even though people ship and sell live rock simply wrapped in paper, I can't bring myself to trust live rock that isn't soaking in water. 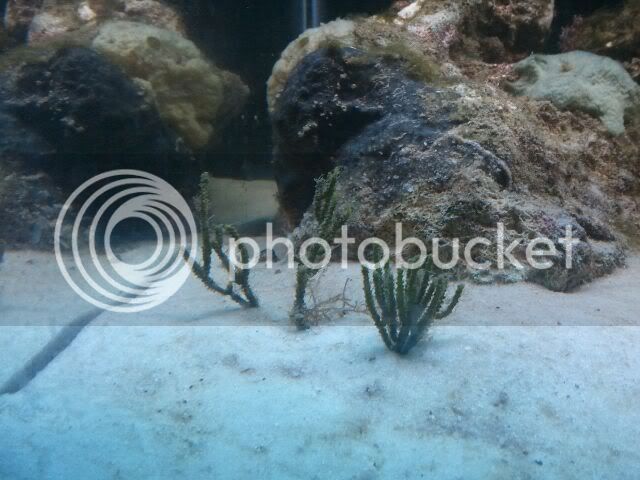 Caulerpa Cupressoides. Probably will be the primary patch. The second patch of the stuff is currently a hat. 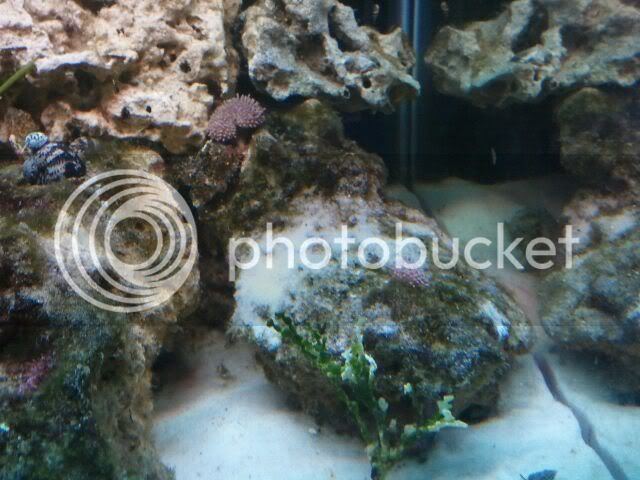 Halimeda and a couple new Toadstools. Sugar grain sand...gonna have to talk to that sand sifter about where he grazes... 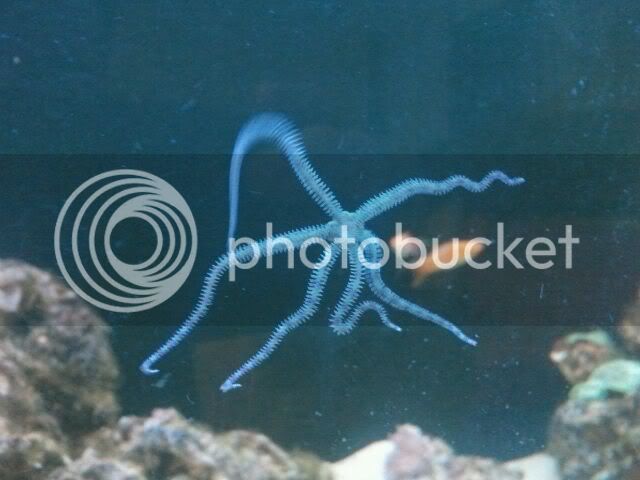 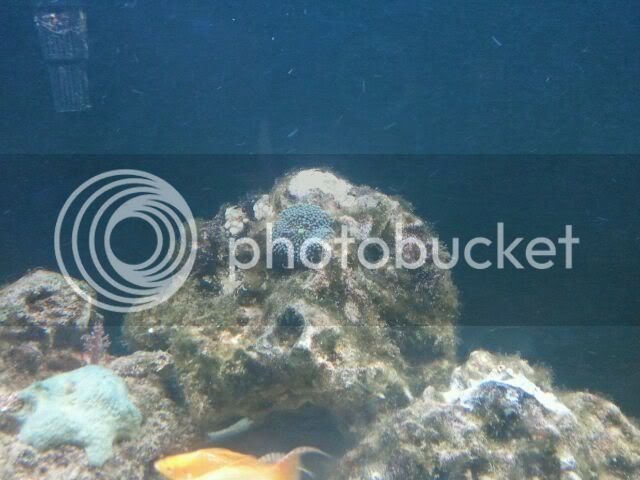 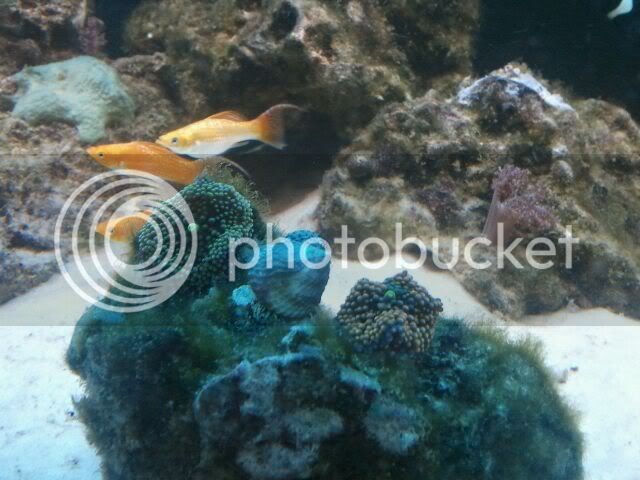 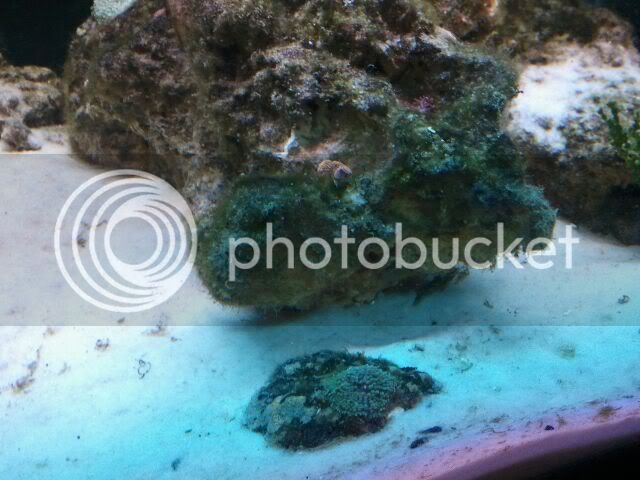 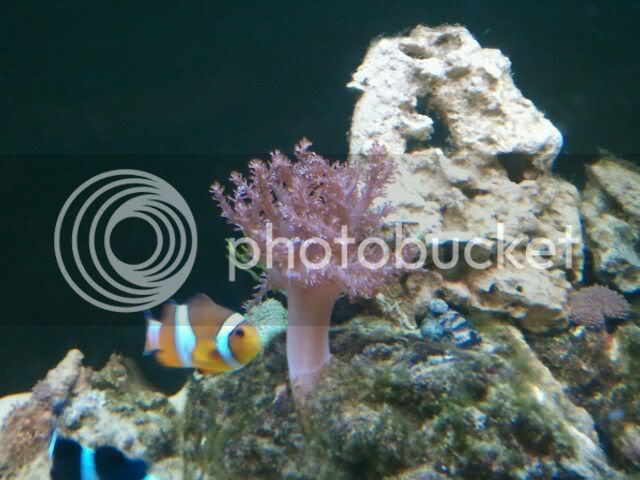 Cut one branch off to frag. Will hopefully get at least a few new Kenya's out of it. It has recovered very quickly and is already regrowing the branch. 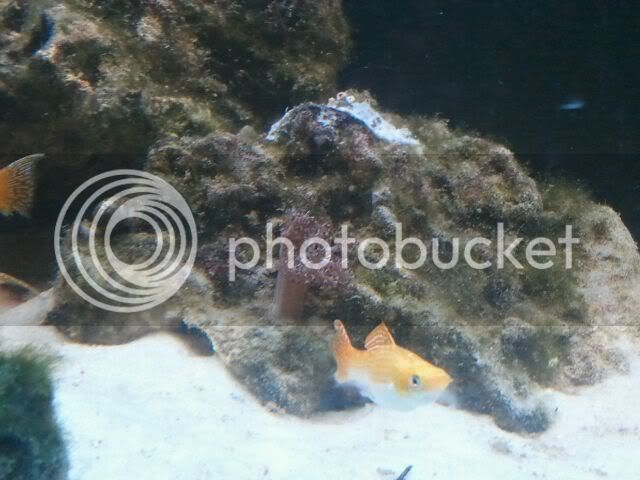 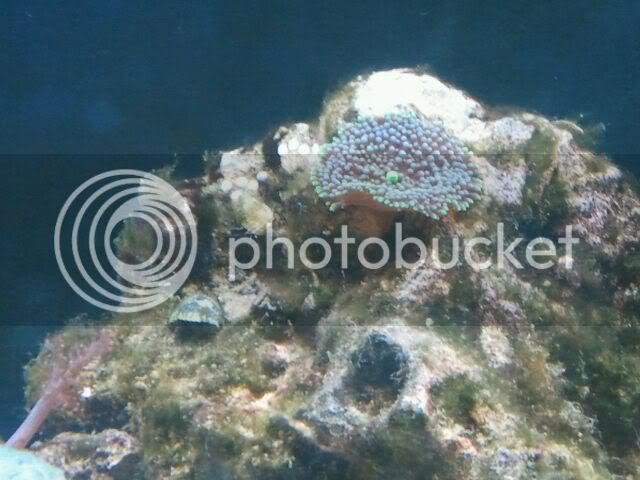 Not sure why the hermit crabs always insist on hanging out together. They did it in the 120 also. These two were from the display portion of the 120. The ones from the refugium unfortunately didn't make it. Actually...a whole lot from the refugium didn't make it. I didn't realize at first that when the heater broke it cracked open and contaminated the water. Luckily there wasn't enough water left to circulate the system so the damage was limited to bristleworms and whatever snails I didn't remove on day one of the move. 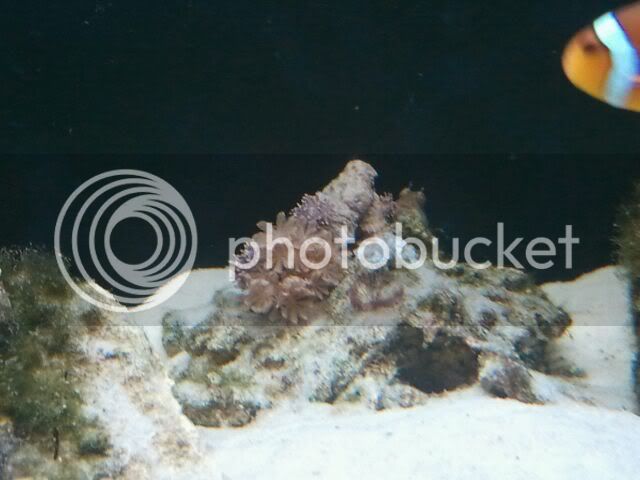 New Xenia frag. Well, multiple frags really. Two groups of two different types of Xenia. With a slightly nervous Algae Blenny peeking around the corner...
Last edited: Jul 27, 2012
Expand signature
?Light thinks it travels faster than anything but it is wrong. No matter how fast light travels, it finds the darkness has always got there first, and is waiting for it.?
- Terry Pratchett

you are hypnotized! LOL

awsome! also proves that mollys do infact live in SW lol, ( i think guppys can it? not sure about that one though )
Expand signature
help save monster aquaria network! sign the petition please! http://support.monsterfishkeepers.com/
have 30 tanks, onces set up now are four 20G one 20L one 10. but have tanks from 5 gallons up to four 55s

I had briefly considered Guppies. One of the original concepts I threw around with this tank was a giant pico tank, basically a tank past the "nano" scale but stocked like a heavily stocked pico tank.

The reaction from the fiancee was "You'll have to edit all the pictures that go onto the forums. People will laugh enough that you put Mollies in there. Just imagine the response if you put Guppies in!". :laugh:


Both can go into saltwater. It is the flow that they can't always handle. I think I could safely double the flow in this tank and still keep the Mollies. This is very low flow by saltwater standard. A full SPS setup would probably plaster guppies to the glass.
Expand signature
?Light thinks it travels faster than anything but it is wrong. No matter how fast light travels, it finds the darkness has always got there first, and is waiting for it.?
- Terry Pratchett

greech said:
Your fiancee is very wise :thumbsup: . I might have had to use my ban stick if you put guppies in there. At the very least we would have had to pull your SW card . Looks great! Always freaks me out when I see mollies in SW.
Click to expand...

The really weird thing about it is the black Mollies are naturals.

They all came from the same place (well, not literally but the same chain), but the creamsicles still keep trying to act like standard Mollies in a freshwater tank. The black Mollies on the other hand act like saltwater fish. They have a territory in the rockwork staked out and a series of tunnels and caves to run to when threatened. When they were in the freshwater planted tank they were standard Mollies, cruising around the surface constantly looking to breed. Not sure what has caused the difference but it is quite interesting to see.

In fairness to the Guppies though, while the horror of Guppies in saltwater was a big part of X'ing them off :laugh:, it was also the attrition rate. I'd have been using feeders (since no one gets in Endler's around here). I've had 50% die-off acclimating feeders to a moderate flow freshwater setup. I doubt it would have been lower then a 75% die-off acclimating to saltwater setup, and then the math hit since I would have wanted at least a dozen swimming around. :nilly: No need to kill a whole feeder tank just to get a tank of saltwater Guppies...
Last edited: Jul 27, 2012
Expand signature
?Light thinks it travels faster than anything but it is wrong. No matter how fast light travels, it finds the darkness has always got there first, and is waiting for it.?
- Terry Pratchett

I got 3 lyretail mollies the other day... But for FW, it's amazing how the same species can live in both! I got the mollies so I could feed the fry to a lionfish.

Why get a SW tank if you want guppies? I wouldn't even consider that...That would be a complete waste of money...


Sent from my iPod touch using MonsterAquariaNetwork app
Expand signature
Need a website for your company? Want to start a blog? Want to have your own online store? Email me at ptrick125 (at) gmail.com
​

Looks good. When I was tossing dalmations in my 90g they acted like dumb freshwater fish a couple swam right into anemones.

Do the green and yellow clown goby interact at all or do they act like they're separate species?

TL1000RSquid said:
Looks good. When I was tossing dalmations in my 90g they acted like dumb freshwater fish a couple swam right into anemones.

Do the green and yellow clown goby interact at all or do they act like they're separate species?
Click to expand...

Did they get stung?


Sent from my iPod touch using MonsterAquariaNetwork app
Expand signature
Need a website for your company? Want to start a blog? Want to have your own online store? Email me at ptrick125 (at) gmail.com
​

TL1000RSquid said:
Do the green and yellow clown goby interact at all or do they act like they're separate species?
Click to expand...

They act separate, but I'm not sure if that is normal behavior or if something is wrong with the yellow one. The yellow one just sits on the sand in a specific spot all the time. It responds to stimuli around it but doesn't go beyond that little corner of the glass, along the sand. I do see a green one occasionally sitting next to him, but no harm seems to come of it. Not sure if it is normal for them or if this one was too far gone. It doesn't act sick or dying though. Just like it has no reason to move.

The greens are all over the tank and interacting a lot though.
Expand signature
?Light thinks it travels faster than anything but it is wrong. No matter how fast light travels, it finds the darkness has always got there first, and is waiting for it.?
- Terry Pratchett

Ptrick125 said:
Did they get stung?